Mr. Ragone, who the Observer profiled last August, was longtime friend of the mayor’s and a veteran of Democratic campaigns. He assisted Mr. de Blasio when he ran for a school board position in 1999 and lent advice from California, where he served as San Francisco Mayor Gavin Newsom’s press secretary, when Mr. de Blasio made an unsuccessful bid for City Council speaker in 2006.

After Mr. de Blasio was elected mayor in 2013, Mr. Ragone, a New York native, relocated from San Francisco to work for the mayor in what he always called his “dream job.” Earning an annual salary $212,614, Mr. Ragone was regarded as perhaps Mr. de Blasio’s most trusted aide–for better and worse.

Mr. Ragone’s approach to politics and the press, religiously adhered to by Mr. de Blasio, could be polarizing. As the Times noted, he bragged about not reading tabloids and often ignored more quotidian controversies in favor of a hard focus on long-term projects that he believed Mr. de Blasio would always be remembered for.

While Mr. Ragone’s style–sage-like, he called it the “long-view”–could pay off, like when Mr. de Blasio receded from view after police unions battled the mayor in December and January, it occasionally failed in New York’s bare-knuckle media market. Mr. de Blasio’s frequent tardiness, mocked repeatedly in the press, was perpetually viewed as a non-issue in City Hall until he shocked mourners by arriving late to a memorial service in the Rockaways. A chastened Mr. de Blasio made a rare apology and began to come to more events on time.

If Mr. de Blasio’s approval ratings are any judge, Mr. Ragone’s work has been decent–but not exceptional. Only about half of voters consistently approve of the mayor’s performance over his first 13 months in office, despite a robust economy and falling crime rate.

Mr. Ragone becomes the second high-level aide to leave City Hall in a little over a year. Rachel Noerdlinger, once the chief of staff to Mr. de Blasio’s wife, Chirlane McCray, was forced out last November after a series of scandals surrounding her boyfriend, an ex-convict, made her position in the de Blasio administration untenable.

While Mr. Ragone’s early departure from City Hall is surprising, he hinted last August that he would not be with Mr. de Blasio for his entire mayoralty. Mr. Ragone’s family lives in San Francisco and he can easily exceed his governmental salary in the private sector.

“I don’t know if I’ll be able to. I love working for him and I love being around him and Chirlane,” Mr. Ragone told the Observer when asked about his desire to stay in New York. “Whatever the course takes over the next eight years, I will always be around them.” 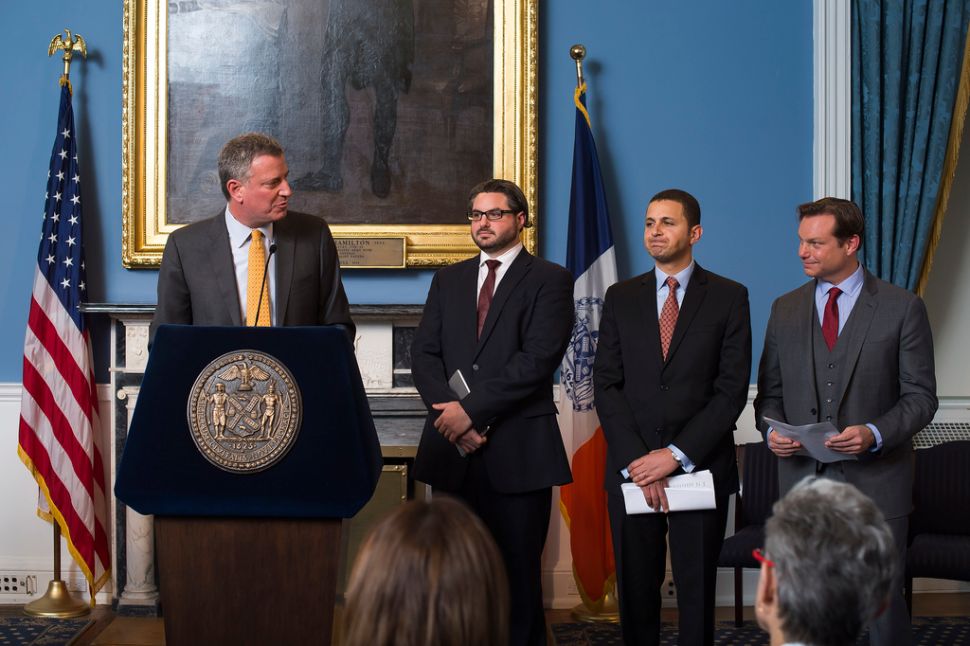