The penultimate episode of this season of Top Chef had them all. And it’s a testament to how good the remaining three chefs were that, even when falling victim to those traps, everyone made pretty great food. Nobody fell prey to the biggest pitfall on Top Chef, the Salt Monster, which is a real relief considering last year the winner consistently under-seasoned all competition and yet still won

In the last episode before the finale, it’s a battle between Gregory, Mei and Doug. They’re all likable and all really great chefs. It’s probably easiest to root for Doug—he came back from Last Chance Kitchen, he cooks relatable food, he seems like an awesome guy to hang out with. So it hurts all the more that, after his astoundingly triumphant return just a week ago when he won the Quickfire and the elimination challenge, Doug is the one going home.

His troubles started in the Quickfire, where the chefs are tasked with cooking using fresh farm veggies—and chocolate. This probably wouldn’t have been a big problem for Doug, except that the chefs have to make both a savory dish and a sweet dish. While most people would think turning chocolate into dessert would be pretty standard, Top Chef contestants always hate dessert and Doug is no different. Gregory hits it out of the park with a carrot-ginger-chocolate dessert. Mei pulls off chocolate yogurt. And Doug melts some chocolate with chocolate booze. It doesn’t go over great.

The chefs get to choose their sous chefs from eliminated contestants which means, yet again, George is coming back. Not that there’s anything wrong with George but he seems pretty impossible to get rid of. Gregory selects him as his sous chef, while Mei picks Melissa (duh) and Doug goes with Katsuji. Katsuji proves a smart choice because he speaks Spanish.

But when the chefs are required to pick two traditional Mexican ingredients for their dishes, Doug all but predicts his elimination. He doesn’t act fast and gets stuck with escamole, or ant eggs (which seem to taste a lot better than you’d imagine, I guess). Doug does not seem to think this is fair—he says it reminds him of when George got stuck shucking clams because Gregory insisted on breaking down mackerel instead, and George wound up getting sent home over it. And unlike George’s episode one elimination, there won’t be any chance to come back from this challenge.

Gregory far and away wins the challenge, delivering a well-liked guava soup (and fruit soup can be a disaster, Richard Blais notes…by the way, Blais is back!) and the best dish of the night, a pork poblano stew that makes one of the esteemed Mexican chefs tear up and declare “This is Mexico.” It’s really nice to see him bounce out of the mid-season slump he’s had.

So it’s Mei and Doug who must battle it out, and from the judge’s comments—and the edit, which includes Mei talking about trying to make her parents proud—I honestly thought Mei was going home, not Doug.

Her first dish is a guacamole. It’s the Top Chef finals, and the dish is guacamole. It is too simple. It was a cool guacamole that looked like a sushi roll, but Tom said it wasn’t even the best he’d ever had. Her second dish goes over much better—a pasta filled with her second ingredient, some kind of corn fungus? And the broth has a lot of corn flavor. They really like it.

Doug’s first dish is the escamole, which is traditionally served with eggs. He serves it that way too, sort of stacked like fritatta in a tortilla with potatoes. He adds an escamole aioli to it—fun, Richard Blais notes, because aioli is made with eggs and these are ant eggs! But the textures all sort of meld together into kind of mushy, and despite adding tons of escamole, the flavor gets lost, and the judges want to taste more of it. His second dish goes over well—but it’s still a tough one, as he takes on the last course, a cheese plate. He makes it inventive and fun and tasty with the required ingredient, Mexican queso, but it’s still the closing cheese plate.

In judging, it basically comes down to the second dishes cooked by Mei and Doug: the ravioli and the cheese plate. Padma likes the cheese plate better, even though she disliked Doug’s first dish the most. But Tom disagrees—he thinks Mei’s ravioli is better than the cheese plate. And, as usual, what Tom says goes.

Mei went too simple. But the other pitfalls added up for Doug. He did too much in the escamole dish. He got stuck with the escamole in the first place. Then he got stuck doing a cheese course. Despite getting a lot of positive comments from the judges, he gets sent home. “It feels horrible,” he says.

So Mei—who would be only the third woman to win, she points out—and Gregory march on to next week’s finale. In a season that sometimes felt a bit tired, having people like George and Doug come back really brightened things up. But in the end it’s almost as if they had never come back at all: the two most dominant contenders, who never got sent home in the first place, are left to battle it out for the title of Top Chef. 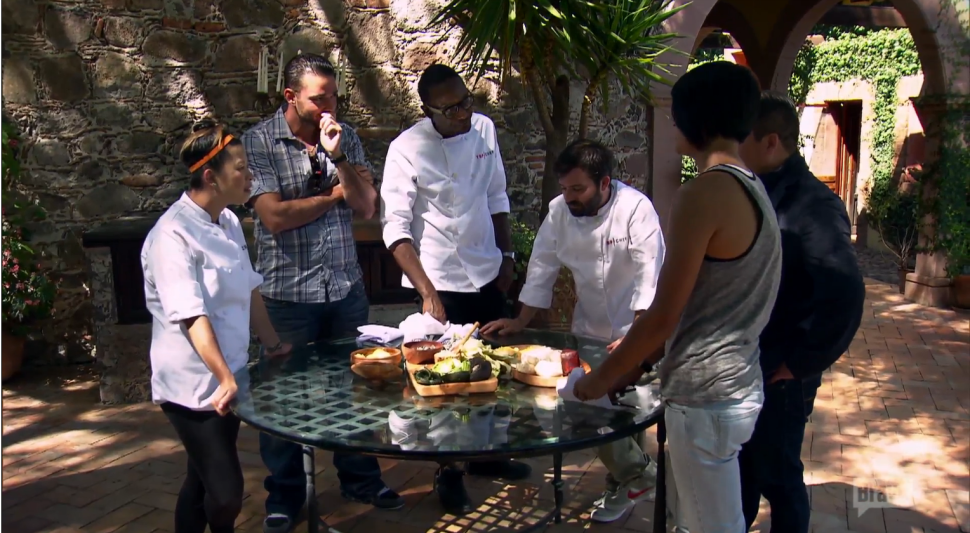