To the delight of the well-heeled crowd at the Association for a Better New York breakfast in January, Gov. Andrew Cuomo proclaimed that he would tackle at least one white whale of the city’s vast and frustrating transportation system.

The Democratic governor said he would finally build a train to LaGuardia Airport in Queens, linking the oft-mocked but crucial airport hub with the No. 7 train and Long Island Rail Road. The price? A mere $450 million.

“You can’t get to LaGuardia by train there and that really is inexcusable. And that we’re going to change over the next several years,” Mr. Cuomo said.

Mr. Cuomo’s announcement was welcomed in business, labor and transportation circles, but insiders immediately questioned how an AirTrain to LaGuardia could cost just $450 million to build. For transit advocates and close watchers of municipal government, the cost appeared to be absurdly low.

Thomas Prendergast, the chairman of the Metropolitan Transportation Authority, confirmed those suspicions at a budget hearing in Albany last week.

“The range of costs is actually probably from half a billion to $1 billion,” he said, according to Capital New York. He would walk back his comment later, claiming to reporters that there is a “range of estimates, and so when the governor said $450 million, then that’s what we’re working on doing.”

Mr. Cuomo said the money would be drawn from some combination of MTA, Port Authority and state funds. But to anyone who has closely monitored how money is spent on infrastructure in the New York area, the $450 million figure never passed the smell test.

Few details about the project are still known. Few even knew it was coming: high-ranking Long Island Rail Road employees, for example, were given no heads up when Mr. Cuomo announced on January 20 that a train link would be planned to connect the Willets Point LIRR stop, along with the 7-train, to the airport, sources say.

A Cuomo spokeswoman, Beth DeFalco, said the MTA provided the cost estimate of the 1.5-mile LaGuardia AirTrain, calculating a cost of $300 million per track mile. The MTA estimate was based in large part on the cost model of the AirTrain from Jamaica, Queens to John F. Kennedy International Airport, she said.

The AirTrain from Jamaica to JFK is eight miles long and cost $1.9 billion to build, though the project was built between 1998 and 2003. Inflation has driven up construction costs substantially.

Mr. Cuomo’s plan calls for the train to run along the Grand Central Parkway. The train line would compliment, or possibly interfere with, the planned redevelopment of the Willets Point neighborhood, an area of auto repair shops, scrapyards and limited infrastructure. Shopping malls and housing are expecting to be built on the land in the coming years.

Mr. Fernández said that the proposed AirTrain’s access points would invariably cut into private property and the government would have to pay for the land, a cost Mr. Cuomo did not seem factor in. In addition to Willets Point, the neighboring National Tennis Center is also undergoing extensive renovations.

Other experts wondered how much it would cost to create an easy transfer point between the LIRR and 7-train platforms.

“The question is how much will they integrate the AirTrain with existing services at Willets Point. There’s not much integration at all [between the 7-train and LIRR],” said Richard Barone, the director of transportation programs at the Regional Plan Association. “Is it going be dropped close to the Flushing line or parallel? Will it require you to walk outside to a train shed, onto a walkway? You have to put yourself in the mindset of a passenger.”

Transit advocates want to know what type of train car the project will use: a simple people mover, similar to cars that travel to Newark Liberty International Airport, or more expensive types of cars compatible with urban mass transit, like the cars operating on the line to JFK. The Newark Airport train cannot connect with a commuter rail network.

Ridership numbers may become an issue when–or if–the AirTrain to LaGuardia is completed. Travelers to the airport would still have to ride almost the entire length of the 7-train from Midtown Manhattan to Willets Point. Subways aren’t conducive to carrying large amounts of luggage and the outdoor line, as massive weather-related delays showed this week, is not always reliable.

“For business travelers, the 7-train is not ever going to be an attractive alternative. It’s very congested and it’s a 25 to 30 minute ride to get there. Add in an AirTrain transfer and you’re talking about 45 to 50 minutes,” Mr. Barone said. “That’s a lot longer than a 20 minute cab ride from Manhattan.” 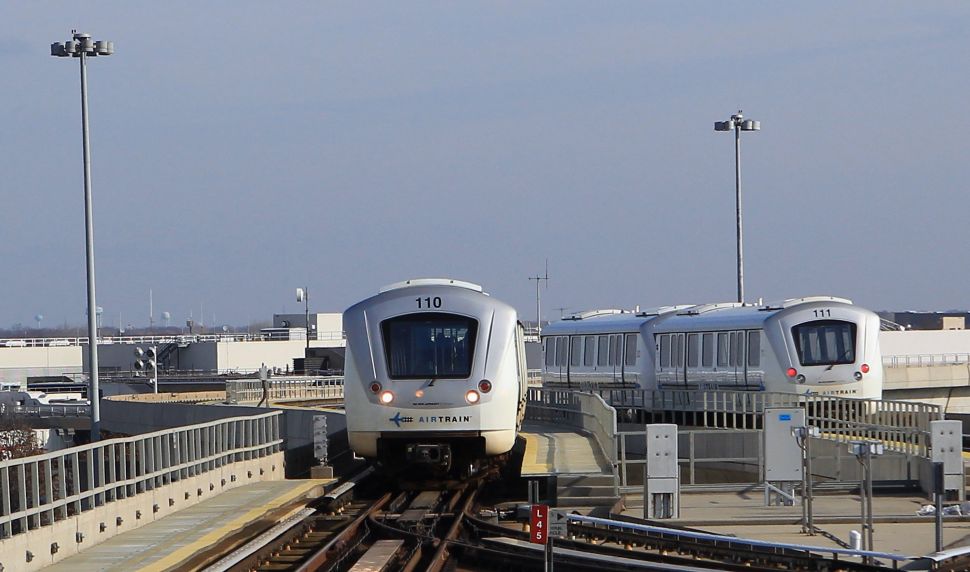