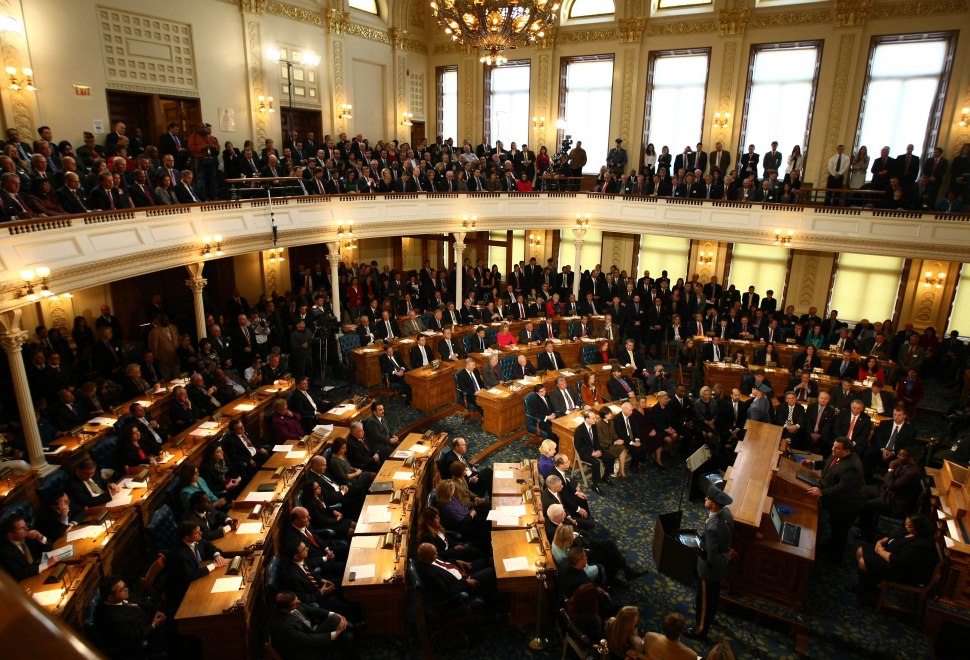 It’s also sent the statehouse into a surprise political crisis, pitting a Republican governor with blossoming presidential ambitions against a Democratic-controlled legislature already fuming for having been forced into the predicament they’re in now.

“The state is in a very critical situation right now,” Assemblyman Gary Schaer (D-36), chairman of the lower chamber’s budget committee, said of the ruling’s impact.

On Monday afternoon, Superior Court Judge Mary Jacobson sided with a handful of public labor unions in ordering Christie to reverse cuts he’d made to this year’s slated pension contribution, arguing the state has a “contractual obligation” to fund the system based on the 2011 pension reform legislation Christie signed with Senate President Steve Sweeney (D-3). Christie, a Republican incumbent and presidential hopeful in 2016, had cut the planned payment from the state’s budget for the current fiscal year, citing economic pressures.

The news has lawmakers — and likely Christie’s office — scrambling. Still dealing with an already gaping budget shortfall and a host of other economic and fiscal issues, the legislature must now come up with a way to make this year’s payment before the fiscal year ends on July 1. Republicans are likely to call for budget cuts, while Democrats find themselves mired in frustrations over Christie’s initial decision to put off the contributions.

“The Legislature sent Gov. Christie a balanced state budget that fully funded the state’s obligation, only to see the governor use his line item veto authority to break his promise. This ruling is the predictable and unfortunate result of the governor’s fiscally irresponsible decision,” read a joint statement yesterday by Democratic Assembly leaders Vincent Prieto (D-32), Lou Greenwald (D-6), and Schaer, who added they will “be reviewing this ruling as we decide how best to proceed.”

The issue is likely to be the driving point in Christie’s address this afternoon, when he’s scheduled to unveil his latest budget proposal on the Assembly floor. A much-anticipated report by a pensions and benefits study commission, convened by Christie last year to provide recommendations on new ways to fund the state’s pension obligations, is due out before the address, and is expected to recommend a merger of the state’s several public pension systems.

Christie’s own speech will likely consist in large part of talk about that proposal; sources say he’s expected to announce a new partnership with unions like the New Jersey Education Association, and call for a bi-partisan response to the issue.

It’s unclear, however, how lawmakers will receive his pitch. Democrats yesterday answered the news of Jacobson’s ruling with a flurry of statements and scathing condemnations of the Republican governor, criticizing him for making the initial cuts and forcing them into an 11th-hour “massive fiscal crisis“, as Sweeney put it. Others blasted the governor for risking the state’s fiscal welfare at a time when much of its economy is already teetering delicately.

Schaer, who also co-chair the legislature’s joint budget committee, said lawmakers will be hard-pressed to find funds to cover the pension payment not already allocated elsewhere in the budget. He estimated around $1.3 million still in state reserves from last year’s budget, revenue projections this year amounting to around $670 million — but that still comes up short in the face of the $1.6 payment the state will have to make immediately, as well as future ones going forward.

“We’re still a billion short,” he said. “How do you raise a billion dollars in such a short period of time?”

Democrats argue that their budget, passed in June of last year  — a $34.1 billion proposal that would make a full payment to the public-worker pension fund and increase taxes on businesses and millionaires to plug a major revenue shortfall — would have avoided the situation. But absent tax hikes of leftover revenues, lawmakers will have to find another route to come up with the payments.

What the ruling does likely making certain, observers say, is more budget cuts at a time when many state programs — in areas like education and transportation — are already suffering from lack of funding.

“Where are we going to cut? I have some ideas, I think we have to look at the entire budget and save five percent,” said Assembly Minority Leader Jon Bramnick (R-21). “You’re basically talking about saving five percent in the budget and moving it into pensions.”

Where to find those savings will be the big challenge. Schaer said there is “no question” the state has been living beyond its means, but laid most the blame at Christie’s feet, under whose leadership New Jersey has lagged economically behind most of the nation.

“I don’t know whether the New Jersey economy has made Christie or Christie has made the New Jersey economy, but several things remain fact: New Jersey is number 49 out of 50 when it comes to employment, versus what it was before the recession. We’ve not yet gotten out of the recession still. Right now, we are 47 out of 50 in terms of the per capita debt load of New Jersey residents. The statistics are disconcerting, and they have not yet improved — indeed, we can only say they have worsened under governor Christie,” Schaer said.

Making matters worse for some lawmakers is the timing of the crisis: members of the Assembly are up for re-election in November, and neither massive cuts — nor big tax hikes, the preferable route for Democrats — are going to look good in front of voters.

“It’s crushing to them,” a source said. “They’re going to have to make some real, real hard decisions.”

Indeed, to the extent that this is a political win for anyone, one source told PolitickerNJ that the ruling — widely thought by observers to be a major setback for the Republican in his quest to reform the state’s pension system ahead of 2016’s presidential primaries– could be a blessing in disguise for Christie.

“Christie now has some leverage to say, hey, I didn’t make this decision, it’s a horrible one by the court, but Democrats, you’re going to figure out how to pay for it,” the source said.

The crisis, in any case, will pose a real challenge to Christie and lawmakers alike, as both will be forced to make real compromises on an issue sensitive to either party. The kind “kabuki theater” that characterized budgetary deliberations in seasons past will likely not suffice this time around, when real decisions will need to be made, one source said.

“The difference this year with previous years is the Democrats in years past who play this kabuki theater with the governor, when they set tax increases on top of tax increases and fully funded the school funding, and the governor would veto it in ceremonious fashion and then proclaim he’s protecting the tax payers by not increasing taxes, and everybody won,” the source said. “The Democrats got what they wanted politically, the governor got what he wanted politically, and nobody got hurt, there was no money exchanging hands.

“The problem here is they have to come up with $1.5 billion dollars, and they have to figure out where to get that from. And that’s real. I don’t think revenues have grown so much in the past few years that they’re going to find that somewhere under a couch cushion,” the source added.

Christie’s budget address today, as Schaer points out, will likely help illuminate how the issue gets tackled in the weeks ahead. Democrats have scheduled a press conference in the statehouse to respond to Christie following his address, and is sure to look similar to the one held after Christie’s state of the state address earlier this year: heavily critical.

“The timing is wonderful, if only because the governor is giving his budget address tomorrow,” Schaer said, referring to the ruling. “So the people of this great state will have the opportunity to learn from him how he will overcome these difficulties, as well as the difficulties in overcoming the Transportation Trust Fund, education, higher education — the list, unfortunately, is longer than we’d like.”