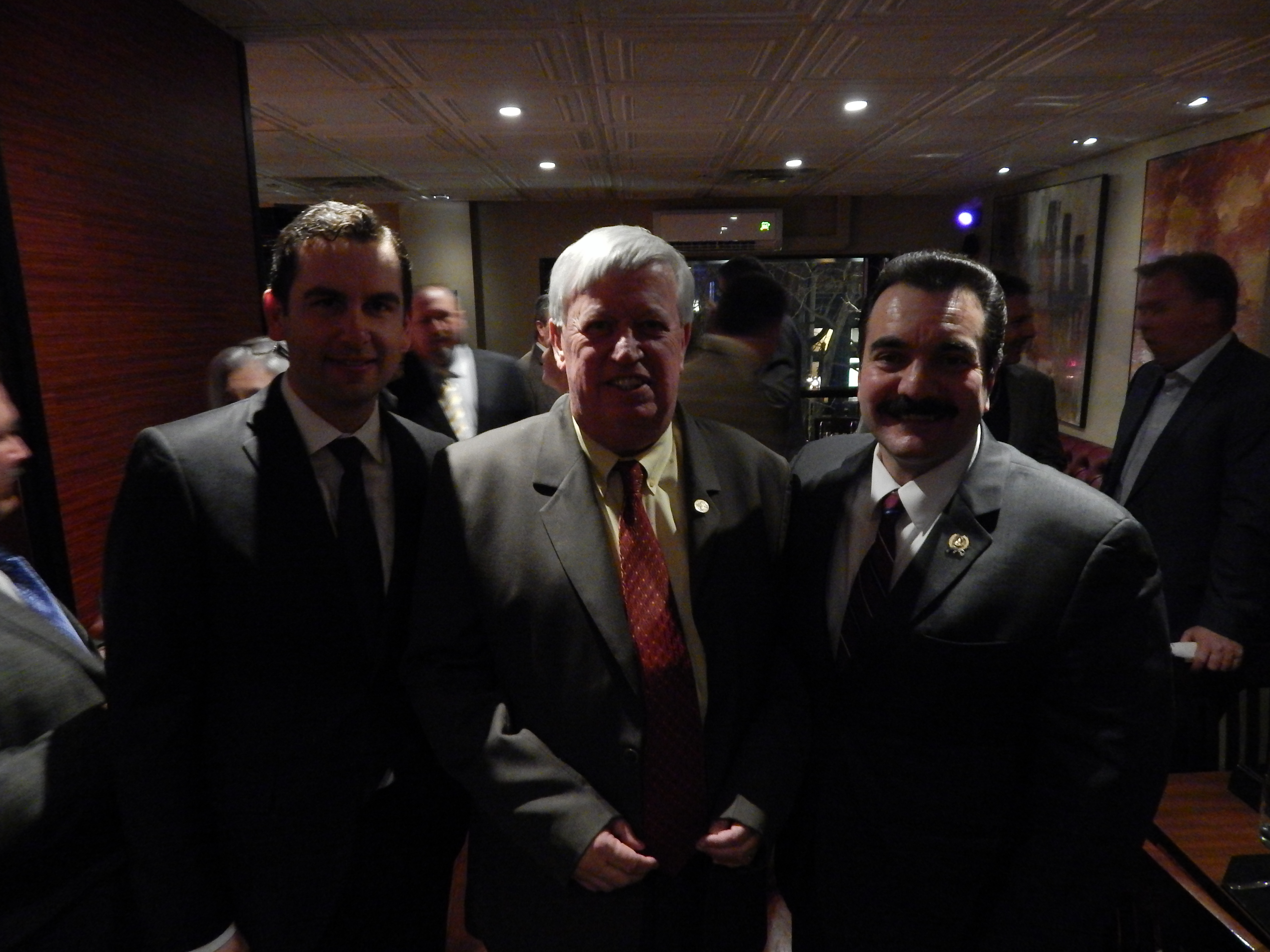 JERSEY CITY — Hudson County Executive Tom DeGise stood at one end, grinning giddily as he cast a sideways gaze over a jam-packed crowd nursing drinks at the bar. On the other end was Hudson County Freeholder Bill O’Dea, clutching a glass of nondescript liquid and going on about the novel or script or TV pilot he’s working on.

And somewhere in between was Jersey City Mayor Steve Fulop, touting his latest jobs report — “it shows the kind of work we’re doing,” he said — while making the rounds.

For Hudson County politics, this is peace — or some variation of it.

“It’s the right thing to do,” the 64-year-old DeGise told PolitickerNJ over the cackle of Wednesday night politicking. “The Hudson County Democratic Party is in a better place now than it’s been in a long, long time. Everything is lined up right. And for Billy and for Steven, it would’ve been a tough thing to try and fracture the county at this point.”

As DeGise strides unchallenged toward re-election this year, his event in the upper level of Liberty Steakhouse off Montgomery Street here tonight was a snapshot of the almost alien state of affairs Hudson County politicos currently find themselves inhabiting. No warring factions. No political infighting. No out-sized egos moving to knocks the heads off their fellow Democrats.

This year, for the first time in many years, it’s about the future, party leaders say. Following news that O’Dea, a longtime nemesis of DeGise and the county’s Democratic Organization, would not be mounting his own campaign for the post, the party has fallen fully in line behind DeGise, happy to avoid the kind of painful fracturing that has often characterized elections in Hudson.

That includes Hudson’s rival powers brokers, North Bergen Mayor Nick Sacco and Union City Mayor Brian Stack. Both Sacco and Stack came together this year to endorse DeGise, appearing at a DeGise-hosted event together in Washington County Park earlier this year to give their blessing.

“I don’t think anyone wants to blow this up,” DeGise said. “I mean if Brian Stack, and Nick Sacco, and Tom DeGise could pose together for a picture, any other petty differences between other people should be done away with. If they could do that — then everybody else should do it too.”

It could have been a repeat of 2007, when Stack waged all-out civil war with county Democrats. Thankfully, DeGise said, it won’t be.

“The thing about Hudson County fights, you almost always know who’s going to win before hand. It makes it like an exercise in futility,” DeGise said, calling ’07 the “last great war” in Hudson County. “You could’ve predicted the results a week before the election, and instead we spent millions of dollars, we ended the careers of some really good guys, had hard feelings that some people are still holding since that time. That could’ve been the road we went down again.”

Instead, “united” seem to be the operative word in political discussions about this year’s county executive’s race. That was clear at DeGise’s gathering, which his Deputy Chief of Staff Craig Guy said had initially begun as a “small labor gathering” but turned out to be a colorful crowd of players from all corners of the party. County freeholders were there, including Anthony “Stick” Romano; Jersey City Assemblyman Raj Mukherji (D-33) was present; DeGise’s mayoral support, including Bayonne Mayor Jimmy Davis, made an appearance; and labor came out strong, featuring representatives from the New Jersey Education Association to AFL-CIO head Charles Wowkanech to Plumbers Local 24, who announced their endorsement of DeGise last week.

Assembly Speaker Vinnie Prieto (D-32) was there, too, basking in the political harmony that he helped orchestrate.

“The proof is in the pudding — here it is,” Prieto beamed. “It’s a great pleasure to have unity, this is what I’ve been preaching as an ultimate goal, as a consensus builder. Tommy’s done a great job, he came in on difficult times over a decade ago, and he has proven he can work with everybody, and listen I think Hudson County is going to be solidly united.”

But it was Fulop who made the picture whole. Insiders say an O’Dea challenge would’ve put the upwardly-mobile mayor — who had committed himself to O’Dea, should he have run – in a precarious situation, pinning him between a longtime ally and the county organization, which he’s also worked to keep close as he mulls a gubernatorial run. With O’Dea out and the county behind DeGise, Fulop was able to avoid that conflict — but also take part in helping solidify the party ahead of 2017.

“Listen, Billy was probably the first and only public official to support me early. So I was being respectful, as long as Bill was out there I was going to be out there,” Fulop said. “But it’s great for Hudson County that everybody is together now and Tom and Bill are turning the page toward a more productive relationship.”

O’Dea, for his part, offered little more than a shrug when asked what ultimately made him decide against a run — and what he’ll do next.

“In this world I get to mull a lot of good things over,” he said, clad in red sweater at the bar. “I wrote a book, I’ve written some scripts, I’ve got a producer in New York. I’ve got a little adopted grandson. It’s nice to have a lot of options in life.”

In the end, those present tonight said the party’s new-found solidarity puts Hudson County — as a political force to be reckoned with — back in the spotlight.

“Now we’re positioned very well for statewide tussles, and that’s what it should be,” DeGise said. “Vinnie Prieto has done a wonderful job bringing people together. Between him and mayor Sacco, they’ve gotten us back into the statewide conversation.”

Statewide conversation — as in governor’s race? 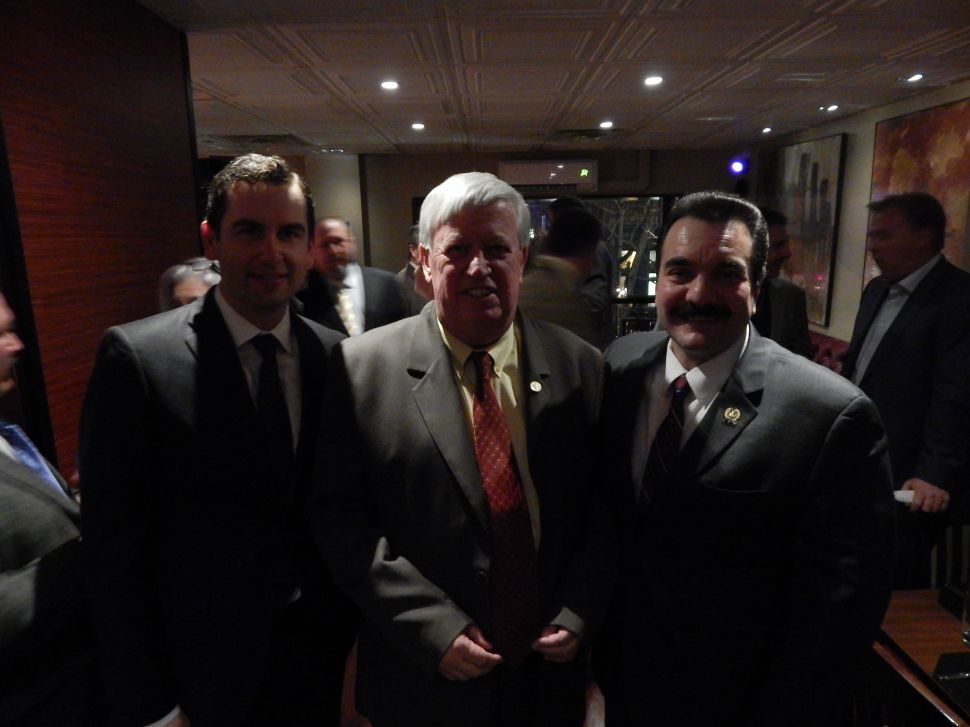