If you’re feeling an extra sense of comfort about the maintenance of world order, there’s good reason: the United Nations Security Council held an emergency session this week to discuss the flare-up between Israel and the Iranian-backed terror organization that controls southern Lebanon, Hezbollah.

Nearly two weeks ago, some enterprising military helicopters allegedly belonging to Israel attacked a convoy in Quneitra—a province on the Syrian side of the Golan Heights. In addition to the Iranian general killed in the attack (perhaps he was on his way to the P5+1 talks in Geneva?), Hezbollah commander Jihad Mughniyeh—son of the late and unlamented arch-terrorist Imad Mughniyeh—also met his end. Hezbollah vowed to respond and, Wednesday morning, they did. Seven Israeli soldiers came under cross-border anti-tank fire. Two were killed. Israel responded with artillery fire on Hezbollah targets in southern Lebanon. A Spanish UN peacekeeper was killed in the Israeli response.

While the Security Council debated into the night, they did agree to condemn the killing of the Spanish peacekeeper. The Spanish ambassador to the UN blamed Israel for escalating the situation and for the death of the soldier. It would have been more fair to blame the UN for sending peacekeepers there in the first place, keeping them from being taken seriously by either side in the conflict, and allowing Hezbollah to effectively use them as human shields. Since that was too complicated, the Spanish ambassador did what Europeans do: he blamed the Jews.

The United Nations Interim Forces in Lebanon (UNIFIL) was established by the Security Council in 1978 to deal with the nascent Lebanese civil war. Only at the United Nations can the word “interim” be used on a project that’s been going on since season five of the TV program Good Times.

Among the mandates imposed on UNIFIL by a 2006 cease-fire resolution that ended the second Israeli-Lebanon war are the following missions: impossible:

Monitor the cessation of hostilities.

Assist the Lebanese armed forces in clearing the area between the Israeli border and the Litani River of “any armed personnel, assets, and weapons.”

Suffice to say that UNIFIL forces don’t do any of those things. Hezbollah installations are dug in across the border from Israel directly in front of UNIFIL installations; proudly flying the yellow Hezbollah flag and daring Israel to shoot at them and risk hitting the UN troops. Hezbollah openly brings shipments of arms into southern Lebanon; it was just such a convoy that Israel struck in Quneitra two week ago.

To be fair, why on earth would a Spanish soldier in a powder blue helmet want to stick his neck out in southern Lebanon? The armed personnel they’re mandated to try to clear and/or prevent from rearming are very serious people with the means and motivation to make life south of the Litani (and north of it, if we’re being honest) very uncomfortable. And, unlike the UN, Hezbollah’s rules of engagement amount to answering the rigorous inquiry “do we feel like killing you today?”

As farcical as the whole situation is, it’s really not funny. Hezbollah, financed by nuclear weapons-pursuing Iran, is a terror organization with a demonstrated global reach. They possess tens of thousands of mortars and rockets of varying range and payload. They began as a group dedicated to throwing Israel out of southern Lebanon. After Israel unilaterally withdrew from southern Lebanon in 2000, they moved the goalposts to include destroying Israel and killing Jews.

Having a peacekeeping force on the ground that does nothing to actually keep the peace makes those poor, brave soldiers sitting ducks in someone else’s war and undermines the credibility of the United Nations (a precious commodity to begin with). How is any combatant party in the world supposed to take seriously the guarantee that they can safely lay down their weapons due to the insertion of a UN peacekeeping force when the glaring example of southern Lebanon tells them otherwise?

The UN should stop providing cover for Hezbollah rearmament. They should stop putting international peacekeepers in harm’s way if they don’t intend to let them actually keep the peace. And they should stop condemning democratic countries for things that are rightly blamed on terror organizations.

Jonathan Greenberg is a Middle East analyst, public policy expert, and former staffer at the American Israel Public Affairs Committee. He is a senior fellow with the Salomon Center. 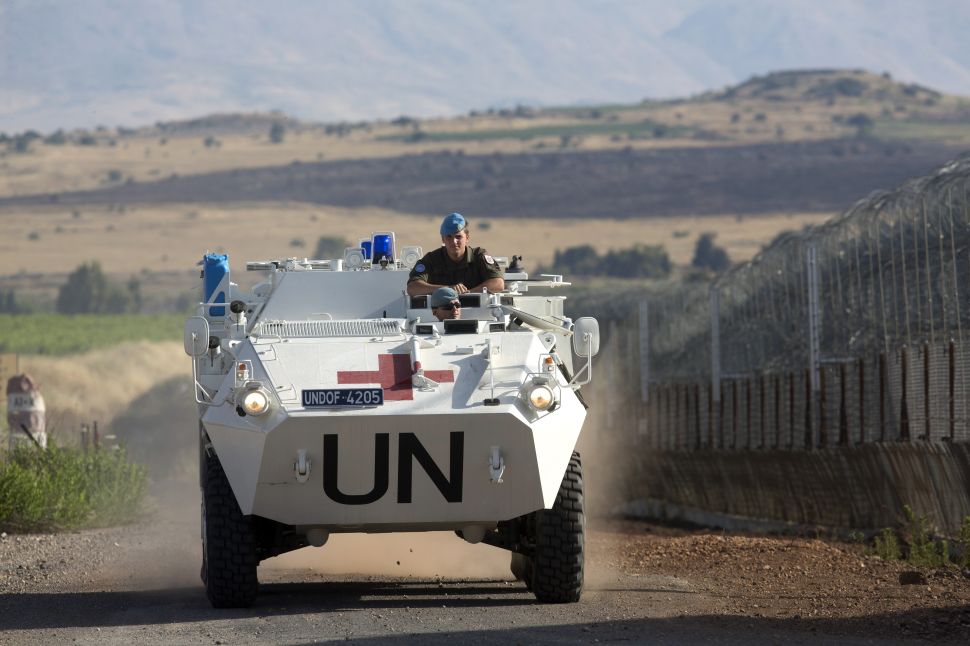