It’s been a while since we’ve had a bomb-throwing anonymous insider turning the unchecked vanity of this global art circus into vicious, hilarious commentary. There was the very unofficial Twitter account that parodied Louise Blouin Media founder Louise Blouin in a way that was both totally outrageous and alarmingly precise. There’s I Call B, an Instagram that “calls bullshit” on blog posts by art critics it deems self-congratulatory (often by Jerry Saltz, occasionally by me), market-favorite punching bags like Richard Phillips, Jeff Koons, and Richard Prince, and the yacht-happy billionaire collectors who go from Zurich to Basel to Hydra.

And now we have another, this one perhaps more rude and on point than any others. About a week ago, someone—who, we don’t exactly know—posted to the @freeze_de Instagram account a picture of Arnold Schwarzenegger as the villain in Batman & Robin, Mr. Freeze. (The name is a play on frieze d/e, the bilingual German/English edition of the art journal.)

It didn’t take long for the person behind the account to adopt a scorched earth policy in its takedown of key art world tropes: conceptual abstract painters showing at Bushwick outposts of Belgian galleries, pedestrian rabble-rousing headlines churned out by art blog sweatshops, people who ask “how the show was” only to hear about “how nice the space is,” Urs Fischer—et cetera. An early post manages to take Artforum, Petra Cortright and Ryder Ripps to task in a few words.  The Still House Group is sent up with a picture of a young college student in a UNH sweatshirt with meme-writing spelling out the words “THINKING ABOUT PLEDGING STILL HOUSE.” Another contends that to be a successful advisor all one needs is the right pair of Nikes and an ArtRank™ subscription. A woman is crying because, though Roberta Smith did review her show, “Paridust did not Insta.”

I started hearing chatter about freeze d/e during after-parties for Sunday openings this week, as gallery directors had begun to circulate the jokes among colleagues who also work at spaces on the Lower East Side. Sure, some of the references are pretty oblique, but it manages to hit the zeitgeist at the time when a events can take place on a block here in Chinatown but resonate in Berlin simultaneously.

And, intriguingly, the question remains—who is the mastermind behind freeze d/e? It must be someone pretty intimately involved in the whole sausage-making, as the feed is dense with multilayered jokes compiled in a way that would come natural to someone actually present at certain installs. It could be a dealer, an advisor, an art startup kid, an editor, a publicist, a gallery assistant, or an artist—actually, the images themselves are constructed in a way to suggest it could be a net artist, or at least some sort of an artist dabbling in the medium.

Then, who? Plenty of artists have left comments on certain posts. Jon Rafman left the comment “First” on the first post, and Jamian Juliano Villani has big-upped freeze d/e posts before her thousands of followers. (Mr. Rafman denied that it was him while admitting it’s “hilarious,” and Ms. Villani did not respond to an email.)

But then I noticed that the artist Kadar Brock—who himself is a quite visible and celebrated element of the world investigated thoroughly by freeze d/e—posted a picture of Mr. Schwarzenegger as Mr. Freeze on his Instagram over a month ago, and then posted it again this week. It was the same picture used by freeze d/e.

But, alas, he denied any involvement.

“My meme is strong but not that strong,” Mr. Brock said. “We’re just both Mr. Freeze fanatics.”

And, also, just to clarify: it’s really not me. 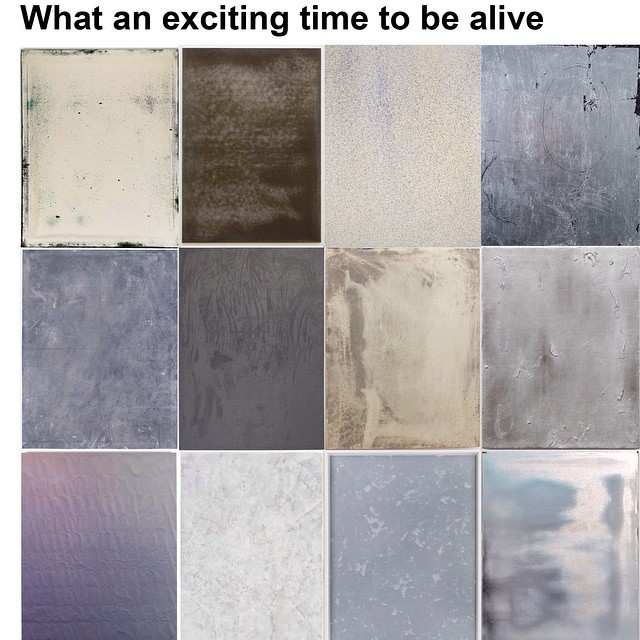