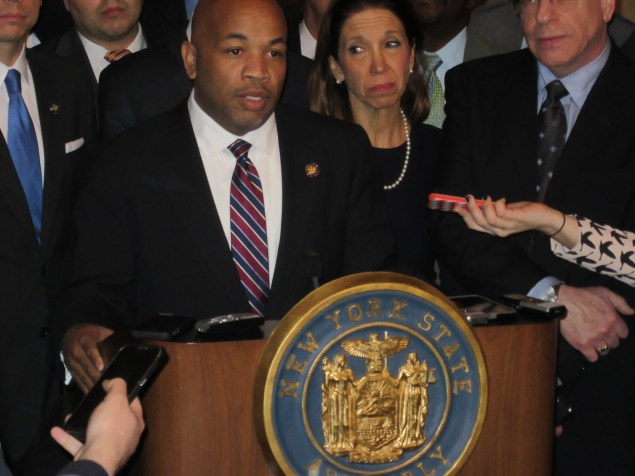 At the first press conference following his historic election as speaker of the State Assembly, Carl Heastie took three just questions from reporters.

“That’s insulting, that’s ridiculous,” one Albany-based journalist shouted as Mr. Heastie,
a somnolent legislator for most of his 14 years in the Assembly, sidled away.

“So much for openness and transparency,” another groaned.

After more kveching, Mr. Heastie returned, flashing a wry smile at indignant reporters. “I hear you want some more,” he said. He then held a standard-length press conference, assuaging the grumbling.

Mr. Heastie, 47, is the once-anonymous Democrat tapped by his colleagues to lead the
scandal-plagued lower house of the state legislature after the meteoric downfall of former Speaker Sheldon Silver. Last month, federal prosecutors arrested Mr. Silver—who dominated the chamber from 1994 until his recent resignation—on federal corruption charges.

A taciturn Bronx legislator with a modest record of accomplishments, Mr. Heastie has promised a bevy of reforms: Increasing the financial disclosure requirements and capping the outside incomes of lawmakers, altering the way oft-abused travel reimbursements are handed out and establishing a new office of ethics and compliance.

“There’s no question that the actions of a few have led to cynicism,” Mr. Heastie acknowledged later in the Assembly chambers. “Our state deserves a government as good as its people.”

How much Mr. Heastie, an accountant by trade, will be a departure from Mr. Silver, a master negotiator who ran the Assembly like a dictatorship, is not yet apparent. Mr. Heastie kept in place almost all of the committee chairpersons that Mr. Silver had appointed and told the Assembly’s central staff—the number-crunchers with the institutional memory to keep the machine running—that their jobs were safe. A greater question, for the sake of people beyond the state capital, is whether Mr. Heastie can go toe-to-toe with Gov. Andrew Cuomo to represent New York City’s interests.

“Cuomo … has the Assembly by the tail,” said a former assembly staffer who requested anonymity. “Shelly just went down. Cuomo knows that he doesn’t have to negotiate with Shelly anymore. He probably feels he can get what he wants out of Heastie.”

For all his faults, Mr. Silver long safeguarded progressive and urban priorities—and therefore served as Mayor Bill de Blasio’s best ally in Albany. Mr. Heastie is a tabula rasa, known in his Bronx district but nowhere else, offering few words on the record and mostly ducking controversy—the exception being a failure to account for about $25,000 in campaign spending from 2008 to 2013, which, while not illegal, attracted scrutiny from the Moreland Commission investigation before it closed last year (though there’s no evidence state or federal prosecutors are investigating Mr. Heastie).

Since his election last Tuesday, Mr. Heastie has been making the rounds. He put in an appearance at Rev. Al Sharpton’s National Action Network rally on Saturday, reportedly speaking for only three minutes, and met with Mr. de Blasio the next day in Brooklyn to discuss strengthening the city’s rent laws.

Allies of Mr. Heastie point to his understated but formidable behind-the-scenes politicking
as proof he is ready for prime time. He ably managed a once-balkanized Bronx as chairman of the borough’s Democratic Party, building consensus in an area notorious for its political turf wars. Trained as a statistician, he is regarded as one of the rare politicians not hardened by ideology.

“He’s too farsighted to be vindictive,” said Bronx Councilman Ritchie Torres, describing Mr. Heastie as a “true statesman.” “He keeps his eye on the end game, which is unifying the delegation that he leads.”

One trait Mr. Silver and Mr. Heastie—the first African-American speaker of the Assembly—share is an inability to loudly promote themselves or their agendas. Mr. Silver, the walking stereotype of an opaque bureaucratic insider, betrayed little in public and was barely audible in reporters’ microphones. Mr. Heastie obviously thought a momentous press conference merited no more than three questions.

“Carl has never been a public speaker,” said former Assemblyman Richard Brodsky, a
Democrat who otherwise had kind words for Mr. Heastie. “The Assembly desperately needs a public spokesman.”

Like Mr. Silver, Mr. Heastie is a liberal but he is not as close to the city and state teachers’ unions as his predecessor. While Mr. Heastie opposed co-locating some charter schools in public schools, he supported the Bronx Charter School for Better Learning in his district, voted against renewing mayoral control of public schools and co-sponsored a bill—furiously opposed by the teachers’ unions—that would give tax credits to individuals who donate to private school scholarship funds.

Even his answer to an Observer question about whether he would back Mr. de Blasio’s call for a $13 municipal minimum wage was cagey. “We understand the income inequality issue in the City of New York and that’s a great discussion we’re gonna have with the rest of the conference,” he said.

But behind his shell, Mr. Heastie, his friends insist, is a more gregarious and easy-to-read elected official.

“When he’s off camera, Carl is funny and audacious,” Mr. Brodsky said. “When Shelly
was off camera, he was still the same guy.” 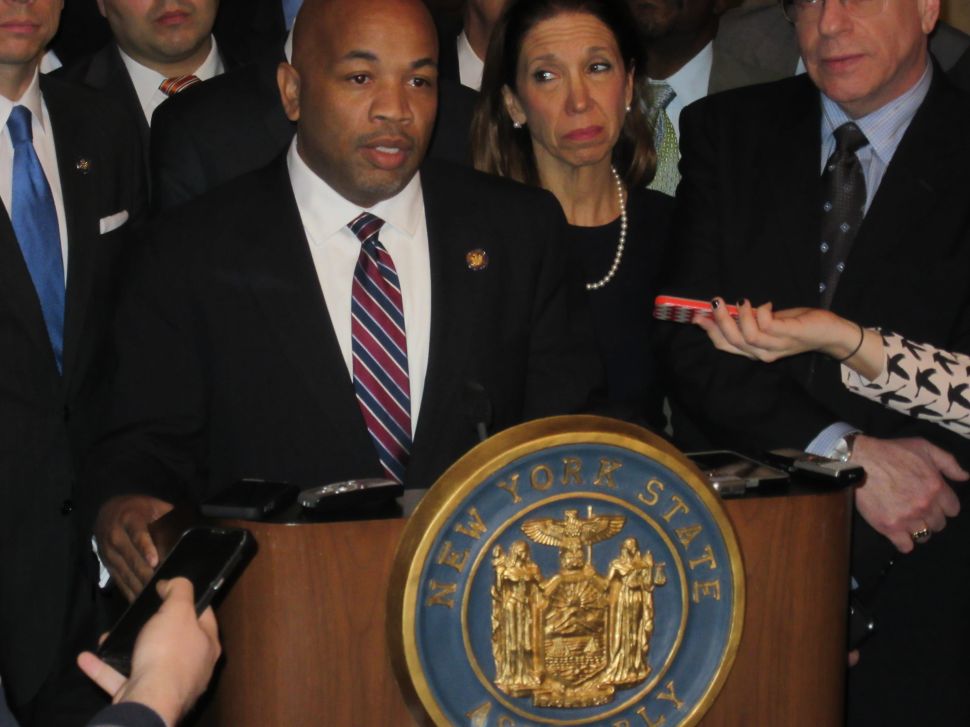