A construction worker suffered minor injuries in Midtown when part of a wall collapsed at a vacant building where TF Cornerstone will erect a luxury apartment building, according to officials.

FDNY Deputy Assistant Chief Dan Donoghue said at a press conference this afternoon that at 2:30 p.m., the New York City Fire Department received a call about a collapsed building on West 57th Street. When the fire fighters arrived at 642 West 57th Street between 11th and 12th Avenues, they saw the building had “collapsed inwards,” the chief said.

Department of Buildings Commissioner Rick Chandler said TF Cornerstone had been issued a full demolition permit for the site but the department would review the submitted paperwork in light of the collapse. The construction workers were doing mechanical interior demolition work at the existing five-story building when the collapse started on the third floor, Mr. Chandler said at the press conference. There are no open DOB complaints at the site, according to a spokesman for the DOB, and the last complaint at the site was in 2006 for insufficient power in the garage.

The site has been hit with an Environmental Control Board violation, which is issued by the DOB, for failure to carry out demo operations in a safe manner, the DOB spokesman said.

“Earlier today there was an incident during demolition at our site on West 57th Street,” according to a statement from TF Cornerstone. “Site safety is always our first priority as it relates to construction, and we are cooperating fully with all relevant authorities to try to determine what caused this occurrence. The work underway at the site was being carried out by a subcontractor with a third party engineer employed by the construction company to oversee the demolition process.”

According to the DOB, Brooklyn-based Breeze Demolition was contracted to demolish the site. A woman who answered the phone at Breeze said the company declined to comment.

There were 16 construction workers inside and one suffered minor injuries and was taken to St. Luke’s Hospital, Mr. Donoghue said. There is no indication that anyone else was injured even with a school bus out front.

The building, Mr. Donoghue said, “has not been occupied for some time.”

TF Cornerstone did not immediately respond with a comment by publication time.

Meanwhile, yesterday a construction worker at the Barclays Center was killed when falling steel beams crushed him, as was widely reported.

Update: This story was edited to include information provided by a spokesman for the Department of Buildings, a comment from TF Cornerstone and information about the contractor. 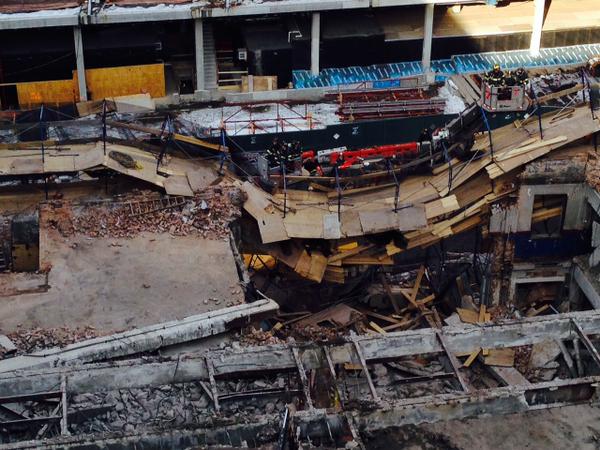