I don’t think anyone is arguing that ABC’s Fresh off the Boat is “important,” as the first Asian family-starring sitcom since Margaret Cho’s All American Girl in 1995. And I have to mention that. Every review has to mention that. Because Fresh Off the Boat is in fact important, if for no other reason than it breaks a piece off the gigantic white wall that is popular television. The show revolves around the Huang family — grandmother Huang, parents Louis and Jessica and their three sons Eddie, Emery and Evan — A Taiwanese family moving from Washington DC’s Chinatown to Orlando, Florida.

But you can’t just judge a show on how much it changes the status quo. A heavily-publicized weekly show that was just dead air for half an hour would change the status quo, but that doesn’t mean people would watch it. That wouldn’t mean it would be a good show. So is Fresh Off the Boat a genuinely entertaining, funny sitcom?

Well, to start off, at the very least I think I like this show better than Eddie Huang. Unfortunately, the entire premise of Fresh Off The Boat isn’t based on my personal memoir. It’s no secret that Mr. Huang has some…reservations?…about how ABC handled the adaptation of his book. Months before the show premiered, he notoriously penned an essay for Vulture, in which he wrote, “The network tried to turn my memoir into a cornstarch sitcom and me into a mascot for America. I hated that.” Now, I’m reviewing the show not the person, albeit I find Mr. Huang’s decision to bring his show to Disney-owned ABC if he wanted a grittier look at race relations in white suburbia, and Mr. Huang’s narration over every episode has a bitter, dark tinge on it knowing his personal thoughts.

But that’s the funny thing about Fresh Off The Boat. It feels like two completely different TV shows — the one that ABC wanted to make and the one Mr. Huang envisioned. You can almost tell every scene which was a “win” for Mr. Huang, a moment that he absolutely refused to omit or down. Take for example a cafeteria scene, probably the best scene in a straight “whoa” sense out of the premiere’s two half-hour episodes. Young Eddie gets in a fight with Walter, a black classmate. “Get used to it,” Walter says. “You’re at the bottom now. It’s my turn, chink.”

I can’t imagine how hard it was to get the word “chink” into an ABC script. But the strength of the scene is on young Eddie’s reaction. He’s angry. You can see it on his face. But he’s also confused. He knows the word was used in anger, obviously a slur against his race. But until that moment, racial slurs weren’t even a part of Eddie’s life. He knew in this this new environment, he was different. At that moment, he realizes just how different.

The entire scene feels on loan from a different universe where Fresh off the Boat is on every Wednesday at 10…on HBO, a channel where I feel Mr. Huang would have zero reservations.

Because sometimes the tone of the show veers head-long into ABC-ification. Of course the Huang’s new white neighbors are going to be insensitive, it’s a given because of the story, but man are they cartoon-ishly insensitive. Occasionally the broad strokes are painted so broad, it comes back around to a satire of a satire. “She’s cutting equal parts because of Communism,” a neighbor says of Jessica’s cake dividing. Rest assured, on more than one occasion someone speaks slowly Just. Like. This, assuming a member of the Huang family can’t speak English.

But in the end, Fresh Off the Boat is an ABC family sitcom, and as far as that goes it is funny. It’s actually funnier than most sitcoms  on ABC. Constance Wu as the Huang family matriarch is the far-and-away highlight, and Randall Park as the puppy-like father is close behind. In fact, surprisingly, this show is both funnier and more moving when it centers less on race and more on family dynamics (a reason I enjoyed the second episode much more than the first, an episode about Jessica home-schooling her children and Eddie bonding with his father.)

In some strange way that mostly no one will agree with, I think middle child Emery is the most interesting character on this show. There’s a running joke that while his family is baffled by Orlando, and Eddie struggles dally to fit in, Emery is just sort of…fine. He makes at on of friends his first day of school. Neighborhood kids wave hello to him on the walk to the bus stop. His brand new girlfriend brings him a soda. “Why aren’t chicks bringing me soda?” Eddie asks.

“You want it too much,” Emery responds.

Yes, there’s a lot to be said for the fact that as one of the youngest Huang’s Emery is one of the Huang’s more fully assimilated into America. But there’s also something to be said for Emery not “wanting it too much.” He isn’t as hung up on race as every other character on this show, and in return no one is hung up on his race. And maybe that’s what has adult Eddie Huang so angry. His story was never about craving acceptance, as the characters of Fresh Off The Boat so often do. It was about craving the chance to be himself. 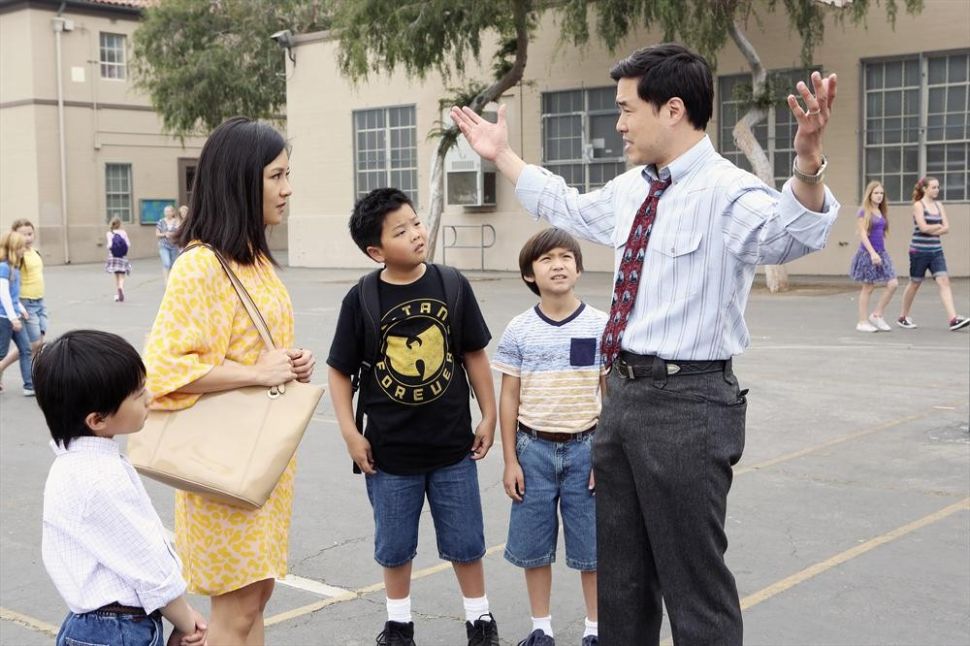 Filed Under: TV, TV, recap, Fresh Off the Boat