Las Vegas has no shortage of high end events and wild parties, but it’s not seen, primarily at least, as mecca for the art world. Now, a new installation at the Cosmopolitan Hotel in Vegas is bringing one of the art world’s biggest stars to the Strip. The hotel, in partnership with the Art Production Fund, plans to feature Yoko Ono’s international IMAGINE PEACE project projected on a series of large-scale digital displays in its recently installed “enhanced digital lobby experience.”

Ms. Ono’s IMAGINE PEACE is an ongoing installation project that uses the Internet, posters, and various forms of media to promote messages of peace in public spaces. The project is an extension of her IMAGINE PEACE TOWER in Reykjavik, Iceland, an outdoor sculpture dedicated to John Lennon in 2007.

New York’s Museum of Modern Art opens a retrospective of Ms. Ono’s work this May 17; she is considered a pioneer Conceptual artist affiliated with the Fluxus movement. (She met Mr. Lennon at a London gallery show of her work in 1966.)

At the Cosmopolitan, which has had a vibrant Contemporary art program since it opened in 2010, “Imagine peace” will be written in 24 languages and will flash across screens mounted on the columns of the hotel lobby while an instrumental version of Lennon’s “Imagine” plays softly in the background. The phrase will also blaze across the hotel’s 65-foot-high Strip-side marquee outside, adjacent to the Bellagio.

Concurrently, Ms. Ono’s interactive sculpture Wish Tree will also be shown, offering guests a chance to write wishes on paper and hang them on a live tree housed inside the hotel’s spa. 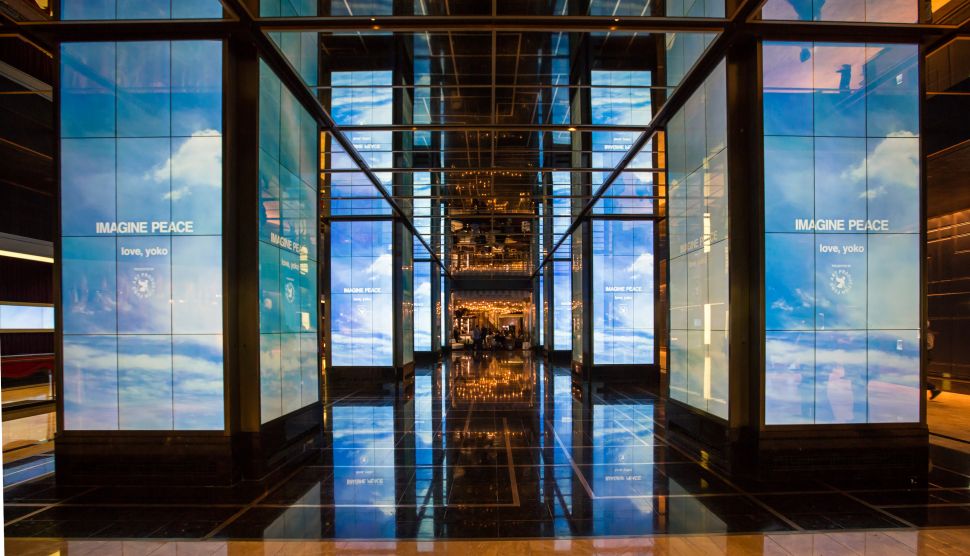