There are many benefits to being single in your early 20s: never having to compromise on which Chinese place to take out from, enjoying a bed all to yourself and indulging in romantic comedies without any mocking commentary. I have selfishly taken advantage of all of these single-girl perks, enjoying my freedom and relishing the opportunity to do those weird things you would never do in front of a significant other.

Of course there are also many disadvantages to the single life: It would be nice to have someone to replace a light bulb or make you coffee on a particularly rushed morning. But I recently learned there is another drawback: The House of Cards hardship in which an uncoupled viewer must watch 13 hours of political maneuvering, sexual affairs and violent deaths all by herself.

Like any truly dedicated fan, I had marked February 27th on my calendar months ago, ensuring that nothing would infringe on what I planned to be hours on end with the Underwoods. I knew many of my close friends had done the same, so as the day approached, we started to discuss viewing the show together. Where we would watch, what snacks we would have, what the rules of discussion would be — I wanted nothing short of a full game plan and, as many of my fellow fans are well-versed in politics, I thought they would be the perfect addition to my binge.

However, something soon thwarted my grand plans: the significant other. I quickly learned that House of Cards is apparently a couple’s activity, akin to weekends at B&Bs and moonlit walks on the beach. It was with both sympathy, and perhaps a little bit of pity, that each inquiry to watch was responded to with a “sorry, but I promised (insert boyfriend/girlfriend name here).”

(Warning: Light spoilers for season 3 ahead!)

At first I was bewildered. What is so erotic and appealing about political manipulation and the highly technical world of wheeling and dealing? Even more so, what was so sexy about the completely dysfunctional couple taking part in the power plays — a couple whose love may “be more than a shark’s love for blood” but whose life lacks almost all compassion and physical affection? To me, it seemed Claire and Frank symbolize everything I wouldn’t want in a relationship: a business partnership mandating all of the compromise with little passion, or at least little passion for each other. She would help him with the presidency, he would provide her an ambassadorship, and there would be no romance — not even a shared bed — as part of the deal.

For days I questioned why my friends didn’t choose more dreamy pastimes — maybe revel in the picturesque snow on a long winter walk or enjoy a good old-fashioned dinner date with candles and some Frank Sinatra in the background. Even if this was an activity they wanted to do together, what is so special about House of Cards that I couldn’t third wheel as usual? Sure, there were some great sex scenes, but everyone knows those have gone downhill since the Zoe and Rachel days. Almost any hot moment can easily be balanced out by the intimate awkwardness of the Underwoods. By the current season, when the couple does show signs of physical affection, it’s often cringe-worthy — the somnophiliatic sex scene in the third season, the first sex scene of this season, providing a particularly apt example.

After much consideration, I decided it is exactly this dysfunction that explains why House of Cards is the new kissing in the rain. The sexual tension and lack of much emotion, apart from ferocious ambition and the sharing of a nightly cigarette, provides a perfect juxtaposition to what most — though not all — couples want: a relationship fueled by love, care and, yes, a great sex life.

Of course, there are great aspects to the Underwood’s relationship, including their mutual respect and unwavering, if brutal, honesty. But as the seasons progress, the marriage is increasingly strained, with each spouse focused on how to get ahead or use each other’s power: How can Frank use his commander in chief status to advance Claire’s U.N. plans? What color can Claire dye her hair to help Frank’s campaign? This leads spectators to find solace in the fact that even if they are not political heavyweights, at least they are not stuck in a partnership built first on drive and second — if that — on love.

To a single person, this dysfunction offers suspense and intrigue, but to a couple, the unromantic pair marks a comforting point of contrast. While Claire would be on a run and Frank would be playing video games in the basement, the couple watching together for hours on end has a relationship that thrives on the joy of each other’s company.

So, I guess I get it. For couples, House of Cards is much more than the captivating and suspenseful experience it is for a single viewer. It provides a sense of satisfaction. And though part of me wishes I had someone to share this experience of comfort and self-affirmation, I find my own comfort in the fact that I didn’t have to share my pad Thai or my blanket as I binge-watched. 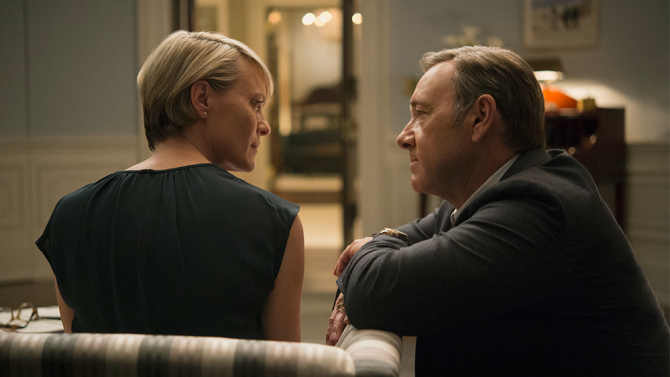