As a student and proponent of stoicism, I was incredibly excited to see the New York Times not only publish an article about stoic philosophy last month but watch as the article become of the most emailed and viewed pieces on the entire site. At the same time, as a writer on this topic, I also had an embarrassing human reaction: jealousy. Why did Professor Massimo Pigliucci get this opportunity and I didn’t? Why are things so unfair?

Of course, this is selfish—and like most selfish things, also short-sighted. Because this article almost certainly introduced tens of thousands of people to a topic I care about, people who would be better of for it, and perhaps eventually check out my work. Most importantly though, here was someone that I could reach out and learn from, someone that without having published, I would not have known either. And so with stoicism, we learn to fight these negative reactions and attempt to counteract them with positivity, with excellence or with virtue.

I ended up sending an email to Massimo, who is a professor of philosophy at CUNY-City College and he was kind enough to consent to an interview. A few years ago, I was lucky enough to interview Gregory Hays, one of the translators of Marcus Aurelius’s Meditations and considered this an opportunity to pick up where that chat left off. (and ironically, I ended up getting featured in the Times myself for totally unrelated reasons shortly after). I suppose it’s fate.

Tell us about your introduction to stoicism. Which book/philosopher did you read first? How old were you? How did it strike you?

Must have been Marcus Aurelius, when I was in high school in Italy. You see, there you have to take three years of philosophy (if you enroll in the type of high school called a “scientific lyceum,” which I did), and of course you start with the pre-Socratics and keep going through late modern philosophy. The Stoics were not a large part of the curriculum, but we read them, especially Seneca (also in Latin classes); moreover, the concept of Stoicism was familiar to me from studying Greco-Roman history, both in middle and high school.

The whole thing struck me initially as interesting, but a bit alien. I suppose I was under the (misguided, as you know) impression that Stoicism was a kind of Spock-like attitude toward life, and as much as I loved the homonymous Star Trek character, I just couldn’t see myself (or anyone else, really) actually practicing the thing.

But I returned to Stoicism more recently, after years of looking for a more organic philosophy of life than the somewhat heterogenous approach known as secular humanism. First I studied virtue ethics, especially Aristotle and Epicurus, and then I arrived (again) at the Stoics, largely through reading some of the stuff posted at the Stoicism Today blog (the same people who organize Stoic Week every year).

What do you think the biggest misperception of stoicism is?

What I call the Spock Syndrome, the idea that Stoicism is about suppressing emotions, going through life with a stiff upper lip. As you know, it is nothing of the kind. Stoics considered theirs to be a philosophy of love (an emotion!) toward all humankind as well as nature itself, and they were very concerned with social action (unlike, say, the Epicureans).

What the Stoics taught was to acknowledge our emotions (which are, after all, inevitable), but also reflect on them and their sources, distancing ourselves from them enough to be able to give (or, as the case may be, withdraw) our “assent.” That way we begin to cultivate positive emotions (like a concern for others), and reject as unhealthy the negative ones (like envy, or anger).

How did your New York Times op-ed How To Be A Stoic come about and what has the response been like?

I had published another article in the NYT last year, on the difference between science and pseudoscience, what in philosophy is known as the demarcation problem, which is close to my academic specialty and scholarship. The more I thought about Stoicism, the more it seemed like the topic would be appropriate for a second op-ed, especially since The Stone had recently published a piece critical of Stoicism.

So I wrote to Simon Critchley, the managing editor of The Stone, pitching the idea. He liked it, and after the usual back and forth editorial bouts, the piece got published.

The response was surprising: the NYT editor wrote to me the day after publication, saying that my essay was the most emailed, and the 7th most read piece on the entire New York Times site, which is astounding. As a result, I was approached the same day by several major publishers asking me to “turn” the op-ed into a small book. As you might imagine, it doesn’t quite work like that, but my agent and I are now working on a proposal for such a book, loosely inspired by the NYT piece.

I’ve often wondered if part of the reason stoicism is less popular with academics is because it tends to be a toolkit designed for a world very different than the ivory tower. Do you find there is any truth in that? How has stoicism helped you in academia and as a professor?

Oh yes, very much so. As much as I love being an academic philosopher (which for me is a second career, after more than 20 years as a practicing biologist), there is a widespread skepticism, if not disdain, in our circles for anything that smells too much of practical utility — gods forbid that philosophy actually be useful to people outside the ivory tower!

Indeed, it is in part as a reaction against this attitude that recently I started an online magazine (scientiasalon.org) devoted to nudging professional academics to explain to the general public what they do and why it is important, or just cool.

But back to Stoicism: my interest in it, and my practice of it, have not so far either helped or hindered my academic career. They have largely been on the side of it. But things may be about to change: this coming Fall I will be teaching a course on ancient and modern (practical) Stoicism at City College, after which I will take a sabbatical to travel in Italy and Greece to deepen my understanding of that philosophy. We’ll see…

Tell us about your stoic meditation practice. It sounds like you have a very interesting 21st century adaptation of it.

Oh, I doubt it’s original. It is my personalized version of what is recommended by the folks at Stoic Week, or by authors like Donald Robertson (in Stoicism and the Art of Happiness).

Basically, I begin with a morning meditation which includes a few components (depending on how much time I have before going to work): certainly a contemplation of the challenges that I expect to face during the day, during which I remind myself of which of the four cardinal virtues (courage, self control, equanimity and wisdom) I might be called to exercise.

I then visualize Hierocles’ Circle, an exercise in which you begin with yourself, then gradually expand your circle of concern to your family, your friends, your fellow citizens, and the world at large.

Next, I do a premeditatio malorum, a visualization of some bad thing that might happen that day. This can be as simple as getting irritated on the subway by inconsiderate fellow riders to my own death (I suggest people don’t start with the latter, and don’t do it often, as it can be disturbing). The point is to get acquainted with those “dispreferred indifferents,” as the Stoics called them (indifferent to one’s virtue and moral character), so that one is better prepared if and when they actually happen (this is similar to techniques used in cognitive behavioral therapy to deal with one’s fear, techniques that were, in fact, directly inspired by Stoicism).

Finally, I pick one Stoic saying that I particular like (I have an ever growing spreadsheet of them, available for public use) and read it over a few times.

I also engage in an evening meditation, just before going to bed. This takes the form of a Marcus-style philosophical diary (not for publication!), during which I revisit the events of the day, asking myself the three famous questions posed by Epictetus: What did I do wrong? What did I do (right)? What duty’s left undone?

What is your favorite quote or line? Perhaps one you think of most often?

It’s hard to have a single favorite, but this one, in my mind, both captures one of the essential points of Stoicism (the distinction between things we have control over and things we cannot control and therefore should not worry about), as well as the Stoics’ sense of humor:

“I have to die. If it is now, well then I die now; if later, then now I will take my lunch, since the hour for lunch has arrived – and dying I will tend to later.” (Epictetus, Discourses I, 1, 32)

As I mentioned earlier, a small book on “how to be a Stoic,” followed by a larger project to be carried out during my sabbatical. The first book will be about Stoicism as a modern practical philosophy, updated to the 21st century. In the second project, which at the moment is a bit more fuzzy, I’d like to write about the times and lives of four of the “Roman” Stoics: Cato the Younger, Seneca, Epictetus and Marcus Aurelius. This will not be primarily either a historical or a biographical project (though both history and biography will figure into it), but a philosophical one, in which I will try to see what moderns can learn from the writings and actions (and, as the case may be, failures) of these four famous Stoics. Should be fun, fate permitting!

I hope you’ve enjoyed this interview on stoicism with Professor Pigliucci and if the topic interests you at all–and I promise it can change your life–I strongly suggest you pick up one of the original texts such as or . Here are two quick introductions I’ve done on stoicism, as well as a TEDx talk, and of course, reddit.com/r/stoicism is also a great resource. You can also check out the Professor’s new site, HowToBeStoic.org 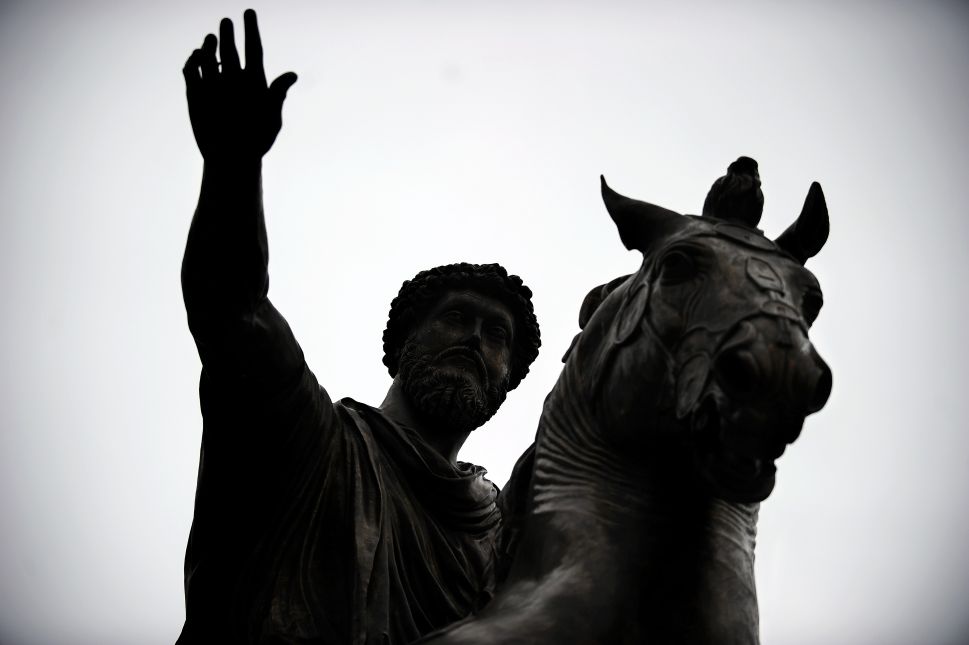