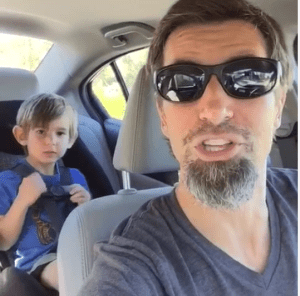 While holding the hand of his four-year-old son/co-star, Josh Gaines carefully navigates a professional career as a Vine personality.

What began as a hobby and some creative fun has led the funny father known as Josh Darnit into pro-vining, a million dollar industry where teenage stars preparing for their next big move into stand-up or TV writing rake in six figures annually.

“It’s strange to see how a very creative community that I wanted to be a part of has gotten very competitive,” he told the Observer.

Mr. Gaines—who has amassed nearly two million followers—has been on Vine since its inception and has been working as a professional Viner since November 2013. With the help of his four-year-old Evan (and occasionally his daughter and teenage son), he makes nearly-daily Vines. While almost all of them are fun and silly bits of his everyday life, the few he does for brands each month are enough to pay the bills.

We chatted with Mr. Gaines about his Vine career and child co-stars:

How did you start making Vines and what inspired you to involve your kids? I think it’s safe to call your son Evan your co-star.

I was working in the same kind of space (tech and mobile video) when I heard Twitter bought this video company called Vine. I posted a few times in the first few weeks, took a little break, then after a few months, I saw a cool, creative thing happening on there. I thought, “Wow, I wanna get in on this,” so I just started trying stuff. The first one that really stuck was an Evan Vine, and then we had our first one that went viral. After almost a year I was a full-time professional Viner.

How did Vine become your career?

It was a timing thing. They were winding down at my old company, and I had already been approached by a few companies that wanted me to do some brand work on the app. One was Disney, and they were reaching out about Evan specifically. I didn’t believe in it to the point where I’d quit my job at the time, but hey, I was getting laid off anyway.

What’s the difference between Vining professionally and as a hobby?

Back then it was like an obsession, but I was thinking about it because I wanted to be the first one with an angle on something. It was like a rush too. Now, i’m constantly thinking about Vine because it’s so competitive and there’s so many people making a lot of money on it. We’ve been doing it a while, and I’m working it like a business and taking trips to LA for it. Now that’s it’s professional, I’ve tried to back off Evan a little and use other avenues so people wouldn’t turn on him. Now he’s the special feature that comes out once in a while, but people in LA hit me up because they want to Vine with him.

What else should I know about the professional Vine industry?

It’s strange to see how very a creative community that I wanted to be a part of has gotten very competitive, and while people still do collaborative with each other, it’s a very different mood now. It’s been strange to see the community devour itself. There’s A-list Viners who make tons of money, people who are true artists that are too mature for the audience, and there’s this kind of war between people who are holding on to what Vine used to be and others who are embracing what it’s become. I’d love to see it as a unified thing, but there are people making hundreds of thousands of dollars each. There’s millions in the industry.

What’s the process of making a new Vine like for you and Evan? Are they mostly planned or spontaneous? Does Evan help you come up with the ideas?

It’s a big mix. Sometimes I’ll just be in the shower and get an idea and jot it down real quickly. Usually, what does best is just a stinging one-liner. I’ll get an idea like, “Oh, it’d be really funny to hear him say this,” and then I’ll build a skit around that. Others are really organic and those can be the best.

Does Evan help you come up with the ideas?

Inadvertently, yes. One day he was like, “I want to make a Vine about me eating this pear,” so I just told him to say it again and I recorded it and it was great. Our biggest one is with the song “Selfie.” I had been working on a different Vine for a brand that day, and I just heard him outside singing “but first, let me take a selfie,” and I just had an ah ha moment. I wouldn’t say it’s a conscious contribution, but he says things that inspire us a lot.

You also work with your daughter Johnna and son AJ sometimes. Is this a family bonding experience for you all?

It’s funny, Johnna is the most enthusiastic. She loves it when I have Vine ideas and even wanted her own separate account. It can be fun for Evan, but mostly he’s a four-year-old kid about it. AJ, I don’t know. He’s a teenager. It’s tough to get a genuine reaction out of him, but he’d like to maintain the persona that I’m an irrelevant old guy and he only tolerates me because he has too. He likes the end product, Johnna likes the process and Evan likes when he gets to go to the toy store because I’m bribing him.

I have home videos from my childhood, but the video documentation that you’ll have of your children growing up is something completely different and really unique. Would you say you’re using Vine in an innovative way on that front?

We’ve definitely realized that and acknowledged that. Even though a lot is staged and a big part of it is just having iPhones, it is unique. When we first got a video camera a while back, there were tips on how to make better videos and one said to make 10 second videos. I think we’re putting our best foot forward. I still go back and look at old Vines. We didn’t do it intentionally, but very early on we noticed that this is a cool way to document our lives. 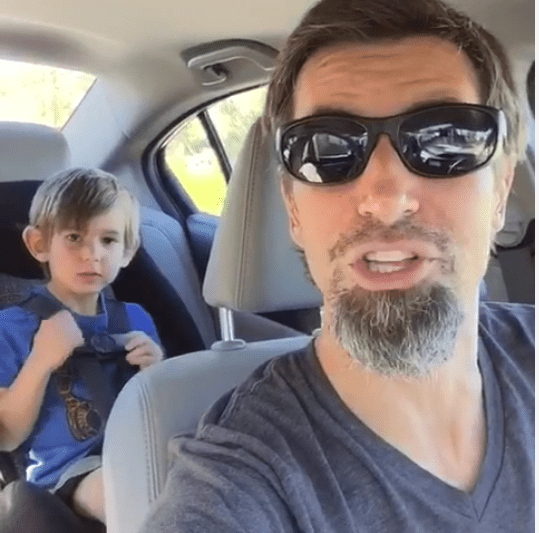