There’s comic opera, which is funny, or at least is supposed to be funny, and ends happily. And then there’s tragic opera, sometimes called grand opera, which concerns itself with the downfall of the mighty, and, as you might guess, ends in catastrophe and heartbreak.

By that definition, the Met’s revival of Verdi’s Ernani Friday night was every inch a tragic opera, though without being grand in any way. Its grisliest calamity was not the one the composer devised but rather one the production’s star, Plácido Domingo, brought upon himself.

The veteran tenor’s appearances at the Met date back to 1968—46 seasons ago—and he has reigned as a star here and in the world’s other opera houses since then. As time and the inevitable wear and tear of decades of performing the most demanding music written for the human voice took its toll, he first edited his repertoire down to parts with few high notes, and as early as the 1990s he imposed transpositions on some of his warhorse operas like La Forza del Destino and Otello.

Now, at 74, Mr. Domingo has decided to take the drastic step of redefining his vocal category, performing roles from the Italian baritone category.

The problem is, he’s not a baritone, but rather a tenor without high notes. The tessitura, or general range of baritone roles, falls comfortably in his voice, true, but the lower keys sound dull and unexciting as he performs them. Even the many high F’s and G’s customarily performed by baritones in Verdi operas feel anticlimactic.

In previous seasons, he has had some success at the Met and elsewhere with roles like Simon Boccanegra and the elder Germont in La Traviata. Significantly, these are character parts, authority figures in late middle age, and Mr. Domingo has made something interesting of them through vivid declamation and expert stage presence.

In Ernani, though, Mr. Domingo is playing the historical character of Carlo V who, according to history, was just 19 at the time of the scene depicted onstage of his election as Holy Roman Emperor. Even allowing for dramatic license—the opera is based on an overheated melodrama by Victor Hugo—the character should look and sound young or at least vigorous.

Mr. Domingo and the Met’s makeup and hair departments did their best. He strode on in the first act painted and wigged so aggressively that the audience didn’t even recognize him well enough to grant him the traditional superstar’s entrance applause. As he stepped forward into bright light, the effect was grotesque, recalling the heavily spackled Joan Crawford’s attempt to exude youth in the 1964 thriller Strait-Jacket.

Worse, his voice, though remaining remarkably true to pitch and even in vibrato, sounded in many ways that of an old man. His breath was short, so the phrases were choppy, and he did not attempt anything in the way of dynamic variation: Everything emerged mezzo forte. Unless you were following the libretto, it was impossible to tell whether Mr. Domingo was singing a love song or a battle cry.

The most distressing moment in Mr. Domingo’s performance was the ensemble “O sommo Carlo” near the end of the third act. Carlo V takes the lead in this piece, unfurling a majestic legato melody Verdi placed squarely in the most glamorous part of the baritone voice. But, as elsewhere in the opera, the tune lay below Mr. Domingo’s most resonant range, and, worse, he nervously rushed the tempo to get through the long phrases. As a result, one of the gems of the score fell into disarray.

That this revival of Ernani was primarily a vehicle for Mr. Domingo’s ongoing presence at the Met was made obvious by the workaday quality of the rest of the cast. Soprano Angela Meade found her way handily around all the notes of the virtuoso part of Elvira, but without much sense of joy or bravura. Francesco Meli’s tenor sounded healthy and strong as the noble bandit Ernani, though he tended to rant. By far the most interesting singer was Dmitry Belosselskiy, whose rich anthracite bass and old-school semaphore acting in the role of Silva demonstrated just how exhilarating a full-tilt performance of this opera could be.

Indulging Mr. Domingo in his many musical compromises was conductor James Levine, who is currently in his fifth decade at the Met and therefore might be expected to know something about overstaying one’s welcome. He still knows how to make a Verdian allegro leap and dance, but his musical taste seems mired in the mid-20th century.

For this 1844 opera, the composer wrote in the bel canto tradition, with each major aria ending with a cabaletta, a repeated, rhythmically vigorous section bringing the piece to a rousing climax. Following the corrupt performance practice of the 1950s, Mr. Levine cut half or more of each of these cabalettas, leaving the remaining fragments sounding trivial and pointless.

The power of a well-crafted and intact cabaletta is supremely evident in the very first track of the new Warner Classics CD Héroïque, a recital of 19th century French arias by the young American tenor Bryan Hymel. With dazzling confidence, he opens his program with “Asile héréditaire” from Rossini’s Guillaume Tell, which climaxes in a long cabaletta rising repeatedly to that protean tenor note high C. Mr. Hymel’s muscular, almost metallic voice accomplishes the paradoxical feat of making this grueling music sound simultaneously absolutely secure and death-defying, a dizzying series of vocal gymnastics culminating in a rock-solid dismount.

Mr. Hymel goes on to demonstrate he is capable of more than just feats of strength, finding romantic desperation in the prison scene from Verdi’s Les Vêpres Siciliennes and tragic dignity in “Inutiles regrets” from Berlioz’ Les Troyens, the opera of his surprise Met debut in 2012. Excerpts from obscure titles like La Reine de Saba, Sigurd and even L’attaque du Moulin impress because the tenor lavishes on them the same level of thoughtful musicianship and rock-solid technique he brings to more familiar material.

He excels at the brooding intensity of “Nature immense” from La Damnation de Faust and brings a sense of rapt wonder to the best-known number in this collection, “O paradis” from Meyerbeer’s L’Africaine. In many ways this is the absolute highlight of the disc because he makes this warhorse aria—sung by everyone from Caruso to Roberto Alagna—sound like a fresh discovery. (And it bears mention that, unlike most tenors, Mr. Hymel includes the aria’s cabaletta, rocketing to yet another blazing high C.)

In the wake of that dreary Ernani last week, it’s encouraging to note that the Met seems to
recognize that artists like Mr. Hymel are the wave of the future. In fact, if rumor is to be believed, he will soon flaunt those high C’s of his in the company’s first performances of Guillaume Tell in over 80 years. 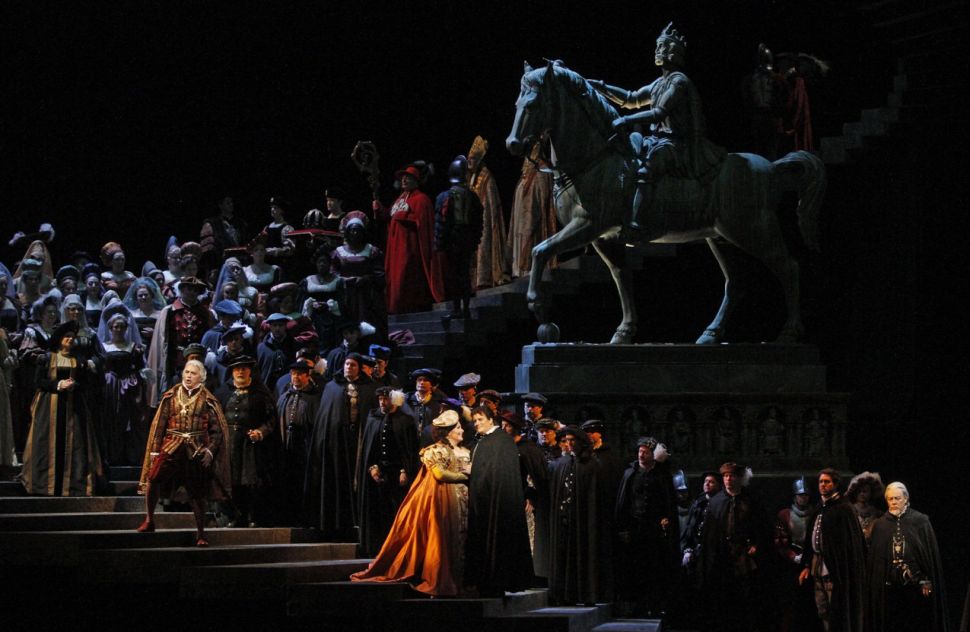