NORTH BERGEN – The emcee at Monday’s night political rally inside the packed, mirror-walled banquet hall at North Bergen’s Schuetzen Park said it all at the start.

Hudson County has been hot in the news as two of its most prominent politicians have come under attack in recent days. Befitting Hudson’s gladiator political culture, both men figuratively sharpened their swords and raised them at their perceived enemies.

After a report emerged on Friday that the Justice Department is preparing to bring criminal corruption charges against him, U.S. Senator Bob Menendez (D-NJ), a son of Union City, declared “I am not going anywhere.”

After a Monday morning raid by officials from the state Attorney General’s Office on North Bergen Town Hall for reasons yet to be determined, North Bergen Mayor and state Senator Nick Sacco (D-32) made his own defiant declaration.

“We’re going to go out and crush them,” said Sacco to loud cheers from a crowd of more than 1,000 supporters at the previously scheduled reelection campaign rally for the mayor and his commissioner slate. “We have opposition, we know we do. They’re noisy. They’re vicious. They lie. Actually, they’re mental. They are the lowest you can get. I’m not concerned at all.”

A devil-may-care attitude was evident both inside and outside of the Schuetzen Park rally as both politicians and protesters told each other to go to hell.

“We’re sick and tired of corruption. Mayor Sacco, Senator Sacco, Superintendent Sacco – he makes the same money that the President makes,” said protester German Fernandez, 48, of North Bergen, a truck driver, referring to Sacco’s two political positions and his third job as North Bergen’s director of elementary and secondary education “What happened [this morning] is a wake-up call to the town of North Bergen. Sacco is a dictator.”

Two groups totaling more than 100 protesters forced the rally’s attendees to walk through a cordon of called-out abuse. Enough plain-clothes police officers were present that some protesters confused reporters with cops.

“Shame on you!” shouted some protesters. “Sacco afuera! (Sacco out! in Spanish).

“Go home! Get out of here!” some rally-goers shouted back, embellished by a few one-fingered salutes.

Sacco, 68, North Bergen’s mayor since 1991 and state Senator since 1994, assembled a wall of local and statewide power behind him on stage to show that he was on his home turf.

Then Hudson County Executive Tom DeGise set a rhetorical tone for the evening.

“Let’s open up an industrial-size can of whoop-ass between now and [the May election],” DeGise, who is also up for reelection this year, said.

Other politicians present picked up on this theme: at least a dozen versions of the phrase “kick some ass” were heard from the stage.

“You have a couple of dozen [protesters] out there, and several hundred people in here. Do the math,” said Bergen County Democratic Chairman Lou Stellato. “Let them yell tonight, because they’re going to moan on Election Day.”

In a one-on-one interview with PolitickerNJ after the rally, Sacco first set his sights on the man he threatened to politically crush, rival North Bergen mayoral candidate Larry Wainstein.

“Larry Wainstein is running around making a fool of himself. They want a change – a change back to Joe Mocco, who was stealing the town blind,” said Sacco, referring to the North Bergen town clerk who was indicted in the late 1980s and later convicted for racketeering, specifically for facilitating illegal garbage-dumping in the Meadowlands.

Sacco’s campaign has claimed that Wainstein is a “front man” for Mocco, as well as questioning Wainstein’s North Bergen residency, asserting that that the opposition candidate actually lives in the Bergen County borough of Franklin Lakes.

As for the law enforcement raid that led some North Bergen residents, including the protesters, to make accusations of corruption, Sacco shrugged.

“They came in. They took certain records. I’m not really concerned at all,” said Sacco, confirming that law enforcement officials took records from the North Bergen Parks and Recreation Department. “The department runs really well. I believe that when they’re done, they’re not really going to find anything. It’s not the first time that an investigation has taken place, and it’s not the first time that it went nowhere.

“They could have simply made a phone call, and we would have had all the records ready for them,” Sacco added. “This was a show.” 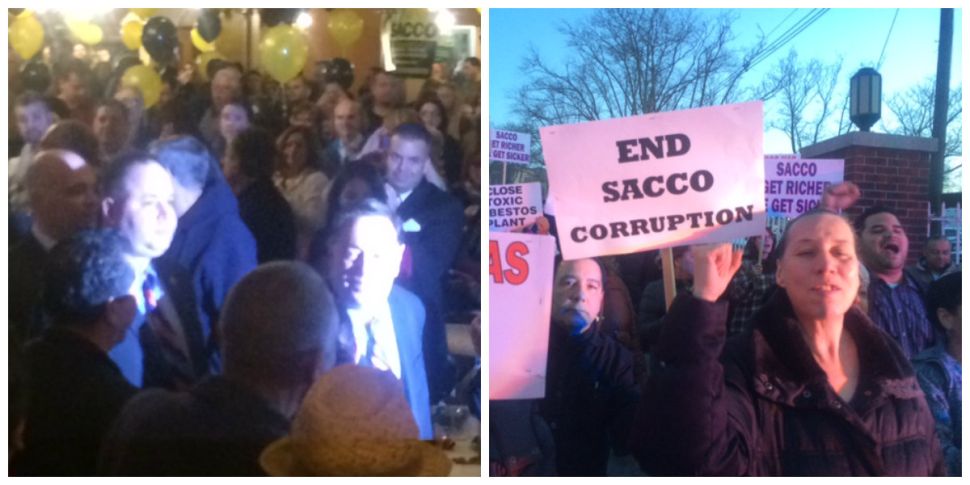