Riding up in the elevator to 91 Central Park West’s Penthouse A, two things are likely to catch a visitor’s eye: The beautiful Art Deco scenes crafted of inlaid wood—one woman on horseback and another walking her hounds through nearby Central Park—and the fact that one of the panels is slightly marred, having lost a slender section.

It is a suitable introduction to the apartment that lies beyond the keyed elevator doors, which the new owner may wish to replace with a fob, noted Corcoran broker Brian Rice, who shares the listing with colleague Douglas Albert.

The 15th-floor penthouse, an estate seeking $27.5 million, has grandeur, including an ample Central Park-facing terrace that spans the entire eastern side of the building (100 linear feet) and wraps around to the south (there’s also a back terrace off the kitchen for barbecuing), but the place will require a full overhaul, with carpets in 1970s’ oxblood and moss green and time-capsule bathrooms to match, not to mention a mounted rotary phone and mirrored walls.

The penthouse constitutes half of the magisterial spread that once belonged to William Randolph Hearst (Giorgio Armani owns the other half). Though, as rumor has it, the real occupant was Hearst’s mistress, Marion Davies, whose allowance was said to be provided for by the rental income generated by the rest of the building, which went co-op in the 1960s.

As any visitor to Hearst’s more-famous domicile knows, the newspaper titan was a big fan of the eclectic European look; his residential followers at 91 Central Park West seem to have been similarly captivated by Old World design. The apartment boasts wood-paneled walls, ornate mantelpieces and rustic Tudor chandeliers.

Mr. Rice said that it’s not clear how much of the design is original to the apartment, but he suggested the next owners may wish to reduce its wood quotient. They will, at least, probably want to replace the elaborately mullioned, Elizabethan-style stained-glass windows with something easier to see through. “It’s Hogwarts!” he said of the aesthetic. “But can you imagine what the skyline would look like through different windows?”

The view is even better from the top-floor tower—the apartment’s four bedrooms, four baths, kitchen and living room are all arrayed on the floor below—which encompasses a single large room where the previous owners built out a large bar.

But for all the apartment’s old-fashioned quirks, it’s something altogether modern that mesmerizes visitors as soon as they step out onto the terrace.

“People are transfixed by the CNN clock,” Mr. Rice said with real bewilderment. “I guess you can see the time on it.” 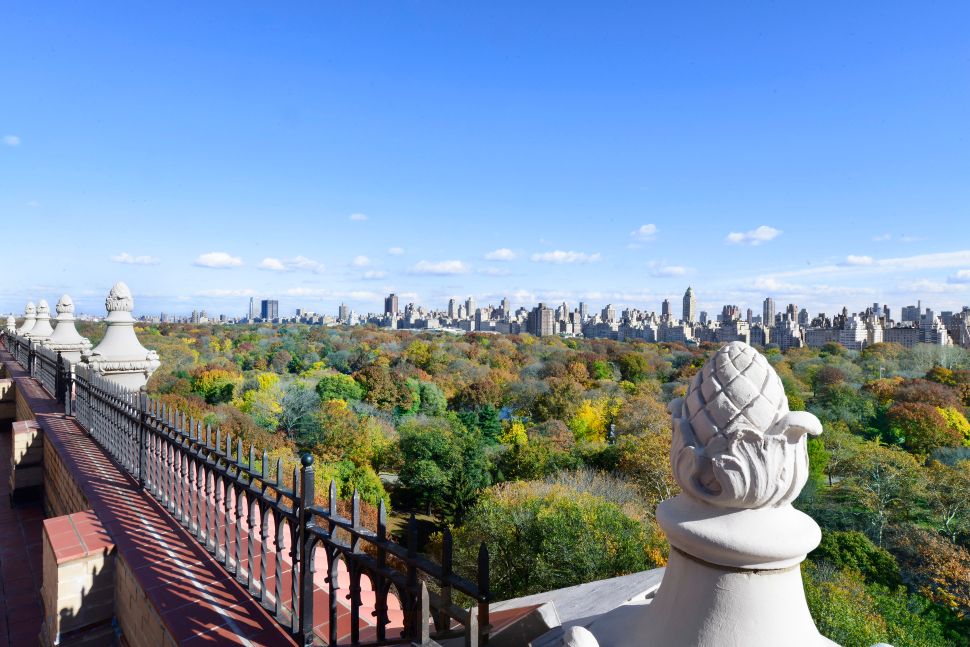