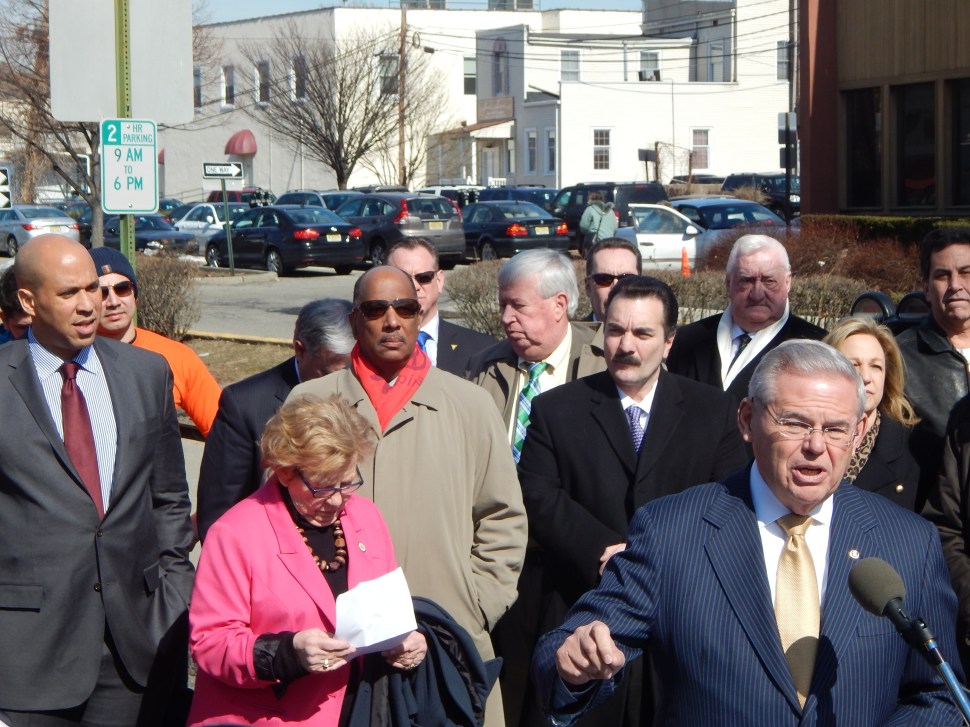 If scandal is the stuff of which politics in this country — but particularly in New Jersey — is made, this week was a particular important one.

It should have been, at least. On the national stage, would-be two-time presidential hopeful Hillary Clinton found herself embroiled in an email flap that some say has forced her to fast-tracked an announcement for her bid for the White House, now expected as earlier as the end of the month. Days later U.S. Senator Bob Menendez was thrown under the same microscope, battling allegations that he used his senate seat to illegally aid a personal friend amid the specter of criminal corruption charges that some say are imminent.

With seemingly so much red meat in the , it should had been a feeding frenzy — if not on Capitol Hill than in New Jersey, where Republicans, Clinton opposition groups, and a handful of 2017 gubernatorial aspirants all stand to benefit from the demise of either Democratic party star.

Capitol Hill was another story, but in Trenton and most other stages upon which political war is waged in this state, politicians in both Democrat and Republican circles seem to have largely shied away from efforts to capitalize significantly on either the news of Menendez’s alleged culpability in a corruption scheme or the precarious situation Clinton’s personal email practices have put her in ahead of a 2016 campaign. Gubernatorial or senate hopefuls whose careers would be greatly advanced should Menendez be forced to resign made no attempts to feed the flames of what appeared, at least in media coverage, to be the beginning of a raging funeral pyre. And Republicans, unlike their counterparts on Capitol Hill, largely gave Clinton and her defenders a pass on what could otherwise have been a field day.

It was a rare showing of restraint for a group of pols not unaccustomed to this kind of controversy — or beyond using it as fodder for their own political maneuverings. For Republicans, at the very least, an easy case could have been made that two top Democrats running aground on scandal was emblematic of some deep, underlying problem with the Democratic party in the state.

But that didn’t happen either. And maybe that’s not surprising.

“Republicans hope it will be damaging, and Democrats hope it won’t be damaging. And we’re not sure whether they will be at this point,” said Patrick Murray, director of Monmouth University’s Polling Institute, explaining why so few have jumped at the opportunity to score fast political points these last few days.

If there’s something political chatter surrounding the two controversies did show this week, it’s that there is virtually no end to the implications either one could have on the political landscape, particularly in New Jersey, where both Menendez and Clinton occupy spaces of out-sized importance. In the race for the Democratic nomination in 2016, Clinton remains the undeniable front-runner and candidate of choice among the vast majority of Democrats in the state, most of whom are certain that after a slight hiccup in 2008, when progressives campaigned hard to deliver the former first lady back to the White House but came up short against Barack Obama, next year is her year. And in many areas more, from gubernatorial contests to Hudson County politics, Menendez, despite his presenting himself as above it all, still plays the role of inveterate power broker, deciding in large part who moves up and who gets bounced from the career ladder.

Republicans in Washington may be trying to make a mountain out of Clinton’s email calumny, but it’s being perceived as little more than a molehill here. The handful of Republican lawmakers PolitickerNJ quizzed on the controversy said that while damaging, the issue isn’t likely to become the smoking gun some hope it might, partly because the real campaigning has yet to begin, and partly because it’s not totally unique: Republicans, some expected to vie for the nomination in 2016, are facing similar controversies relating email and electronic communications of their own. Wisconsin Gov. Scott Walker was once investigated because his staff used a private Internet network, for example.

“It will be very interesting to see what happens if this scandal takes root and she doesn’t run,” said state Senator Joe Pennacchio (R-26), before hedging: “But again, the election is so far off.”

Even Gov. Chris Christie, who everyday grows closer to a 2016 campaign, still finds himself under scrutiny for his electronic communications practices relating to Bridgegate, the scandal involving the closing of commuter lanes at the mouth of the George Washington Bridge in 2013. As Democrats point out, text messages and emails from his staff and from the Republican himself have played a leading role in investigations into that controversy, and like Clinton, Christie too has often used privacy arguments to fend off requests to fork over sensitive materials from the press and others.

“I take her word — anything sensitive, she either spoke on the phone or was in writing, and she was very careful about what she put in those emails,” said Assemblywoman Valerie Vaneria Huttle (D-37), adding that Bridgegate poses the same problem for Christie. “So we still have not defined the law, and the law is still unclear. But this just highlights the sensitivity of email today.”

At the very least, the email issue has opened up Clinton to attacks from Republicans and detractors within her own party as she approaches what looks like an inevitable declaration of candidacy, said to be announced this month or next. But it’s partly because she’s in the midst of prepping for a 2016 campaign — and because she seems to be the default front-runner for the party’s nomination — that many aren’t reading too much into the issue.

“It’s a distraction. It’s an election season, so people are out there saying let’s get somebody, let’s embarrass somebody. From the national level on down,” said Leroy Jones, Essex County Democratic Party chairman.

“Political campaigns change everything, because you go from being above politics, to being a political animal. Chris Christie has felt that, and certainly Hillary Clinton has too,” Murray notes, adding that it’s likely to “remain only a small issue” going forward.

Menendez’s situation, on the other hand, hits closer to home. A week ago, information leaked that federal prosecutors were preparing to smack the ranking Democrat with criminal corruption charges as part of a years-long investigation into his relationship with Florida optometrist Salomon Melgen, sending reporters and politicians into a frenzy. Menendez, meanwhile, stood defiant, by all indications determined not to let the allegations get in the way of him going about business as usual.

It’s the specter of those charges in particular that has occupied the attention of most insiders and observers this week, as they threaten to throw totally of course one of the central developing narratives in state politics this year: the fast-materializing race for the governor’s seat in 2017. Still an overwhelming influence in the North Jersey counties of Hudson and Bergen, Menendez is expected to play a major role in that contest, specifically by delivering Jersey City Mayor Steve Fulop to the governor’s mansion.

In an everlasting struggle between north-versus-south, statewide races have long been determined by the former’s ability to unite in the face of the latter’s raw organizational power. South Jersey, brokered by Democratic boss George Norcross III, has usually been able out-compete North Jersey in that game, where political groups often find themselves fractured among competing interests. But statewide races still ultimately come down to numbers, and as the former’s vice-gripe on the political chess pieces in the state has waned in recent years, those long-fractured groups in the northern reaches of the state continue to pool together — giving them an advantage in voter population no amount of political clout in Trenton could trump.

And that could put Fulop, with Menedez and the rest of Hudson and Bergen Counties leadership behind him, at a distinct advantage against the competition — which includes Senate President Steve Sweeney (D-3), long thought the frontrunner for the party nomination with a powerful leadership position in Trenton and the apparent support of GNIII.

But an indictment of Menendez would throw a wrench in that strategy, leaving Fulop boss-less and likely without the political muscle needed to fend on his own. Or it could result in the removing of one of those gubernatorial hopefuls from the field entirely, bumping them up into Menendez’s vacant seat. Either way, it would drastically change the current political calculus.

“I think it’s more interesting from a democratic perspective, because of Sweeney, Fulop and Murphy,” said Assemblyman Sean Kean (R-30), when asked how Republicans might benefit from Menendez’s ousting. “If you’re one of those guys, you’re saying wow, maybe one of my opponents is going to be happy getting the senate seat, and that’s going to make the race less combative or contentious.”

And yet those charges have yet to drop, leading some to wonder whether there was any truth to them in the first place. And Menendez has been determined in his efforts not to let the flap dog him, leaving his supporters — and would-be benefactors of his demise — to await the next move.

(One Hudson County source strongly argued to PolitickerNJ that the DOJ leaks are simply a fictitious ploy to undermine Menendez amid tension between the hawkish Democrat and the White House).

“Of course, Hudson County always has statewide implications, and this can be a domino effect into the gubernatorial race,” said Murray. “But as of right now, nobody is putting smart money on Menendez being out.”

That the situation is a sensitive one was a fact highlighted over the course of the week, as lawmakers in Trenton and Menendez’s closest allies in places like Hudson County spent time pledging tentative allegiance to the embattled Democrat, or in some cases standing firmly alongside him. That included Assembly Minority Leader Jon Bramnick (R-21), who told NJTV he “[cautions] the media and I caution the public on allegations, whether its against a Democrat or Republican.” It also included Sweeney — who, as noted earlier, could greatly improve his position in a race with Fulop by fanning the flames of Menendez’s corruption allegations — but who also refused to take pot shots, saying only that “no one should speculate on anything right now.”

Then there was Friday’s press conference in Englewood, where Menendez appeared for the first time publicly since his damage-control press conference one week ago to project confidence amid a scrum of federal and state officials who by turns applauded his championing of state issues in Washington — almost as if the whole criminal indictment thing never happened.

“Unless something literally forces him out of power, there’s absolutely nothing to be gained by trying to make a move into Hudson County politics at this point,” Murray said of anyone who might stand to benefit from a vulnerable Menendez. “Frankly, it would be foolish to assume that will happen, because it would come back to bite you and bite you hard.” 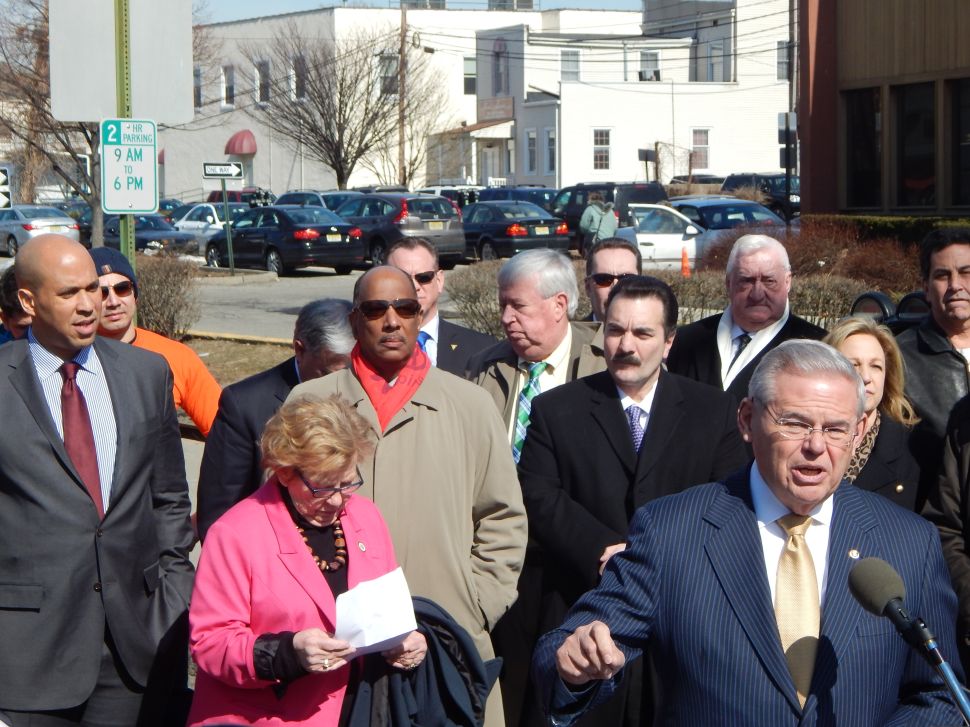