Watch out, BLADE: there’s a new player in the Uber-for-helicopters game.

A new company, Gotham Air, lets users book individual seats on helicopters bound for JFK and Newark airports, all on-demand from their newly-launched app for Android and iOS. If you’ve got the cash—between $199 and $219 per seat—it’s a pretty sweet alternative to sitting in an airport-bound taxi on a jam-packed highway, wrenching your hair out of your scalp with anxiety over whether or not you’ll make your flight.

CEO Tim Hayes, who used to work in entertainment, got the idea for Gotham Air after having to book a helicopter for former Guns N’ Roses bassist Duff McKagan. Even though Mr. McKagan only required one seat, Mr. Hayes’s only option was to charter the entire helicopter. The bill came to $2,200.

“It made me stop and think, why isn’t there a way for someone to buy an individual ticket on a helicopter?” Mr. Hayes told the Observer.

With Gotham Air, the airport taxi-averse can book individual helicopter seats for a fraction of what it’d cost to charter the entire vehicle. The system uses crowdsourcing to fill its flights; once a user sets up a desired helicopter flight, Gotham Air locates other users who might also like to hop on board. Once a Gotham Air helicopter has at least four confirmed seat sales (of a maximum six), it’ll fly.

“As people start to unbuckle, they say, ‘Ugh, it’s over already?'” Mr. Hayes confessed, not exactly ashamed. “They kind of want to take another spin around.”

Mr. Hayes was expecting the service to be popular amongst business travelers. Though they make up around 40 percent of Gotham Air’s clientele, Mr. Hayes was surprised to discover they were also popular amongst leisure travelers—groups of guys taking weekend trips to Vegas, and groups of women heading south to Miami.

“Almost every Friday we have at least one chopper full of three or four girls,” he said.

So how does Gotham Air expect to compete with BLADE, the other so-called Uber-for-helicopters? ThoughBLADE’s initial purpose was to shuttle users to and from the Hamptons, they now offer transport to New York airports, too.

“BLADE recently launched flights to the airport,” Mr. Hayes said, “but you can’t buy an individual seat—you have to book the entire aircraft.”

The last he checked, a trip to the airport would have cost him $900 for a single person.

BLADE does let users crowdsource their flights to the Hamptons, but “you can never do it for rides to the airport,” Mr. Hayes said.

And while paying $199 to $219 for a six-minute ride isn’t exactly economically efficient, it’s not that much more than hiring a town car, which could cost around $150, or even a yellow cab, which could be $80 or $90 after tolls and tip. And besides, it’s worth it to know you’re definitely going to make it to the airport on time.

“On a Friday at 5 o’clock, it’s not unreasonable that it could take up to two hours to get to JFK—you just don’t know,” Mr. Hayes said. By booking a helicopter ride, “you know how long it’s going to take.”

When asked about future plans for Gotham Air, Mr. Hayes said he couldn’t go into specifics. He did say, however, they’re “going to roll out to other destinations.”

They’ll be introducing “really cool, innovative uses for the helicopters that go beyond what people would guess,” he said.

We’d love for the expansion to feature flights from our remote Queens apartment to the nearest subway stop. One can dream, right?

Update, 3/17: BLADE reached out to the Observer, clarifying that its Bounce service—which shuttles customers to and from New York area airports—costs $695. 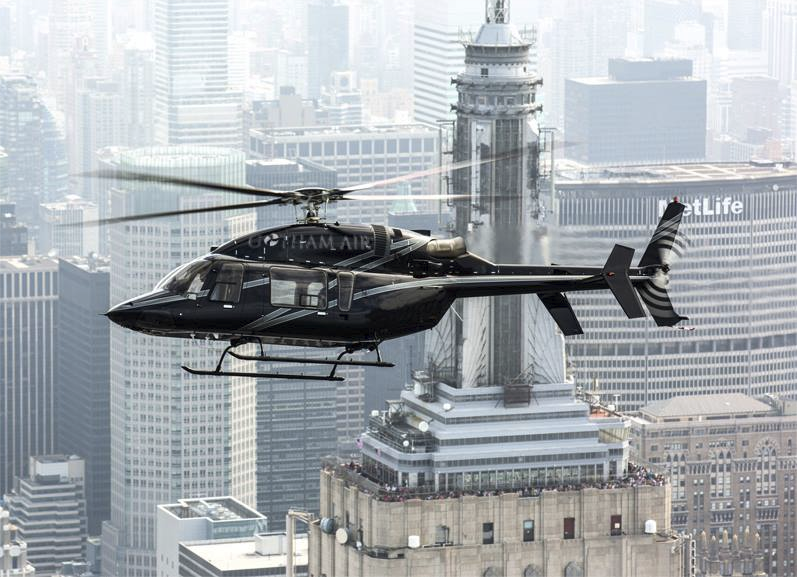