What issues are Middle-Eastern and African artists wrestling with right now? At the recent Armory Show art fair, The Observer talked to two influential Arab-based or -born art collectors on the art they were buying, or enjoying, now, and the problems facing artists in the region.

Also at the Armory, a panel focused on these problems, which the speakers said include: 1) critics and collectors usually expect, or even demand, politically charged art from artists working in conflict zones 2) the artists often face restrictions on travel, and censorship and 3) patrons used to buy art to support artists but more often now they buy for investment.

On the panel, collectors Sheikh Sultan Sooud Al Qassemi, founder of the Barjeel Art Foundation in the United Arab Emirates, and Princess Alia Al-Senussi, a London-based patron of the arts affiliated with the Tate, shared the stage with gallerists Roupen Kalfayan from Athens and Samar Martha of Ramallah during the Armory Show 2015 Symposium this past weekend. The panelists discussed contemporary art in the Middle East, North Africa, and the Mediterranean (MENAM) region, although much of the conversation concentrated on the hardship of being artists in conflict zones.

The panel discussion, “MENAM in a Globalized Cultural Economy,” began with the Sheikh Sultan Sooud Al Qassemi asking the panelists to keep in mind how politics and patronage affect art in the region when responding to his questions, as well as the ones from the audience.

Princess Alia Al-Senussi stressed that artists in the region need to better professionalize their practices and noted that Art Dubai, with its depth of programming and international exchange, has become one of the most important cultural events to happen in the Middle East

Sheikh Sultan Sooud Al Qassemi stated that one of the region’s problems is that most institutions are funded from the top down, with the exception of a few grass-roots organizations, but that he felt the Internet, and in particularly social media, has made the work of artists in the region more accessible to the rest of the world.

Before the panel discussion the Observer spoke with Princess Alia Al-Senussi, founding member of the Tate Museum Committee for Middle Eastern and North African Acquisitions and a member of the Middle East Circle of the Guggenheim, about the art she enjoyed.

What booths did the collector like?“I’m very biased, but I love Athr Gallery from Jeddah. [citing a booth that was a big hit at the fair]. It’s done so many incredible things in the Middle East,” she continued. “It’s really a force for good in Saudi Arabia. It’s a gallery that does so much more than just show or represent artists. They’re really helping to create the next generation of art lovers, art patrons and collectors. The way that they support their artists is humbling.”

Elsewhere, “I was taken by Fayçal Baghriche’s wall painting at New York’s Taymour Grahne Gallery. It was a beautiful idea of breaking down flags to give an aesthetically appealing vision of stars and constellations in a poetic universe,” Princess Alia Al-Senussi said. “I was also happy to see Saloua Raouda Choucair’s work at Agil Art Gallery from Beirut. She had the first show of an Arab artist at Tate Modern in 2013. And at Kalfayan Galleries, I just learned about the Greek artist Panos Tsagaris, who alters the New York Times cover stories about protests in Athens with sections of gold leaf to comment on the uprising’s relationship to economics.”

Later, we buttonholed Sheikh Sultan Sooud Al Qassemi to get his thoughts on the Armory Focus:MENAM symposium. “It was a great initiative to bring together all of these galleries, institutions and collectors from the Middle East,” the Sheikh told the Observer. “I think to introduce them to the New York crowd and introduce the New York crowd to them was a great idea. I’m already hearing about potential collaborations. It appears to be a very successful event, even from the very first day.”

He added: “I’ve heard from several galleries that collectors are buying work from the Middle East, not just collectors from New York but ones from Texas and elsewhere—people that flew in from other parts of the US especially to see the work on view,” he added.

“Are you buying?” we asked.

“I’m still deciding what to buy, but there’s work by a number of artists already in the Barjeel Art Foundation collection—including Lawrence Abu Hamdan, Dia Al-Azzawi, Shafic Abboud, Susan Helfuna, Marwan, Mona Hatoum, Ahmed Mater, Jumana Manna. There are so many of them here that I can’t remember them all.” 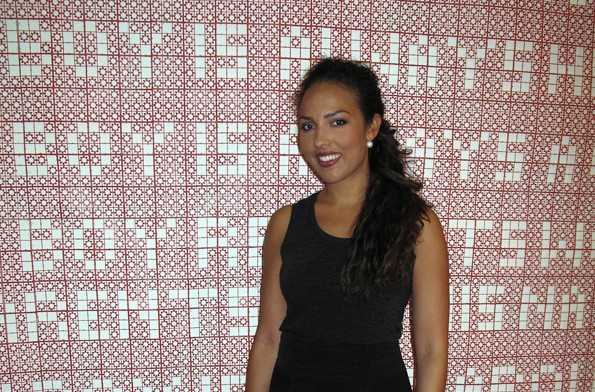