With sales registering from the moment it opened its doors on March 12, the Art Basel Hong Kong fair is emerging as a magnet, a must-see and be-seen destination in the global art world. Now in its third edition, the huge fair, which ended March 17, hosted 233 galleries from 37 countries. But for the first time, Asian buyers seemed open to a wide range of work from Europe and the United States while foreign visitors spent time learning more about artists from throughout the Far East, Southeast Asia and even the Middle East. It was certainly the place where works by Damien Hirst, Tracy Emin and even, Aaron Curry were as much at home as those by Mariko Mori, Xu Bing and Zhang Huan.

The Art Basel organization has been holding its elegant art fair in Basel, Switzerland since 1970 and its buzzy, busy Miami offshoot since 2002. Three years ago, Art Basel acquired the Hong Kong Art Fair, which while popular, lacked the cache and pull of an international brand. This year, the fair HK moved to March to avoid collisions with other international art events, allowing more galleries to participate, including first-timer New York players Andrea Rosen and Skarstedt.

“I think this is the most interesting of any of the fairs,” said Pace President Arne Glimcher, who was beaming with pride over the demand for Yoshitomo Nara, featured both in the Pace booth and at the gallery’s newish outpost in Hong Kong as well as in a solo exhibition at Hong Kong’s Asia Society. Indeed, it was a Nara feeding frenzy—both canvases and prints sold out the first night—even though Glimcher said they specifically aimed to place the works in Asian collections to raise the artist’s visibility on his home turf. David Zwirner, on the other hand, was proving that western painters could find buyers in Hong Kong—a situation that didn’t seem likely just two years ago—selling a stunning Chris Ofili for $2 million and a large scale painting by Neo Rauch for $1 million. Hauser and Wirth also did surprisingly well with Polish artist Jakub Julian Zolkowski, with a sale to a Shanghai collector for $165,000.

The most crowded booth had to be Gagosian Gallery’s, packed like a subway car from the very start of the fair as visitors jostled to snap selfies beside Nam June Paik’s Golden Buddha, 2005, an installation of a Buddha figurine staring at its own reflection on a video screen. White Cube was also akin to a photo booth, especially around a miniature in a vitrine of a troupe of Klu Klux Klan figures on a raft in the middle of a glassy sea, by Jake and Dinos Chapman.

But this is really a fair to discover new talents, such as Cambodian artist Leang Seckon at Rossi and Rossi’s booth. He has had two solo shows at the London gallery and his blend of surrealism, personal confession and social commentary found an international array of buyers, especially since the works were priced reasonably ranging from $4,000 for a small collage to $24,000 for a large-scale painting. “He is connecting with buyers from the U.S., Asia, Australia and Europe yet he is truly Cambodian,” said gallerist Mauro Ribero.   Likewise, Hong Kong’s AM Space was featuring newcomer Samson Yang, who rigged the booth as a radio station, transmitting a sound track of war explosions as the artist drummed on various objects laid out on a table.

Fair newcomer Eleven Rivington of New York devoted their booth to abstractions by Mika Tajima, many of which sold for between $14,000 and $30,000.   “It just feels like there’s so much potential here,” said gallery director Augusto Arbizo. “It’s not like other fairs where you know everyone. Here, everyone you are meeting is new.”

At James Cohan Shanghai, you could find a lovely monochrome meditative painting by Chinese female artist Shi Zhiying for $38,000 and paintings by Hangzhou artist Chen Yujian, who currently has a solo show at the gallery, for $50,000. Gallery director Arthur Solway has been particularly strong at introducing a few Chinese artists to his roster while bringing the likes of Francesco Clemente and Yinka Shonibare to Chinese audiences.

“With a short preview evening lasting only three hours, we definitely felt more urgency—and we are selling to more mainlanders,” said Solway, who has been one of the more driven people working to break into the once insulted set of Chinese art buyers The gallery recently sold a work by Nam June Paik from the current show in New York to the M+ Museum..

Sean Kelly is another dealer who has spent time cultivating Asian buyers and is now apparently reaping the rewards. His new art star, Sun Xun, had his first solo show in New York this past December. The gallery sold a large mural-sized painting for $145,000 and one of the artist’s monumental books to Hong Kong collector Adrian Cheng for $135,000.

The fair ostensibly maintains a 50-50 balance between Asian and western galleries, but with more dealers such as Gagosian, Pace, White Cube, Emmanuel Perrotin and Lehmann Maupin opening in Hong Kong and thereby counting as “Asian galleries”, the balance may be tipping slightly more in favor of western art.   At the same time, New York galleries have added Asian artists to their roster demonstrating that it is increasingly difficult to maintain a firm East-West divide.

“We are really committed to keeping the Asian DNA of the fair,” said David Maupin who is on the gallery selection committee. With a 94% reapplication rate, he said, it is getting tougher to get into the fair, leading some Chinese galleries to grumble about being unfairly underrepresented. “We have a very stringent process,” said Emi Eu of STPI (Singapore Tyler Print Institute) who is on the selection committee, adding that selectivity “pushes galleries to do great programs.”

Meanwhile, Chinese galleries who made the cut were very happy. Meg Maggio of Pekin Fine Art, with galleries in Beijing and Hong Kong noted her success with Chen Shaoxiong, who covered her booth with delicate ink-and brush paintings of protest scenes. His work is currently showing at the Ullens Center for Contemporary Art in Beijing and was recently acquired by the Seattle Art Museum, accompanied by a set of watercolors used in a video, for approximately 100,000 euros. Asia Society acquired his work as well.

Shanghai gallerist Leo Xu barely had time to talk as he was immersed in conversation with Pauline Yao, a curator at M+, who seemed keenly interested in an installation by Liu Chuang, previously shown at New Museum’s “Younger Than Jesus Triennial” for approximately $30,000.

“The Basel brand deepens trust with new clients,” commented Lu Jingjing of Beijing Commune, who represents such up-and-coming artists as Ma Qiusha, Liang Yuanwei, and Hu Xiaoyuan, all women emerging in the top ranks of China’s new generation of artists.   For Lu, the goal is not to bring more Asian galleries to Art Basel Hong Kong, but to, eventually, bring more Asian galleries to the other Art Basel fairs. 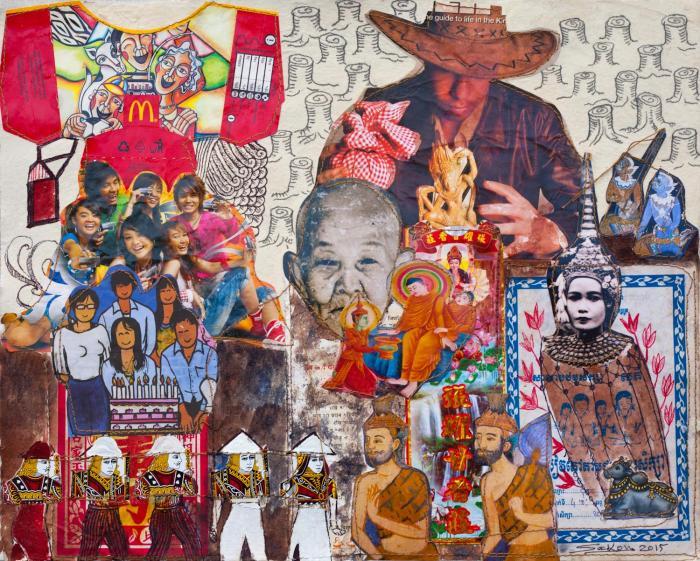