TRENTON — Democratic leaders in the Assembly and a handful of grassroots advocates joined forces today to call on Gov. Chris Christie to pass a package of bills aimed at making more accurate and transparent the state’s budget process — while at the same time slamming the Republican for failing to uphold the promise of “fiscal reform” he made upon entering office in 2011.

Speaking at a morning press conference in the statehouse, Assembly Speaker Vinnie Prieto (D-32) and Gary Shaer (D-36) stood with other members of the legislature’s lower chamber to unpackage the details of the legislation, which includes four individuals bills they hope will have a many-fold effect on the way the state conducts its budgeting and spending: partly by improving its standing with creditors, partly by avoiding more overly optimistic revenue projections and budget shortfalls, and generally by increasing the predictability, transparency, and long-term planning of the process as a whole.

And while proponents of the legislation said it would ensure safe and effective budget practices no matter who is in the governor’s office, they did hone in on Christie in particular, whose own budget practices throughout his term, they argued, have served as an example of why the issue now must be addressed.

“When you look at the way state’s do their planning according to a very recent study, New Jersey ranks 47,” said Gordon MacInnes, president of the advocacy group NJ Policy Perspective. “Only Oklahoma and South Dakota are worse at looking ahead to see what needs to be accommodated, what obligations need to be met, and what’s the reasonable revenue stream. So this package of legislation, while it doesn’t deal with something exciting to most people, it is crucial to having orderly and predictive management of the state’s finances.”

The legislation, sponsored by Prieto, Schaer, and others, would establish in part a joint executive and legislative advisory board to more “reliably” forecast revenues (A4326). It would also require the governor to provide details for any significant revenue measures in his or her initial budget address (A3311), require a biannual audit of state tax expenditures (A660), and impose new disclosure requirements on the State Economic Development Authority (A939).

MacInnes and other speakers argued that inaccurate revenue forecasting and other poor budgeting practices have “exacerbated” the state’s revenue crisis, ultimately contributing to a record eight credit downgradings since Christie took office in January 2011. Christie has used those revenue projections to make the case for greater cuts to the state’s pension benefit system, which is now widely considered to be in crisis mode with some $80 billion in unfunded liabilities.

Christie’s proposed $33.8 billion budget for fiscal year 2016, which he unveiled on the Assembly floor, projects relatively modest growth when compared with his previous budgets —  less than 4 percent.

“I want to thank the leadership, they do a fine job making sure we do the right thing with the budget, but I do have to point out they are far more diplomatic than I would be,” said Assemblyman Tim Eustace (D-38). “They talk about realistic fiscal responsibility, and I think this is more real fiscal responsibility.”

It’s unclear — probably unlikely — that Christie would go for such reforms. Republicans in the Assembly where the bills have already passed through multiple committees have for the most part opposed the legislation, pointing instead to the bigger problem of increased spending and taxing of New Jersey residents in recent years.

But Democrats still say that reform is long overdue — and highlighted the Christie of 2011, who took the oath of office declaring that “change has come to Trenton,” as the central reason why the Republican ought to now sign the bills.

“I’d like to remind folks that when the governor came to office, he said he was going to bring in a new era of fiscal responsibility and transparency. and so far what he’s done is the exact opposite,” said Analilia Mejia, executive director of NJ Working Families. “So as to ..  why would Christie sign this legislation, well it’s in line with what he professed to the state he was about.”

Mejia, in a somewhat fiery charge, also laid into Christie over his recent maneuverings at the national level, where he’s work in recent weeks to lay the groundwork of a 2016 presidential campaign.

“Second, I know that we’re in New Jersey. But the governor I would say is sometimes — well, obviously he’s sometimes not in New Jersey, and he’s playing to offices outside our state. If he is positioning himself as a ‘leader’, and this idea that ‘leadership matters’, then when it comes to fiscal responsibility, when it comes to making sure our state is on a good trajectory, and not on the road toward other credit downgrades, than this is the right thing to do,” Mejia said.

“Well I think if you look at them, the bills codify certain things, and I think these would be the right things to do in the name of transparency. When he came into office, he said he was going to turn Trenton upside down — this should be part of it,” he said.

The conference was organized by Better Choices for New Jersey, a statewide “coalition of over 60 organizations dedicated to protecting essential services and public investments that lead to broadly shared prosperity.” 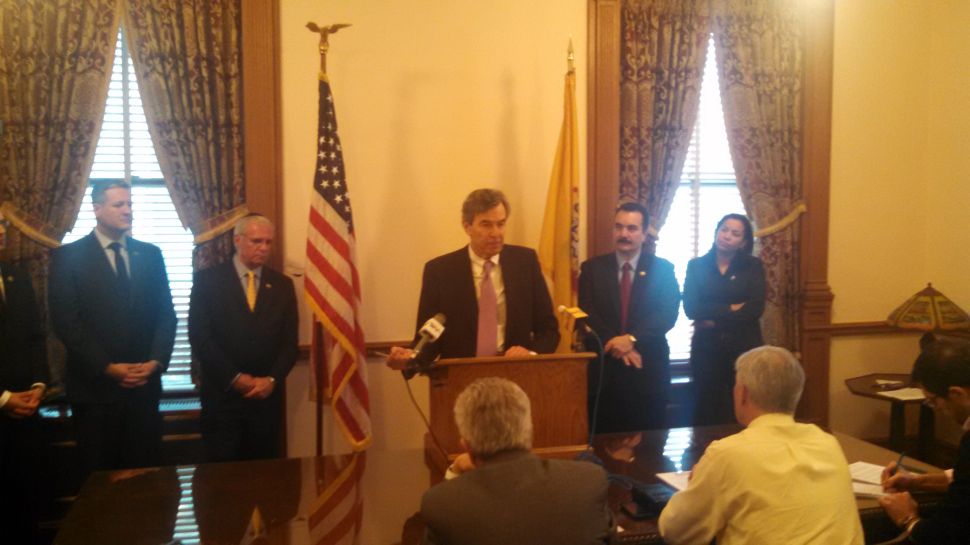