KENILWORTH – Standing in the rain outside of Harding Elementary School on the Boulevard in Kenilworth, a woman in a Smurf-blue velour track suit squinted at the entrance, then asked a question many people waiting in the chilly spring rain couldn’t immediately answer.

“Is Chris Christie here? Is the governor inside?” said the woman in her late thirties, who declined to give her name. “Because even though my daughter goes to school here, I can’t get inside to ask any questions. I don’t know why they didn’t hold this at the high school, which is much bigger. Then again, this is New Jersey. Why should anything make sense?”

About 40 people outside of the school where Christie held his 133rd town hall on Thursday tried to make sense of an event where many people who claimed to have reservations were turned away, including local mothers, students from nearby Rutgers-Newark and members of the New Jersey press corps, with local officials claiming the school gym was filled to a capacity reported to be anywhere from 250 to 400 people.

Different groups of people trying and failing to go to the event improvised they best they could, turning the town hall into a town sidewalk of alfresco democracy in action.

Some protested Christie’s recent decision to sign onto an amicus brief calling on the federal courts to prevent the Obama administration from enacting new rules designed to defer deportations for millions of undocumented immigrants nationally, despite the possibility that the president’s executive order could help many in New Jersey’s Latino community, one of the nation’s largest.

“When he signed that brief, he wasn’t thinking about good policy for New Jersey,” said Johanna Calle, program coordinator of the New Jersey Alliance for Immigrant Justice, which is supported by unions, the American Civil Liberties Union and other groups. “He was thinking about a policy platform that would help him run for President.”

“You can’t fund a pension, which you are legally obligated to do,” said Bonacchi, 35, a middle-school Italian teacher. “I really would’ve liked the opportunity to ask [Governor] Christie that question. There are a lot of teachers in this town, and people took positions as teachers for the right reasons and played by the rules, now they’re charging the rules mid-game. I paid into my pension. I did my part. And now I feel let down.”

Perhaps the person most let down outside of the governor’s town hall event was Cheryl Bullock, of Plainfield, who showed an hour in advance of the scheduled start time and was told that she could not be let in. Her group: Plainfield members of the Union County Republican Committee.

This type of lack of attention to local detail is something Bullock fears is happening a lot these days regarding the Christie administration while the Republican governor continues pondering a presidential run.

“It’s becoming a very expensive state, and people are leaving. What is the governor going to do to make it more cost-effective for people to stay here in New Jersey?” Bullock asked outside, unable to ask inside. “I definitely think that you can’t concentrate on New Jersey when you’re traveling all over. Everybody wants to know that their voices are being heard. A lot of people feel that their voices aren’t being heard.” 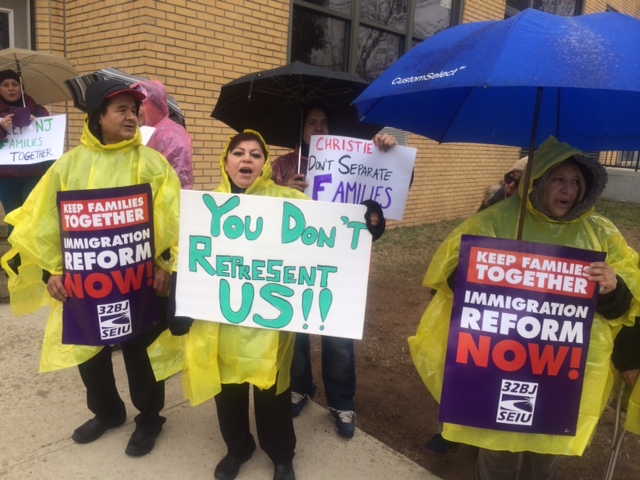