Brooklyn Councilman Brad Lander today marshaled his troops ahead of what is being called the ‘Battle of Bag-dad‘—the fight to pass a measure that would obligate store owners to charge customers a 10-cent fee for plastic carryout bags.

Drawing a handful of his Council colleagues, a host of environment advocates and a dozen or so grade-school children onto the steps of City Hall, Mr. Lander made his case to pass the bill—which he said remains a few votes short of the 26 needed to reach Mayor Bill de Blasio’s desk—by Earth Day on April 22.

“A fee on single-use paper and plastic disposable bags is the right way to reduce plastic bag waste in New York City,” he maintained.

Mr. Lander—one of the leading figures in the Council’s dominant Progressive Caucus—and his allies highlighted that New Yorkers use 9 billion plastic grocery bags a year, and that the sacks clutter parks, cling to trees, accrue into islands in the world’s oceans, strangle marine life and cost the city some $12.5 million to dispose of annually. He led chants of “bag fees by Earth Day,” and cited testimony from recycling companies that the pouches cannot be reprocessed, contrary to claims by industry groups like the Progressive Bag Alliance.

The left-leaning Park Slope pol also denied allegations from electeds like Staten Island State Senator Diane Savino that the fee is a “limousine liberal” initiative, and trotted out residents of New York City Housing developments and low-income children as evidence.

“We know that people in our public housing developments and in our communities all around the city want to live in a clean city, don’t want to see garbage all over their streets, and whatever their neighborhood, whatever their income, can bring a reusable bag and help end the scourge of bag waste,” he said.

The proposal has yet to clear the Committee on Sanitation despite having the support of its chairman, Brooklyn Councilman Antonio Reynoso, who attended today’s event. Mr. Lander refused to describe to reporters his discussions about the bill with Council Speaker Melissa Mark-Viverito or Mayor Bill de Blasio.

“So I’m not going to characterize my conversations with them of this bill. As I say, we are here today to express our desire and our hope that they’ll both sign on by Earth Day,” he said. “They are both strong supporters of the environment and our communities.”

The measure faces strong opposition from more conservative-leaning outer borough Democrats and from the three-member Republican conference, as well as from fellow Brooklyn Councilman Rafael Espinal, whose district contains warehouses that ship and store bags and employ his constituents.

Opponents have called the fee a “tax,” a term Mr. Lander has rejected because store owners—not the city—would pocket the dime. 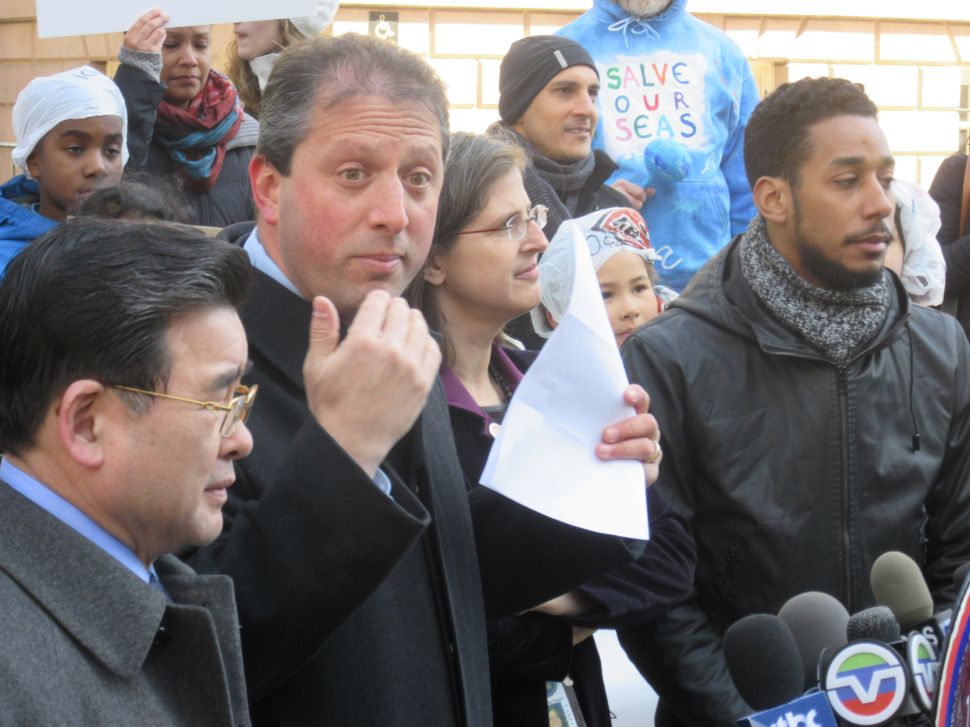