We spoke to Bates Motel Executive Producers Carlton Cuse and Kerry Ehrin, as well as Norman and Norma Bates, er, Freddie Highmore and Vera Farmiga, to get the lowdown on the things fans want to know about Season 3….and beyond.

The Norman Bates character is so iconic; how have you made this character your own?

Freddie Highmore (Norman): I’ve re-watched Psycho before every season and in some ways tried implementing what Anthony Perkins brought to the role, especially as the show continues. But certainly, I don’t think any of us feel tied to or constrained by [the original] Psycho or to any performance that came before.

How is the dynamic between Norma and Norman going to change this season?

Vera Farmiga (Norma): I think following the events of last season, Norma is more aware, she’s more circumspect, she’s more attentive to Norman’s fragility. I think you’re going to see her playing her cards really close to her chest in the beginning of the season but she’s got to reach out. I think she’s at a point where she’s as protective of him as ever and determined to help him as best as she can, but she doesn’t always know how. And I think she’s going to start reaching out to others.

Highmore: There’s this struggle for power between Norma and Norman in their relationship that will start to become ever more important. And whereas Norman has always been very much the son or the younger person in the relationship before, that dynamic is starting to shift. But I don’t think that will stay that way. Norman will seek to take more and more of a control in their relationship and become the person who’s more dominant by the end of the season. And I think that’s interesting. He’s become slightly more manipulative and capable of toying with Norma and using his knowledge about what he’s capable of to gain things from her.

How do you make Norman so bad and yet so sympathetic at the same time?

Kerry Ehrin (EP): If you’re going to take on a bad guy, you have to get inside of them and feel the world through them and no one, you know, wakes up in the morning and says, “Hey, I’m a bad guy. I’m going to go out today and do bad things.” Everyone wakes up in the morning and lies to themselves, so Norman is no different. And, you know, he’s been through a lot. He’s been through a lot that people would have sympathy for, empathy for. And, he’s very endearing because he always tries to do the best that he can and I think that we love him for that. He doesn’t want to be a bad guy.

Highmore: I feel it was especially important to set Norman up in the first two seasons as someone we supported and whose side we were so as now we can start to, start to make us challenge whether we were right to get on his side and to start supporting him in the first place.

Carlton Cuse (EP): This season Norman starts to slide much more significantly into that character [that we know he’ll become in the end]. He becomes less able to kind of modulate or be conscious of his decline and that causes really serious consequences in his relationship with his mom. And, you know, I think we explore that in a lot of different ways and that’s really the journey of the season.

What were your biggest challenges this season?

Highmore: I think as Norman changes over time, one of the biggest challenges becomes not replaying beats that we’ve already played in the past. Or if you tackle the same subject, retelling it or acting it out in a different way. So that the third season has been really interesting because of how Norman changes. Scenes in which you have kind of learned how to resolve in past, you can’t use, you can’t get out of it with the same emotion. And so you know that in certain scenes in the past with Norma and Norman where Norma was on the winning side of the argument, and so the trick this season for Norman was to find a way in which he can start to change that. And gradually, bit by bit, in every scene between Norma and Norman, we make this small shift.

Cuse: Wow. That’s a good question. I think that we work hard on the kind of the crime story aspect of the show. The show for us is just a cocktail of super-nuance, the character writing combined with this intentionally pulpy crime drama, and so getting that right is something that is really hard to do.

Farmiga: It’s pretty nutty to see now what we explore with this character this season like the height of righteousness that she possesses and the depths of manipulation and depravity that she’s capable of. And there are just so many antics and adventures for me to explore. I have never been challenged the way I am with this story in this particular character. And even as we speak, I’m heavily medicated right now with tremors and spasms and a torn shoulder and neck muscles and the like. I am broken in smithereens.

Ehrin:  Honestly, the biggest challenge is not literally killing Vera and Freddie. We ask so much of them. The storylines we do tend to be very emotional while still grounded, but that is such a feat to pull off for an actor and they’re truly amazing, the performances that they do every day. We just marvel at them in editing or if we’re on the set. It really is a tall order and we’re incredibly grateful to have such amazing talent to do it. But honestly that is the biggest worry is, you know, are we all going to survive this season physically?

How do you feel about people binge-watching the show?

Farmiga: I would like [all of the episodes] to be available on Netflix immediately because I think technology and culture has shifted the way we watch our stories. People want to binge-watch. People want to catch up on their own time and in, you know, in their own convenience and…not have to kind of wade through the commercials to do it. So I just wish actually it was available [now].

Is there a finite end to Bates Motel in sight?

Cuse: Yes, [it will be] five seasons. Kerry and I have a pretty clear roadmap. We’re just finishing the third season right now and, you know, we feel pretty strongly that there’s two more seasons in the show and we have a pretty clear plan of where we want to go and we want to bring this story to its inevitable conclusion. I think Bates is not its best version if it’s an open-ended series and I think the audience is sort of waiting for the conclusion and we’re heading there. We have that mapped out.

What’s there going to be more of this season—murders, drugs or sex?

Ehrin: If you look at Psycho, it’s like we’re telling the prequel of that and the story of someone sinking into insanity is—if you put it on a graph, it has to get more and more intense and crazy and weird as they sink further into it. So yes, we’re definitely getting into a very meaty part of the storytelling. And, you know, it’s a very exciting part of the storytelling.

Farmiga: I agree. I think they’re equal measures of sex, drugs and rock and roll. There’s wicked bombshells thrown this year. There’s some pretty rude awakenings to be had. There’s some flabbergasting shake-ups. I can’t tell you what they are, but yes, there’s going to be some extermination, some butchery, some crazy absurdity. Yes! 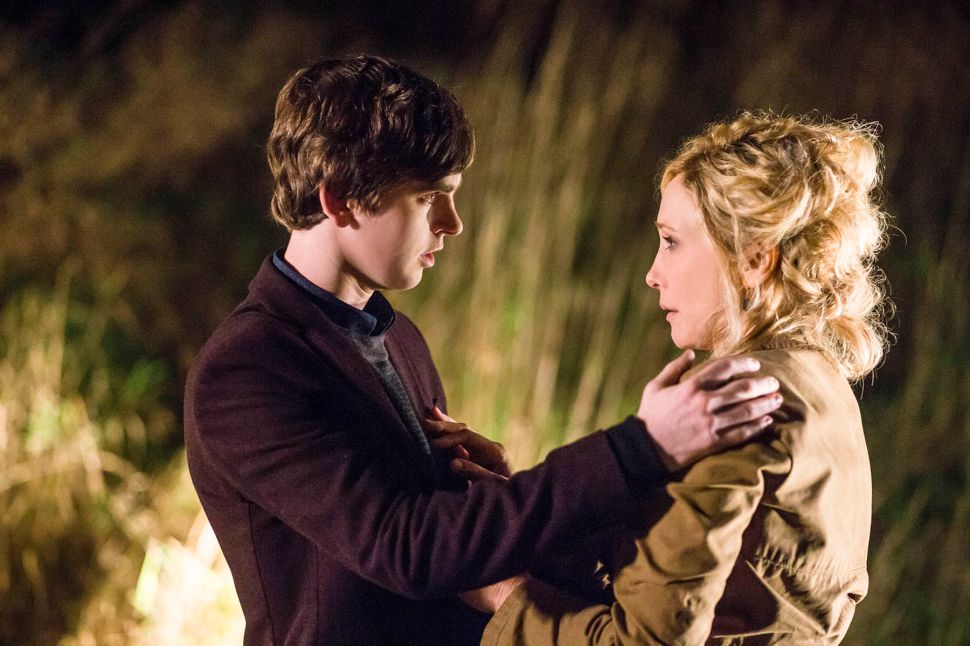