Unbreakable, they alive, dammit! Oh, wait no, no, so many people are dead already in Bates Motel season three. Apologies.

In “Unbreak-Able” we learn that Annika Johnson, the hooker with the heart full of gold and the stomach full of bullets, is dead fo sho, a fact that Norma tries to hide from Norman when he sees all the hullabaloo outside the motel. But a dead body under a sheet is a dead body under a sheet, and Norman makes one of his dazed Norman faces and and has to be led away from the crime scene, a fact duly noted by Sheriff Romero. “What was wrong with him? You mean the fact that he had a natural human reaction to someone dying in our driveway?” Norma asks Romero, which okay yeah, fair, but also we know and Romero probably knows that the natural Norman reaction is 95% more stabby than the natural human reaction.

And with that, the mystery of the dead prostitutes is on, and things get real Carlton Cuse-y. And by that I mean things get Lost-y. And by that, I mean there’s a mysterious secret society and an uncrackable flash drive to crack.

First, the flash drive. Norma tries to access the falsh drive Annika gave to her right before she died, but it’s password protected. Best moment of this season, no, this show yet is when Norma enters in “SEXCRAZED” as a possible password. I wanted so badly for the computer to be like “Yes, nailed it. Access granted.” SEXCRAZED is now my password for everything. Everything.

But alas, it is not the password for the flash drive. Nor is anything else Norma tries, so she takes the natural route of asking a random dude in a coffee shop to break in, mumbling an excuse about her grandmother hiding some files. Random Coffee Shop Hacker #1 is up to give it a whirl, but can’t get past the flash drive’s protection, asking her “your grandma did this?” So strike number two for Norma, but that random coffee shop dude has such a funny story to tell about his day, with some crazy lady and a computer genius grandmother. How fun for him.

For some reason, Norma entrusts the secret of the flash drive to no one but Dylan, a fact that does not sit well with Norman. Well, Norman doesn’t know exactly what is going on, but he knows there’s a lot of secret whispering going on and he is not a fan of secret whispering. Honestly though, when you have a son that skulks around in the dark as much as Norman, you need to keep your secret whispering quieter.

And Norman’s not the only one who wants to know more about the flash drive — Dylan finds two sketchy dudes searching through the motel office, saying the motel has “something that belongs to them.” Now, I assume they mean the flash drive, but I hope it’s like swerve “these are our drapes and we want them back.” But no, it’s probably the flash drive. Sketchy dudes threaten Dylan with a gun, nonchalantly pointing out that Dylan can’t be at the motel all the time.

You know who is at the motel basically all the time? Emma. Poor, sweet Emma, who has had enough with all you crazy people and would just kindly like to have sex please. Can someone take some time out of the flash drives and the dead prostitutes and have sex with Emma please? Some might even call her…sexcrazed. No? I’m the only one still hung up on that. Fair. That’s fair.

Early on this episode, Norma walks in on Norman preparing a picnic. She so sweetly assumes that Norman is planning a mother-son picnic, but it’s actually for Emma. Norma, naturally, takes this option to forbade Norman from ever sleeping with Emma, mostly because there’s a chance he hurts her but probably a little because she feels jilted. Norma fucking loves picnics. Norman loves blackout sex and hurting women. Who will be victorious?

On the picnic itself, things aren’t going well because Norman and Emma choose to have it in the freezing cold forest. They do come across an abandoned cabin, the perfect place to warm up and ruminate on the one’s mortality. Emma doesn’t want to talk about death, though, because again Emma is the only normal person on this entire show, but Norman shuts down her advances yet again. Mother said no sex, so there ain’t gonna’ be sex. “I didn’t think your mother was coming with us on this date,” Emma says, before storming off.

So she’s pissed. Norman’s pissed. Those sketchy dudes are pissed, and Norma’s scared so she asks Dylan to hide the flash drive out on the pot farm. Caleb nearly catches him, but that just turns into a genuine heart to heart between son and father/uncle. It’s a moment that’s almost too good to be true, because it is. Norman, still seething from mother issues and, presumably, blue balls, followed Dylan out into the woods. Norman is none too pleased to find Dylan harboring his mother’s rapist.

Honestly, though, this scene was genuinely chilling, and I must admit that Max Thieriot, someone who through these four episodes I haven’t been a huge fan of, was a big part of it. Freddie Highmore and his wondrously creepy face helped too, but that was a given.

In the end, Norman drives off into the rain, with the knowledge that Caleb is in town and the power to drive a wedge between Norma and Dylan, something Norman does to all those who get close to mother. 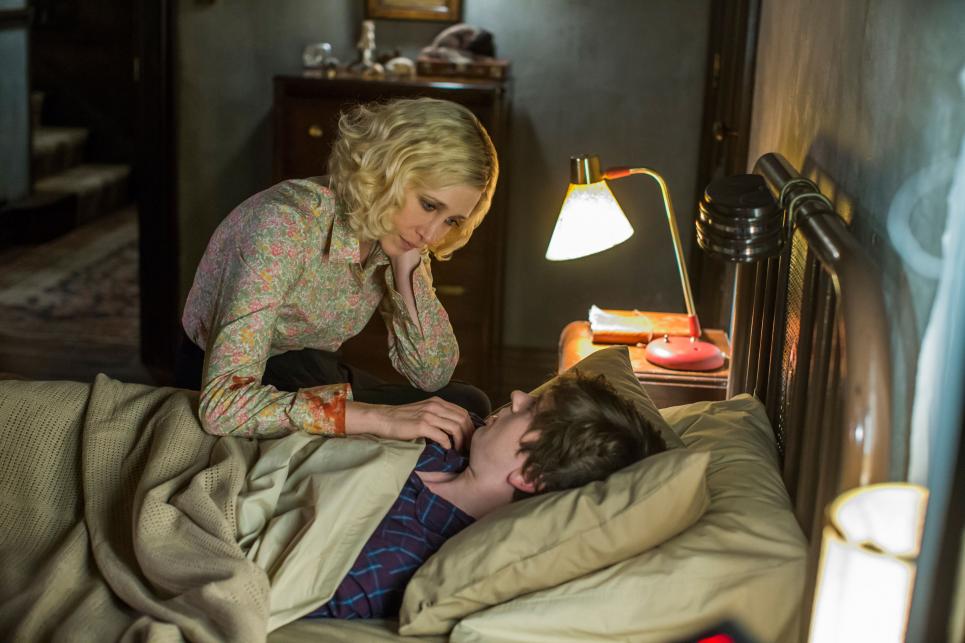