After Papa Rayburn’s death, the family continues doing what they do best, pretending everything is fine. And if Detective Potts never gave Danny those interview tapes from 30 years ago, everything might’ve been fine. With the culprit of all the Rayburn drama now dead, a huge weight has been lifted off everyone’s shoulders. Bonded by this somewhat shameful feeling, the siblings flourish in this new stage of life. But because of Danny, this spurt of happiness is short lived.

John vaults into hardcore detective mode trying to solve his Jane Doe case. Chasing down leads, strangling criminals up against a wall, it’s fun seeing him be a badass cop.

Kevin leverages every penny he has towards buying the property on the docks, desperate in his passion to keep his hometown a “local place, for local folks.” After stalking his ex-wife’s True Harmony profile, he does the mature thing and decides not to crash Belle’s date. For the first time, I feel compassion towards my least favorite Rayburn.

Meg tries her hand at criminal law, agreeing to help out Carlos, the brother of the inn’s valet, Manny. Even Sally gets involved, offering to be a character witness. Thriving in a new field, Meg, after many bumps in the road, also finally gets engaged to Marco. Everyone is excited by this news. At last, a reason to celebrate! Then the camera pans to Danny, sneering at Meg from the corner.

Danny spends his evenings hiding away in his truck, listening to those interrogation tapes on repeat. Hearing each sibling lie to the police about how Danny got hit by a drunk driver, instead of getting pummeled by his father. “I’ve never seen anyone get hurt that bad” flashback Kevin, says.  He listens to tiny flashback Meg, who was too young to even remember these interrogations taking place, say, “He killed my sister.” The cop asks Meg who told her that, since she didn’t see the incidence happen, and she answers, “John.”

The hurt is deep in Danny’s eyes, as he realizes the only people he thought he could trust, actually never had his back. I must note that the offbeat performance by Mendelsohn is impressive. I can’t imagine him not being exactly like Danny in real life, with that drunken stance, and deliberate slow speech, his acting is so uniquely detailed.

Unsure of how to deal with all this new information, Danny’s first stop is to buy blow from partner-in-crime, Erik, and declare his desire be left alone. When a drug dealer says, “That’s a lot of powder for a party of one,” you know things are about to get wild.

Danny flees to Key West for an epic bender. Showing up at a beach rave with his shaggy hair, Charlie Sheen bowling shirt, lost countenance, and at least 15 years on all the partygoers, I feel embarrassed for him. I want to jump through my TV and take him home to Erik and Chelsea’s house, the only place he seems to fit in.

A hot young couple seduces Danny into sharing his drugs, and not surprisingly, blue-ball him after getting sufficiently faded. Danny then makes his way to a nearby bar, picking a fight with an ogre-sized man in a “NAVY” shirt (his Dad was also in the Navy). The ogre bites and with a mere few punches, leaves Danny wincing on the floor in pain, his journey to total self-degradation almost complete.

Stumbling out of the bar, Danny sees Chelsea pulling up. Hooray! Because this downward spiral is hard to watch. After getting a distress call from the bartender, she drove all the way out to pick up his sorry looking ass, and how does he respond? He tells her off, way too deep in his own pity party to be revived.

Danny hitchhikes and finds himself at the most creepy after-after-party. In what we later find out is a fake-out crack induced dream, we see the cops bust into the motel room, as John pulls him away from the crowd, yelling, “If anyone finds out about this,”- “I know, I know, “Danny interrupts. “It will reflect bad on the family.” Confronting his brother about the tapes, John says, “We didn’t lie for Dad. We lied for you.” Explaining how if the police kept digging into the abuse claim, they would also find out that Danny is responsible for Sarah’s death. Pulling a gun on John, the adult ghost version of Sarah (I knew it!) suddenly appears, and whispers into Danny’s ear, “It’s time to decide. Is it you or is it them?”

Pointing the gun towards his head, Danny pulls the trigger, and suddenly comes to. Normally, I’m not a fan of trick scenes, but this was a creative way to let the audience get inside Danny’s mind, to feel his guilt and frustration.

Back to real life, and back to the seaside dock of the inn, John approaches Danny about the tapes. Sincerely apologizing, John says what Dad did was wrong, that “We were all fucking wrong. And now that Dad’s gone, I’d like to start over.” Without missing a beat, Danny accepts. “Yeah. It’s past.”

However, the smile on Danny’s face fades into a grimace the moment John walks away. Danny’s drug dream was a turning point. He thought about Hallucination Sarah’s question, and chose himself. Zooming in on the fish Danny is cleaning, “Part 6” ends as he viciously chops off its head. Ruh-roh. Here comes the maleficent Danny everyone feared.

His plan of revenge, to take down each of his siblings, is already in motion. After too easily accepting Kevin’s apology for getting drunk and sleeping with Chelsea, Danny sends Erik to break into his office/makeshift bachelor pad, whom beats him to pulp with a baseball bat. So that’s how the window we keep seeing in the flash-forwards got smashed. Kevin can’t report the incidence to the police in fear he will lose his bank loan, even though that eventually happens, anyways. With a few broken ribs, a failed marriage, and no money, Kevin moves back home, where Sally tells him he can stay as long as he wants.

Speaking of our delicate matriarch, we get a glimpse of her flashbacks, showing how she almost fled and left the family during the time of Sarah’s death. Sharing a joint with Danny, Sally reminisces of the time she and Robert met. She says she didn’t even tell her family that she was getting married, and cried the entire way down. Er- what? “It what you do, when you feel you have no choice,” she says. “You run away.” There’s definitely more to naïve Sally than we thought.

Danny, on a dire mission to pay back whomever he owes money to, takes a risky initiative seeking out the man who’s in charge of all the gasoline jobs, Wayne Lowry, and convinces him that they should do business together. Disguising cocaine imports through the new fish vendor, and using the inn’s vans for exporting, Danny reels in tons of cash, simultaneously ensuring inevitable destruction of the entire family business.

Now, seriously threatening Meg that he’ll tell Marco about her affair if she doesn’t fix the will, Danny also tries to form a wedge between John and his wife, Diana. “There’s something off about Danny. You don’t see him clearly,” Diana, confides to John, after Danny strangely whispers secrets in their daughter’s ear before her date, and gets John drunk, shoving a random girl’s number in his pocket. Diana’s suspicions rightfully grow, prompting John to figure what he’s been up to during the years he was gone.

John discovers Danny had earned a criminal record for selling prescription drugs, and drives to Miami to find out more information from Beth Mackey, the woman who posted his bail. “You guys don’t look anything alike,” is the first thing out of Beth’s mouth. THANK YOU, BETH. This whole series I’ve been thinking how little these four Rayburn kids resemble each other, waiting for a flashback of an affair, or an adoption, to explain such cosmetic differences.

John then heads to Danny’s old apartment, discovering piles of letters, all of them full of cash sent from Danny, himself. You can see the wheels in John’s brain churning, and we know he’ll soon connect all the dots. In the voice-over narration that is still not necessary, John says, “Danny turned us into the family you don’t wanna be. He made a big mistake, and now we’re all paying for it.”

There won’t be enough pills to regulate John’s blood pressure once he finds out what Danny’s been doing right under his nose, and how it’s connected to his case. And I can’t wait for this moment. Watching Kyle Chandler unleash the fury will be the highlight of this series. 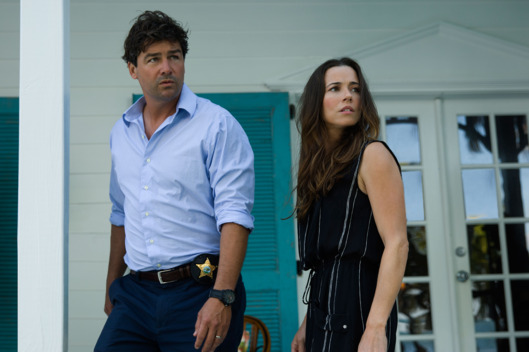