As the Rayburns watch the local Florida news, they grumble, yell at the TV, “We know it’s hot!” sweating from the humidity, and rolling their eyes. Hearing someone needlessly state the obvious is frustrating, and I share this emotion every time the voice-over narration begins on Bloodline. Even though I love Kyle Chandler’s slight twang, we don’t need to hear his character, John Rayburn, say, “My brother, Kevin, is the hot head of the family, always letting his emotions get the better of him,” as we zoom in through a fist-punched broken window, and a trashed apartment with lines of cocaine on the table. Or precede “Part 3” (episodes are called “Parts” just like House of Cards named them “Chapters”) with, “My sister is a good person. She takes care of people. She wants everyone to be happy.” Yes, we know. Meg (Linda Cardellini) exudes that in almost every scene.

The redundancy is bothersome for two reasons. First, it feels like the writers don’t trust us an audience. Second, Bloodline has an incredibly talented cast in which these things are clearly conveyed through their fine-tuned performances. It’s almost as if they forgot the show is being streamed through Netflix. Nobody is waiting an entire to week to watch the next episode. We’re binging these goods. Constant recaps articulated in forced clichés aren’t (ever) necessary.

However, the narration disappears in “Part 4” and the show gets infinitely better. Boldly taking a Game of Throne’s “no one is safe” approach in the first few minutes of “Part 5,” I actually gasped out loud. Bloodline is finally coming alive, turning into the captivating family drama I was hoping it would be.

You just have to endure the first few episodes, which feel like a long drawn-out game of telephone. One by one each Rayburn family member finds out who wanted or didn’t want Danny (Ben Mendelsohn) to stay, and each confrontation is tedious to watch, since we already know all this information.

It’s fascinating how nearly every conversation between the Rayburns happens in person. I’ll call a friend who lives to five minutes away to talk, but this family is old school. They drop-by to chat, or in some cases, to blackmail, as Danny nearly does to Meg when he simultaneously realizes she’s having an affair and the he might’ve been cut out of Dad’s will. He admits to Meg that he would never tell her boyfriend, Marco, but that she should be more careful. “I don’t judge,” he says. “I got your back, sister. I just hope you got mine.” But knowing she will do anything for Dad, Danny drives right into the solar plexus of Meg’s issues, adding, “You’ll never please him, because you’re not her. Dad hated me, but I at lease got attention.”

Each episode begins from the moment the prior one ended, and “Part 2” opens with Danny skipping his bus out of town, and crashing at his no-good buddy, Erik O’Bannon’s (Jamie McShane) house. Danny needs money and agrees to help out with whatever shady business Erik is involved with, people Erik poignantly describes as, “The guys who coined the term you don’t fuck with these guys.” Lovely.

We meet Erik’s sister, Chelsea (Chloë Sevigny), a sassy, butt-flashing, breath of fresh air, from the prim and proper Rayburn ladies. “Haven’t you learned to stay away from my brother?” Chelsea, teases Danny. She may be white trailer trash, but she’s also a smart, loyal and good-hearted person. The chemistry between Danny and Chelsea is palpable. Together, they transform into immature happy teenagers, clearly perfect for each other, which is why it’s so upsetting that when things get a touch complicated, Danny bails.

However, Danny’s got a lot on his plate. Before stealing a boat and transferring tanks of gas for god knows whom with Erik, he visits his Dad to say a final goodbye, hoping to leave on good terms.

All of sudden we’re in the hospital. Robert is in intensive care for severe head trauma and Danny is in an arm sling. Uhm. What just happened? At first I thought this was a flash-forward scene, but when Sally, (Sissy Spacek) asks, “Will he be okay for the ceremony?” I realize it’s still Sunday morning. What time do these people wake up? Everyone is suspicious about what went down, but even after the doctors confirm Robert had a stroke, Kevin (Norbert Leo Butz) still believes it was somehow Danny’s fault.

We actually need to talk about Kevin for a moment. From his waterproof hiking sandals and sleeveless man-tank, to the beer that’s permanently glued to his right hand, his outfit screams, “I’m a douchebag!” Just looking at Kevin makes me want to strangle him by his sunglasses’ neck strap, or by the faded bandana he wears like a necklace. It’s unfair to dress the least likable character this way.

Anyway, the flash-forward scenes cease, but the flashbacks are plentiful, and about as useful as the coming attractions for Mad Men, meaning these brief dramatic moments reveal almost zero information. It isn’t until the end of “Part 5” we conclude who “her” is, that there was another daughter named Sarah, slightly older, and prettier than Meg, who had a very tight bond with Robert, and tragically died at a young age. Around the same time of Sarah’s death, John’s flashbacks tell us their father used to physically abuse Danny. These backstories are telling, but would pack more of punch if doled out as full scenes, not like a scattered puzzle.

Danny grieves about the day Sarah drowned nearly every time he looks at his father, continually popping painkillers to cope. Once Robert recovers enough to leave the hospital, we see Danny also serves as a painful emotional trigger for Robert, and while he does love his eldest son, he can’t bare his everyday presence, the memories still too raw for the old man.

The family continues to agonize and flip-flop over whether Danny should stay, and if he should be kept in the will, when Robert finally instructs Danny, “I want you to leave and never come back.” Offering him a large amount of money to flee, Danny knows this check means he’s been disowned, is out of the will. Heartbroken and angry, Danny fiercely tells his Dad, “You will never see my face again.”

Spoiler alert! Danny does see his father’s face again, except it’s when Robert’s lying dead in Sally’s arms, having fatally collapsed on the way to his daily kayak run. While I’m sad to see Sam Shepard go, the death of the Rayburn patriarch frees everyone from their assigned family roles, compelling each of them to reassess who they are, and what they really want.

Danny’s final conversation with his father remains his secret. No one else knows that Robert gave him exodus orders right before dying. Meg cuts off her affair with Alec (Steven Pasquale), also turning down his firm’s offer for her to come work with them in New York City. Kevin goes from binge drinking and yelling, “Fuck it, I’m free!” to apologizing to his wife, whom embraces him back home. John takes Danny’s advice and “wings” his speech at the memorial service, which goes great, until those damned flashbacks return. John noticeably fills with more anger than compassion, forcing himself to wrap up his speech before saying something he regrets. Always pushing down his feelings for what the thinks is the greater good, John’s a ticking time bomb, his explosion, as we know, inevitable

The funeral also brings us long lost family friend, Detective Lenny Potts, (Frank Hoyt Taylor), whose return to town visibly rattles the Rayburns. Potts approaches Danny, saying he wished he could’ve done more to help back when, that he had tried talking to his family. Danny looks back at him, utterly clueless. “There’s something you need to know,” Potts informs Danny, handing over evidence that shows how the Rayburns, John, in particular, betrayed him 30 years ago.

Lots of unknowns still lurk, but the splattering of stories are bleeding together. The Jane Doe case John is working is definitely linked to whatever thugs are in charge of the scheme Erik and Danny are involved in, and with all these gasoline soaked boats blowing up, I’m assuming that this is where John gets his idea to hide “the very bad thing” he will soon do. “Part 5” affectingly closes with the sound of a heart, beating over the credits. 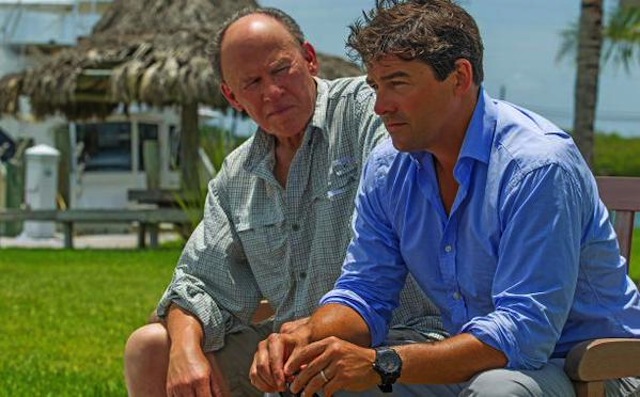