We totally won! Got the luxury building across the street to remove its private, crazy-illegal chauffeur lane. And thereby reduced the honking on our block 70 percent.

Because, oh man, that honking. It wasn’t bad enough during the usual give-and-take of New York City traffic. This was far worse. Imagine if random citizens were allowed to walk around the streets of Manhattan with air horns in hand, blasting at will. That’s what it was like on our block during the couple of years that lunatic chauffeur lane was in place. For 40-plus yards or so, traffic was squeezed to one lane, so that drivers of garbage trucks and fire engines and everyday SUVs were forced to lean, enraged, on their horns at 1, 2, 3 a.m. How’d we get it to stop, and strike a ringing blow for democracy at the same time?

It began when the old Verizon building on 18th between 7th and 8th was being refurbished. We didn’t mind the industrial fans billowing dust directly into our breathing space for the almost three years of its reconstruction. We didn’t mind the giant inflatable mouse that union workers periodically propped on the opposite (our) curb to bring attention to the alleged use of non-union labor. We didn’t even mind that Cameron Diaz was said to be moving in, forcing us to reoccupy our minds on an hourly basis with the question of whether she did in fact possess the city’s trimmest ankles.

To tell the truth, we didn’t even mind that her purchase, or the purchase by someone like her, was reportedly the most expensive ever made in the city’s history, making us condo-owners across the street feel pauper-like by contrast. It’s good to eat a chewy bite of humble pie every so often.

No, what got to us was the enraged honking. Of cabbies. Of cement-mixer drivers. Of mommies being made late bringing their offspring to school. All caused by the flaunting of that in-your-face illegal private chauffeur lane, complete with wooden barricades, concrete blockade and flashing orange lights. So that the limo chauffeurs could wait there hour after hour in case their well-heeled patrons might want a lift to get some sugar sometime, without having to walk to the corner.

It irked us maybe more than it should have. But here’s the deal. New York has gotten pretty good to live in. Murders are down 80 percent, surprisingly O.K. pizza slices are a buck. But the honking and blaring and wailing, for which only some 400 police summons are handed out annually, are redolent of a New York that was distinctly less good to live in.

We vented our grievance to the building’s doormen on more than one occasion. But of course the doormen were good guys, sympathetically powerless. We vented to various supers, who reiterated the falsehood that the building was still undergoing refurbishment. (Hadn’t undergone a lick of work in months.) When we pointed out that the permits they waved had in fact expired several seasons earlier, everyone shrugged. Whaddaya gonna do? their shrugs said. These are rich people…

So we had a brainstorm. We went around the corner to the normally impenetrable fortress of a fire station and banged on the door. Eventually we were permitted penetration and an audience with the chief. Here’s how our conversation went.

Us: “Have you happened to notice a luxury building around the corner that’s causing traffic jams at all hours of the day and night?”

Us: “Fire engines and ambulances are backed up day and night. Our concern is that someone in your jurisdiction is gonna die because a rescue vehicle didn’t get to him in time.”

As we laid it out for him, his face changed. Right there while he took in the situation, it got that quintessential New York expression, witnessing inequality in the flesh, a wrong that could be righted.

We pressed home. “Yeah, they seem to believe they have the right to delay fire engines because they want their limos right there at their beck and call.”

He said it again. “I am not a fan a that.” It was like hearing the words to the Star Spangled Banner. Justice for all. Our flag through the night.

The facts warranted. We sent her pictures to further prove that they warranted. Videos of limos idly parked behind the orange-flashing barricade while emergency drivers and everyday commuters were left impotently blasting their air horns.

Within two weeks it was gone. Now it’s quiet enough to hear the doorbell again. Catch that, Cameron, dear? In case you want to drop by to borrow a neighborly cup of sugar sometime? 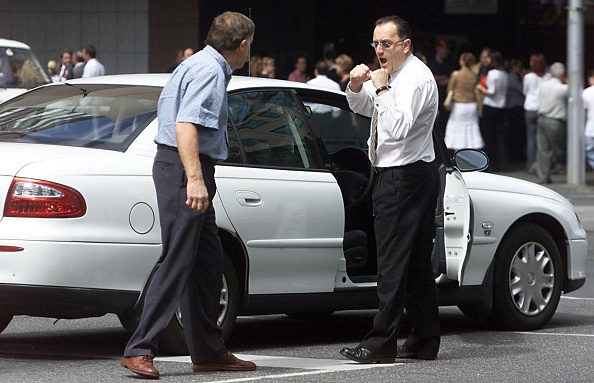