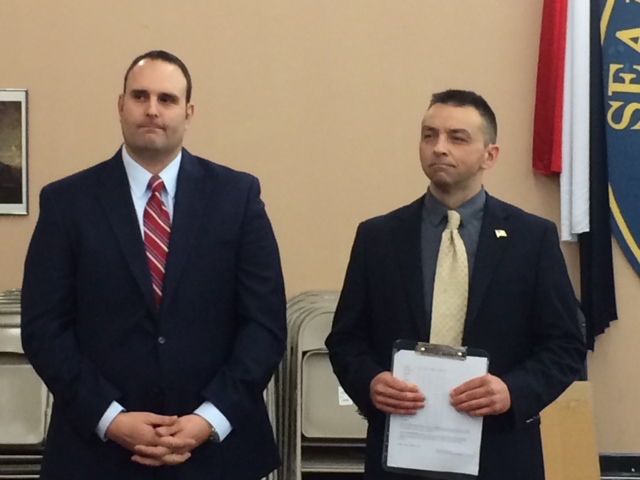 HACKENSACK – Anthony Cappola and Mark DiPisa won the Republican nominations to run for the state Assembly in the 38th Legislative District on Monday night, emerging victorious in a field of three candidates.

The tally after all votes were tabulated at Bergen County Republican Organization (BCRO) headquarters in Hackensack was 187 votes for DiPisa, 152 votes for Cappola and 83 votes for Ed Trawinski.

DiPisa and Cappola will take on incumbent Democratic Assemblymen Tim Eustace and Joseph Lagana in November.

Trawinski, who served as County Administrator in the administration of former Bergen County Executive Kathleen Donovan, was circumspect about his defeat.

“I think there was a backlash on the part of some people in that they didn’t understand that when I worked for Kathe Donovan, I didn’t set policy. As [former U.S. Secretary of State and General] George Marshall said about President Harry Truman, we kept our differences behind closed doors, and then I faithfully implemented the decisions that went against me,” Trawinski told PolitickerNJ. “Had I been fortunate enough to become a policy setter, I certainly have my own views and my own opinions. Whatever happened, the fact that there is this much interest in this race is good for the people of LD 38. I hope they give our candidates a chance.”

“We’ve got great candidates. They’re young, and they’re going to win,” said BCRO Chair Bob Yudin. “Right or wrong, what I was hearing was that [Bergen GOP LD 38 committee voters] didn’t want somebody that was associated with the Donovan administration, which I was fighting. But we need unity. These are two, new fresh faces who are very dynamic. I’m very optimistic.”

DiPisa and Cappola also both expressed optimism in the wake of their wins.

“I feel motivated to get the job done in District 38,” said DiPisa, 34, an attorney who lives in Lodi. “I think that there a lot of issues that we can whack Democrats over the head with. Taxes are always hot-button issues. The Democrats have raised taxes 115 times over the past 15 years. It’s time to make changes, and changes are on the horizon.”

“My knuckles touched every door in the district, and I called every single member of the [more than 300 Bergen GOP] committee at least twice,” said Cappola, 41, who runs an entertainment and party planning business based in Fort Lee. “That’s what I’m going to do now. We don’t have a revenue problem, we have a spending problem. As a business owner, I know how to balance my sheets. We need more business owners in politics. I’m going to work my tuchus off.”

Fernando Alonso, the Bergen County Republican Hispanic Association chairman, endorsed Cappola and DiPisa earlier in the day on Monday, citing what he believed is the candidates’ interest in the growing Latino community in North Jersey, including LD 38, which includes 12 municipalities in Bergen County and one municipality in Passaic County.

“I think that people decided that we needed to go in a new direction with younger, dynamic people who are the new face of the Republican Party,” said Alonso, an attorney from Oradell who unsuccessfully ran against incumbent state Senator Bob Gordon (D-38) in 2013. “This doesn’t just happen overnight. But we’re getting there. This is the beginning.”