TRENTON — The Hoboken native who could very well be the 33rd legislative district’s newest assemblyperson popped into the Division of Elections to drop off petition signatures for her candidacy this afternoon.

“I’m just going to do my job, whatever the job entails. I’m sure I’m going to be challenged in a lot of areas, but I’m excited,” said Annette Chaparro as she left the building.

Chaparro, as PolitickerNJ reported earlier this month, is the candidate Democratic party leaders in Hudson County tapped to replace embattled Assemblyman Carmelo Garcia (D-33), after Garcia ran afoul of the establishment last year. The little-know city hall employee and longtime Hoboken resident was the consensus candidate selected by Union City Mayor and state Senator (D-33) Brian Stack, who largely controls the line in the North Jersey district, and Hoboken Mayor Dawn Zimmer, who turned to Chaparro after recently appointing her partner, Lt. Kenneth Ferrante, to be the city’s new police chief in December.

Chaparro’s selection put to bed questions over whether Hoboken — one of New Jersey hottest cities — would maintain its representation in Trenton this year, after it became clear Garcia would not be receiving support from the Hudson County Democratic Organization. While there was up until today talk of Garcia mounting an off-the-line challenge in June’s Democratic primary, sources now say he decided to back down, potentially to opt instead for a run at city council.

Chaparro said she “grew up with” Garcia, but didn’t hesitate to jump at the opportunity when Stack and Zimmer approached her with it.

“It was something that I found intriguing and challenging, and I decided to do it,” she said.

If he bid is successful, she added that she hopes to begin by going into communities throughout the city and pinning down residents’ concerns to take back to Trenton.

“Everyone has their own issues and they’re own agenda, but they’re all human beings,” she said. “I don’t see me on one side or the other. I embrace everyone. “ 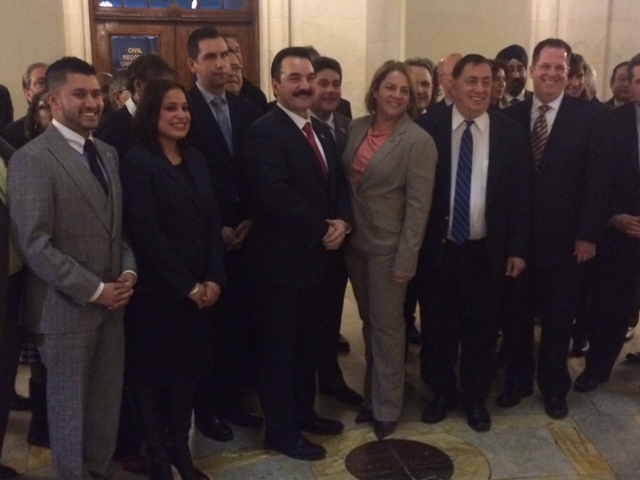