HACKENSACK – Democrat Roy Cho, the Korean-born attorney who ran an insurgent campaign in 2014 to unseat incumbent U.S. Rep. Scott Garrett (R-5) in New Jersey’s Fifth Congressional District, announced his decision on Sunday not to run again for the congressional seat in 2016.

“I’ve decided that I’m going to take a pass on running in 2016,” Cho, 33, of Hackensack, told PolitickerNJ on Sunday, noting that he just started a new job at the New York office of the Chicago-based law firm Winston & Strawn as part of its private equity group. “This is a professional decision. After talking to my family, friends and supporters, I think it’s important for me to focus on the professional side of the ledger.”

Cho’s campaign against Garrett, a conservative Republican now in his seventh term, at one point appeared close. A combination of a well-run, grass-roots campaign, a Garrett gaffe in a campaign flyer about the congressman’s actions after Hurricane Sandy and some powerful fundraiser friends got Cho within five points of Garrett with three weeks left in the campaign.

Although Cho raised around $1.3 million for his campaign with no help from the national Democratic Congressional Campaign Committee (DCCC), money proved to be decisive in the campaign’s final weeks. According to Cho, Garrett spent $2.2 million of his campaign war chest to defeat Cho, including $1.3 million in the campaign’s last week, contributing to the eventual 55 percent to 43 percent margin of victory in favor of Garrett.

“This was the most expensive race the Fifth District has even seen, and the most money [Garrett] has ever spent against anybody,” Cho said. “What we saw in this election is the impact of money on American politics, whether it’s about local or federal races. Campaign finance is an issue that I want to keep talking about.”

Cho said that he still wants to be a visible presence in local and state Democratic politics. Besides campaign finance reform, he remains concerned about issues such as transportation infrastructure investment and the need for public/private partnership in government.

“I will certainly continue to be involved. You will be seeing me at events. I’m going to be working directly with the party, including working closely with [Bergen County Democratic] Chairman Lou Stellato, [state Senate Majority Leader] Loretta Weinberg (D-37) as well as all of the other elected Democratic officials in Bergen,” Cho said. “I think the Bergen Democratic Party is much stronger now after the great win that my good friend [Bergen County Executive] Jim Tedesco had. Bergen is the bellwether county of New Jersey. With the party unity right now, we can do a lot of good – we can be a mini-experiment as to what we can do if we work together.”

With Cho’s exit from the 2016 CD 5 congressional race, it appears one less potential crack in the Bergen Dems’ unity will not appear. Ridgewood Mayor Paul Aronsohn, who ran unsuccessfully against Garrett in 2006, announced last week that he would not seek a 2016 rematch against his former foe. It now appears that Josh Gottheimer, of Wyckoff, a business executive and former adviser to both Bill and Hillary Clinton, is now the most notable name reportedly interested in seeking the CD seat.

Whoever is the eventual Democratic nominee, Cho made it clear where he stands.

“I’m going to support whoever the party decides the candidate is going to be. I think it’s important that we have a unified party and that we not have a primary, especially going against an incumbent who has the ability to raise a tremendous amount of money,” Cho said. “I’m excited to help that individual, and help bring in the kind of representation that the people of the Fifth Congressional District deserve. If you want to win the district, you need the money to get your name out there.”

Cho spent his Sunday calling the Democratic party chairs of Bergen, Passaic, Warren and Sussex counties, the four counties that have municipalities in CD 5, and state Democratic officials to inform them of his decision not to run in 2016.

Regarding his decision to run in 2014, Cho has no regrets, and looked to the future.

“It was a tough race, and it was tough year for Democrats. But despite that, it amazed me how people around the country chipped in to help out in our little race here in northern New Jersey,” Cho said. “My best memory of the campaign was to see volunteers come in to our campaign office who had never been involved in the political process before. It was democracy at work. I was a political science junkie growing up, reading about it in books, and I was seeing it in action. I learned some tough lessons during the campaign, but I saw so much good in people. It gave me a lot of inspiration. I hope there is a political future for me in the long term. I would do it all again.” 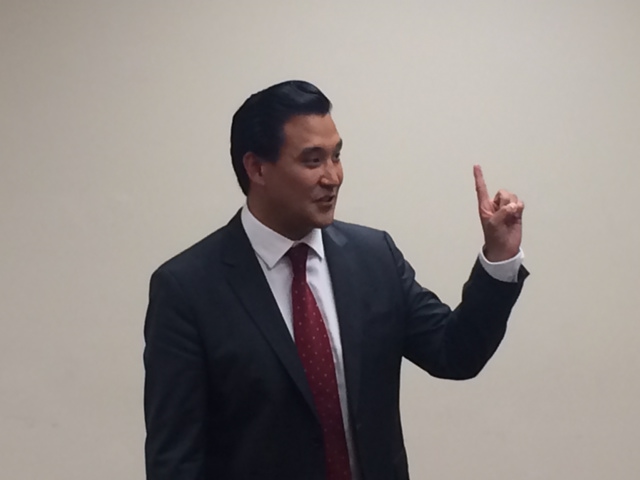