With just over 100 episodes completed, the residents of Cougar Town will lift their last class of vino this Tuesday night.

The sit-com, with what’s probably the most inaccurate title ever, is ending its (kind of improbable) six year run. It began life as an ABC show, but the network axed it after just three seasons. Cable network TBS rushed in to save the day and resuscitated the show, carrying it for the last three years.

The show was about single mom Jules Cobb (Courteney Cox) and her dating habits – for about five minutes. After just a few episodes, Jules began exclusively seeing and eventually married her neighbor, Grayson (Josh Hopkins) and the show became about the couple and their inner circle of friends which includes married couple Ellie (Christa Miller) and Andy (Ian Gomez), friend Laurie (Busy Phillips), Jules’s son Travis (Dan Byrd), her ex-husband Bobby (Brian Van Holt) and (sometimes) creepy neighbor Tom (Bob Clenindin). The group spent nearly all of their time together and much of that time involved drinking a lot (A LOT!) of wine. In fact, Jules had a series of progressively oversized wine glasses that she affectionately named Big Joe, Big Carl and Big Lou.

Overseeing the action behind the scenes was creator and showrunner Bill Lawrence, whose credits include Spin City, Scrubs, and he’s now in charge of the NBC’s Undateable.

While Lawrence has moved on to other things, he still loves to talk about Cougar Town, saying, “I think it’s really cool that people have stuck with us, are enjoying this finale season and are still so invested in the show and in these characters.”

Having worked on series finales before, Lawrence admits that he’s not really upset about this show ending, for a very specific reason. “Normally you get sad when a shows ending because you think you’re never going to get to see the people from that show again,” explains Lawrence. “It’s like Thanksgiving at your family’s house – only every day for six years. You love each other but you drive each other crazy and through it all you know you’ll miss each other when you can’t be around each other every day. A lot of these people were my friends before the show started. Some of the producers and the crew and I have been together for a really long time, since Spin City, and we know that although we won’t all be together at least some of us will be. So, it’s not as depressing because of that.”

While he’s not necessarily sad, there are a few aspects of the show that Lawrence admits he’ll miss.  “My wife (Miller) was a regular on the show and Courteney is one of my best friends. Very few people in the world get the ability to create a situation where they get to go to work every day with their friends. That was really fun and special and I don’t think you can recreate that. It wasn’t like we became friends after the fact. We went into this with the through, ‘hey wouldn’t it be great to create something that we can all together,’ and then we were lucky enough to have it survive for six years.”

One of the biggest surprises during the run of the series, says Lawrence, was that Cougar Town gained a second life on TBS after ABC let the show go. “I don’t think that happens a lot and it was cool and satisfying. It’s nice to be wanted by somebody after you’ve been rejected by someone else.”

Lawrence points directly to the fans for some his favorite moments from the run of the show. “It’s weird when you get on a show where the fan base is so rabid that they know the show better than you,” he says with a laugh. “But I appreciate that a lot, really. The hard core fans have often embarrassed me by knowing the rules of the show better than I do.”

One thing that doesn’t embarrass Lawrence is the oft-mentioned issue of that awkward title. “We were worried about that at first,” he reveals, “but it really became such a badge of honor for us and our fans. The fact that people dug us and that they took to making fun of it over the years is great. I won’t change a thing about that title. It wasn’t what the show was after the first few episodes, but I still won’t change it now. If you look online people did mashups of all the things we did in the opening title sequence and I would be bummed if we didn’t get to do those openings the way we did.”

Through his years of working in television Lawrence stuck to a credo on Cougar Town that he hopes to adhere to going forward. “When you’re lucky enough to work with people that you like, it’s easy to take that for granted and then overnight you’re in another job with people you don’t know well. As I’m heading into the twilight of my career, I’ve decided that I only want to work with people that I want to spend time with. Now the joke in Hollywood is that that rule limits it to about 20 people,” he says with another laugh. “It’s call it the ‘No Asshole Policy’ and people who’ve worked me are aware of the policy and I’ve really yet to meet someone who doesn’t agree with the idea.”

When asked if he has any regrets about his time on Cougar Town, Lawrence responded quickly with, “When you’re in the middle of a show you sometimes get regrets about certain things. Like in the beginning we thought if we’d titled this something other than Cougar Town would it have initially been a bigger hit, and things like that, but those regrets go away once you get deeper into a show because the reality of it is, if someone had come up to me at the beginning of all of this and said, ‘hey you just sold the show and it will never be a huge gigantic hit but it will have a loyal following and it’ll be on for six years and everyone will be close friends,’ I’ll take that every time. So no, in my mind, no regrets at all.”

Just after he says that, Lawrence did admit to one thing that slipped past his team that could have been lucrative. “We did drink a lot of wine on the show, but I guess we weren’t smart enough to capitalize on that by creating our own brand. But, we were absolutely savvy enough to have really good brands send us free bottles of wine. We were just really excited to get that free wine.”

Now as the show prepares to air its finale, Lawrence offered just a few hints about the final thirty minutes of the series. “The trick to this was we were talking about adult friendships and people in their 40s here. It wasn’t like Friends or Scrubs in that you couldn’t really say that everyone’s life is going through these gigantic changes and that was how to end it. I don’t think that’s what people are looking for in this show. For us the burden was how to you make it satisfyingly emotional and dramatic and we feel we did that by making a finale that isn’t disingenuous to the show. I like doing finales and one thing that was fun for me is that I like giving people who’ve worked together for so long a chance to really say goodbye to each other and you’ll see that in this episode. The people that got emotional and the stuff you see them doing is all very real. I hope people like it. I think we were very clever in how we did brought this to a close.”

Clearly Lawrence wouldn’t give up specifics, but he did say that one beloved cast member will be back for the finale. “Yes, Bobby Cobb will be there, because it was really important to me to have everyone back together for this,” discloses Lawrence. Faithful fans know that Cobb left the group earlier in the season when he accepted a job out of town.

When given the chance to say anything about the show to close out this interview, and the series, Lawrence took a breath and said, “It’s such a fragmented landscape in TV right now and people have so many options. To have a show survive for six years and have such a faithful fanbase that follows it from spot to spot and still cares enough to tune in every week is just huge to me. Cougar Town was extremely fun to do and we wouldn’t have been able to without the fans and we know that. I’ve never really had the ability to say directly to the fans just how grateful I am for their loyalty, so I’m really happy to be able to say a big ‘thank you‘ right here, right now. Thank you!”

So, get your jumbo-sized wine glasses out, have one last pour and raise that glass (if you can! Pleases, for safety, use a straw if needed) in a final toast to Jules Cobb and the cul-de-sac crew on Cougar Town.

(Note: #OneLastPour has been this season’s hashtag for the show so feel free to use that to connect with other fans as you celebrate and/or mourn during the series finale.) 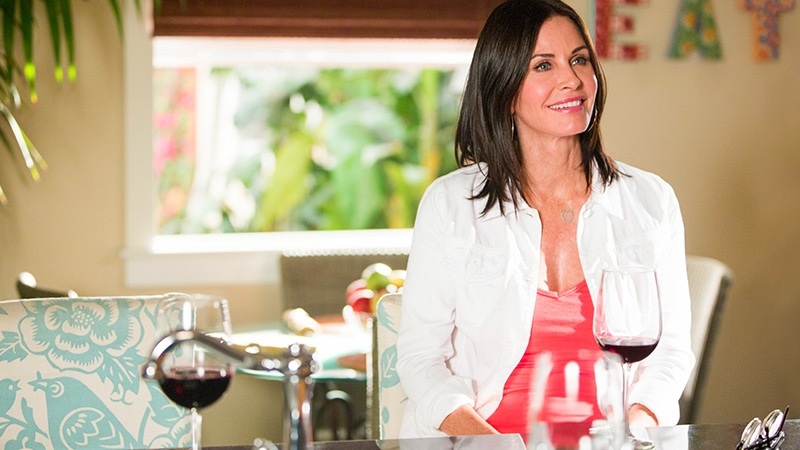