“What this is really doing to the council is, it doesn’t allow us the time to thoroughly look at the budget,” Ms. Ferreras said today during a breakfast forum hosted by Crain’s New York Business.

Ms. Ferreras has raised this point before, when she called for more accurate and timely information—and more transparent units of appropriation to make tracking budget spending easier—when the city’s budget director Dean Fuleihan testified before her committee earlier this month.

The finance chair took questions at the breakfast alongside fellow members of the council’s dominant progressive caucus, Councilman Jumaane Williams, Councilman Mark Levine, and Councilman Brad Lander. For the most part, the members, who are allies of Mr. de Blasio, had good things to say about the council’s relationship with the other side of City Hall. But when it comes to the budget, they admitted there is some back-and-forth—and some delay in getting full budget information.

Mr. Lander said that on issues including police staffing, housing and planning, he expected more detail to come in the executive budget released in April.

“There’s a lot of areas where we saw this through the process this year, where the preliminary budget is not actually what they are proposing,” Mr. Lander said. “I think we know that, the commissioners have all said as much, ‘Oh we are still talking and in the exec, we will put out really what we are proposing.'”

“For both council members and advocates, it gives us a very, very short window because by charter we have to pass the budget by June 30,” Ms. Ferreras said. “The executive is being released in late April with all the details we would normally get in late February. You can just see that you’ve eliminated about 60 to 90 days of real conversation and real negotiation.”

It’s something she said she hopes will change next year.

“While we work with that mayor and the preliminary has now passed, I’m looking forward to engaging with them right after we pass the budget to begin the conversation for fiscal ’17, because we need him to put the majority of the detail in the preliminary and not in the executive,” she said.

A spokeswoman for Mr. de Blasio called the mayor’s budget process “one of the most transparent” in history.

“The de Blasio administration has worked to implement one of the most transparent budget processes in history. The Mayor’s preliminary budget in February reflected needs identified to date. And the executive budget released this spring will reflect months of conversation with the Council, agencies, and other stakeholders, including the Council’s extensive hearing process with agency heads,” spokeswoman Amy Spitalnick said.

Mr. Levine praised the mayor for moving away from the “budget dance” process of cutting services only for the council to fight to get them back—but noted some additions made last year, like parks department maintenance workers, had not been baselined this year.

“There were some signs of tiptoeing back to the budget dance,'” he said.

Mr. Lander noted that under the city charter, the mayor simply has more power when it comes to the budget, particularly due to his ability to make the city’s revenue estimate.

“The mayor has too much power,” Mr. Williams added. “Our charter gives, not just this mayor, but the mayor in general, has the strongest power in the country in terms of how it relates to the City Council and I think that’s unfortunate.”

While he praised the “fantastic finance chair” for pushing back, he said council members often end up fighting over what amounts to a “small fraction” of the city budget.

“We don’t get that much money to actually put out hands on as firmly as we’d like,” Mr. Williams said.

The council will release its response to the mayor’s preliminary budget next month—when it will likely ask him for priorities like hiring 1,000 new cops—ahead of the mayor’s release of his more finalized executive budget, also due in April. From there, the council and the mayor’s office will head into budget negotiations to reach a handshake deal in time to vote the budget through prior to the July 1 start of the next fiscal year. 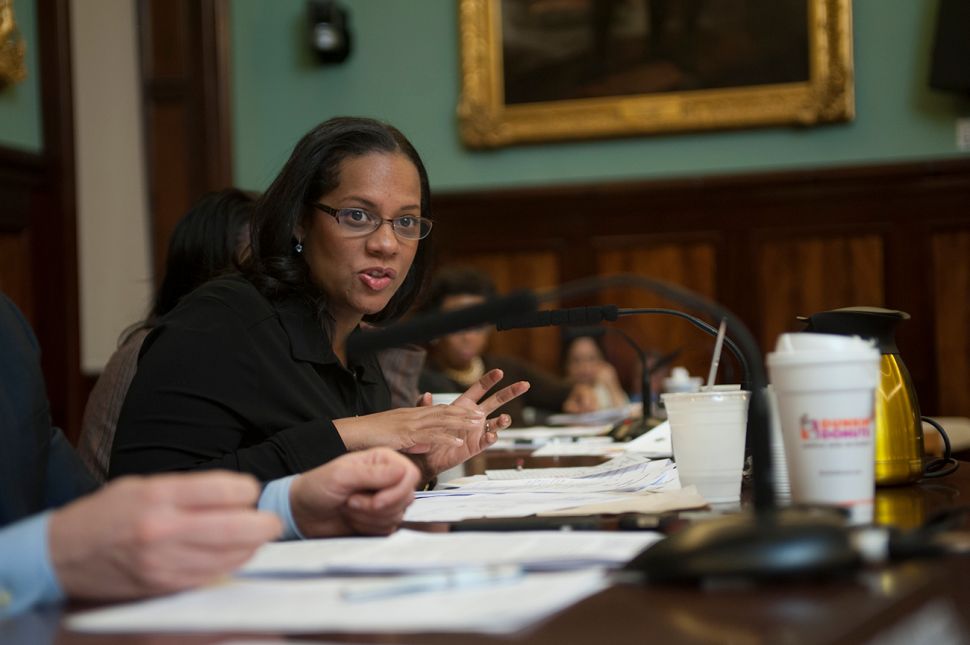