Councilman Ydanis Rodriguez, a Manhattan Democrat who sued the city after he was roughed up by cops at the Occupy Wall Street protests, said today he’ll donate his $30,000 settlement to the Center for Constitutional Rights.

Mr. Rodriguez said he was beaten, knocked to the ground and arrested at Zuccotti Park, the locus of the anti-Wall Street movement, on November 15, 2011, the night NYPD officers forcefully cleared the park. Police charged him with resisting arrest and disorderly conduct. The charges were later dismissed.

“No protester, whether an elected official or not, should be treated the way I was treated during my arrest in the Occupy Wall Street movement,” Mr. Rodriguez said at a City Hall Press conference. “As a lifelong activist, I was taken aback by my treatment and am gad to see justice for my and some of my co-plaintiff’s mistreatment.”

Protester Jeffery McClain settled with the city as part of the same suit filed in Manhattan Federal Court and received $70,000. Another protester, Yonatan Miller, received $1,500.

Leo Glickman, an attorney for Mr. Rodriguez and Mr. McClain, said the city’s handling of the Occupy Wall Street protest was “deeply troubling.”

“The city’s handling of the Occupy Wall Street movement was deeply troubling to anyone who cares about freedom of speech and the rule of law,” Mr. Glickman said. “Ydanis Rodriguez, the human being, was brutalized and falsely arrested.”

“But preventing him–an elected council member–from observing what the police were doing on that night also represented a betrayal of our democracy,” he added.

Mr. Rodriguez said he chose the Center for Constitutional Rights to receive his settlement money because an attorney from the left-leaning nonprofit represented him when he was arrested as a college student in the early 1990s. Mr. Rodriguez described the arrest as a case of “police brutality.” Vince Warren, the executive director of the center, thanked him for the donation.

Another liberal in the City Council, Jumaane Williams, stood with Mr. Rodriguez at the press conference. He also sued the city after he was arrested at Occupy Wall Street, but he said he had yet to settle. Mayor Bill de Blasio, a fellow Democrat, was supportive of Occupy Wall Street when he was public advocate, unlike his predecessor, Michael Bloomberg. 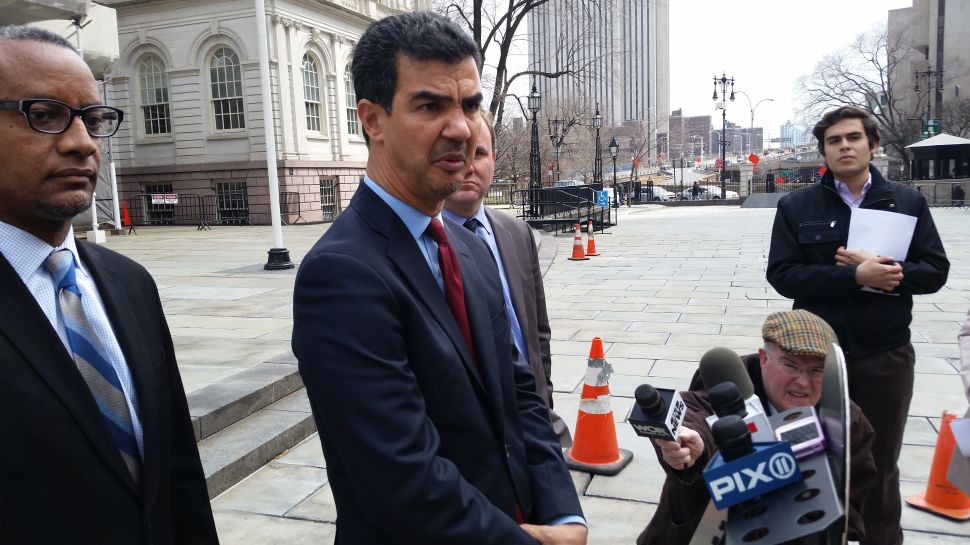