Speaking after an unrelated education press conference in Brooklyn, Ms. Fariña fiercely reiterated a number of the arguments Mayor Bill de Blasio made against the governor’s plan when testifying to the state legislature in Albany last month. In his State of the State address, Mr. Cuomo argued that rooting half of a teacher’s evaluation in student test scores and the other half on observation is the only way to improve stubbornly low pupil performance rates.

“I want to be very clear: 50 percent of teachers’ evaluations based on testing to me is not what should be happening. Teachers are not test results,” Ms. Fariña said, arguing that many other factors deserve attention. “Teachers should be assessed based on many things. They should be assessed on their work with parents, how they collaborate with each other, their ability to get better at their jobs through professional development.”

The chancellor also blasted Mr. Cuomo’s call for the firing of any teacher whose students fail to meet test standards after two years as an intrusion on the internal workings of schools.

“The other thing about this is it also takes away principal autonomy. No CEO in the city would allow an outside force to tell them who to hire or how to keep them,” said Ms. Fariña, herself a former Brooklyn public school teacher and principal.

The de Blasio administration is politically linked to influential teachers unions that only grudgingly agreed to the current evaluation system, which rates almost 100 percent of teachers as “effective.” Pro-teacher groups argue that low performance rates are the result of underfunded schools and generational poverty.

Mr. Cuomo, who has received large campaign contributions from entities tied to privately-run charter schools, has said he would agree to almost triple the state’s education budget—from $377 million to $1.1 billion—if the state legislature agrees to his reforms.

Ms. Fariña emphasized she is not opposed to all standardized testing or an evaluation system in general.

“I believe in testing, I believe we need to assess, but the proportion that is being used in the evaluation is not the appropriate one,” she said.

In remarks to reporters in Rochester today, Mr. Cuomo noted that his mother was a public school teacher and that his plan includes $20,000 bonuses for teachers rated “highly effective” under his proposed system.

“I respect teachers and I know that this is about the students and providing the best education for students and that’s what the teachers aren’t happy about but that’s the way the world works. We have an education system to educate students,” he said. 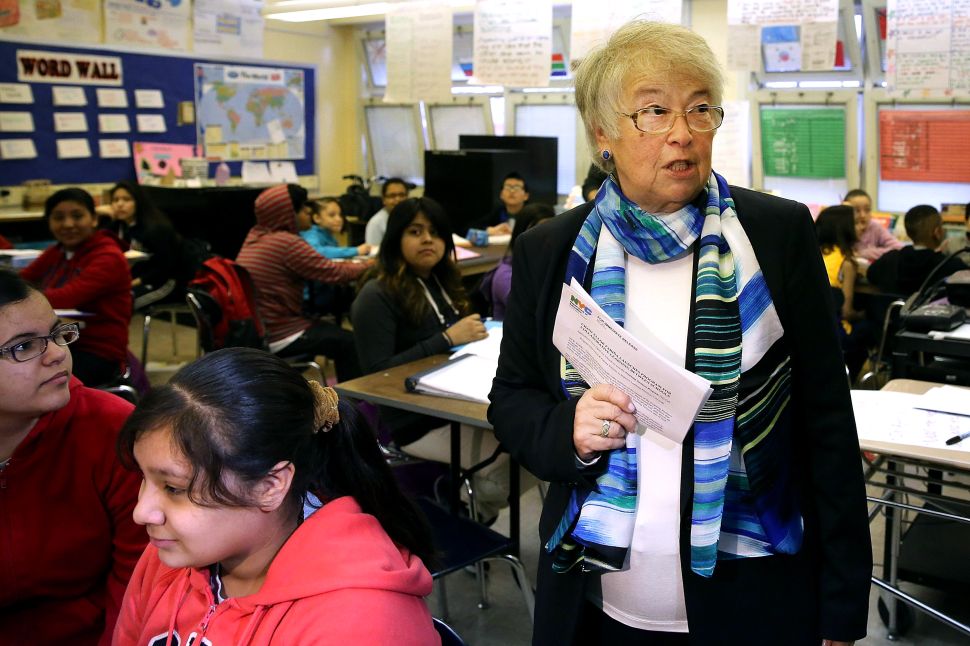