Mayor Bill de Blasio today told reporters that the city is eyeing a potential “inappropriate access” of a gas main—possibly by a resident—in the explosion that ripped apart a city block in the East Village yesterday.

As the rubble of the three collapsed buildings still smoldered on Second Avenue, Mr. de Blasio addressed the press at City Hall with top officials from the FDNY, NYPD and Office of Emergency Management—whose personnel he praised for their response to the incident—as well as local Councilwoman Rosie Mendez and Council Speaker Melissa Mark-Viverito. He stressed it will be an indefinite number of days before all the details are known.

“There’s an ongoing investigation, there’s a lot more we need to learn. We will not have all the facts until we can access 121 fully,” he said, saying it might be nearly a week before the debris is cleared. “Look, this will be an ongoing situation, we will be giving you a number of updates, there will be a lot to learn in the investigation.”

However, he noted that the building failed an inspection by Con Ed workers shortly before the blast, and that employee of the restaurant upstairs whiffed gas just 15 minutes before the fireball erupted.

“There’ a strong assumption it was a gas explosion,” he said. “There is a possibility here that the gas line was inappropriately accessed internally by people in the building. We don’t know enough, though, yet about that.”

The people working for Con Ed were on the scene as part of the installation of a new, larger gas main, and found the pre-existing work was “insufficient,” but Mr. de Blasio said that finding was not due to safety issues. Con Ed President Craig Ivey stressed that there was as yet no gas in the new pipeline, and that his workers did not smell any fumes.

Mr. de Blasio would not confirm or deny that the “inappropriate access” may have been off-permit work, or if there was evidence of illegal, potentially criminal activity.

“Until we do a full examination, we cannot say conclusively,” he said. “There is some X-factor here that we do not know yet, that we have to find.”

NYPD officials laid out a timeline in which Con Ed workers had met in the basement with a general contractor, plumber and a subcontractor around 2 pm to describe what was wrong with the work they had done. They left at about 2:45, and 15 minutes later the owner of the restaurant upstairs smelled gas and called the landlord.

The contractor and the owner’s son were in the basement when the structure collapsed at 3:20.

Four of the 22 people injured in the blast remain in critical condition, and six firefighters incurred non-life-threatening injuries in the rescue effort. As yet there have been no fatalities.

Two people remain unaccounted for, and workers are looking for a potential third missing person as they scour the debris.

Foot traffic along the block remains restricted, and the city has set up an assistance center in the nearby Tompkins Square Park Library. 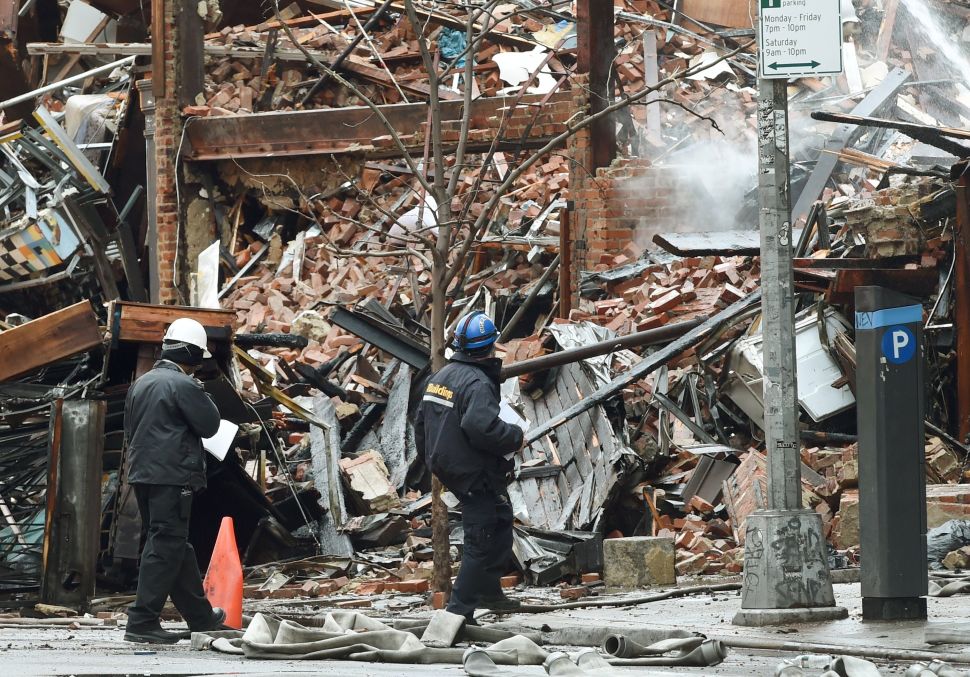