“This is a tough crowd,” a retired television executive told the Observer last week at the Pierre Hotel. “He’s trying to charm them.”

Mayor Bill de Blasio had just wrapped up a self-congratulatory speech at a breakfast sponsored by the Association for a Better New York, an advocacy organization representing business and real estate interests.

“Is it working?” a reporter asked.

Light applause had followed Mr. de Blasio’s latest exhortation for a $13 minimum wage. The hotel itself, luxury lodging off Central Park, is the physical manifestation of the phrase Old Money.

The executive did not think for too long. “No,” she replied.

The liberal Democrat, more than a year into his grand experiment in progressive governance, is assiduously courting the city’s real estate and business leaders as he tries to fulfill his mission of building and preserving 200,000 units of affordable housing, all to show that New York can simultaneously be a playground of the wealthy and the type of place where, say, a middle school teacher can contemplate owning a home.

The political calculus of all of this, given the expiration of the state’s rent and real estate laws in June, is almost as daunting as the sheer logistics—satisfying the civic elites, used to a member of their club, Michael Bloomberg, running the show, and the progressive organizations less afraid to oppose a mayor who may not meet every last lofty expectation, is the balancing act Mr. de Blasio must perform until the end of his tenure.

Mr. de Blasio, judging by his own assessment at an Association for a Better New York (ABNY) breakfast in the gilded trappings of the Pierre, is not wobbling on the tightrope.

“Some pundits wondered how the ABNY crowd would receive me—after all, my campaign was built around a vision of progressive changes,” Mr. de Blasio said over the clinking of silverware on china. “Surely, the cynics argued, progressive ideas would be met with the sound of crickets – or perhaps worse–when presented to those who have dedicated their lives to growing businesses and the economy. But knowing this organization, and many of the individuals who comprised the audience that day, I wasn’t the least bit worried.”

Thanks to legislative timing, real estate arcana is filtering into the political mainstream. 421-a is the focus of a raucous march. The mayor’s opposition to vacancy decontrol—a law that allows rent-stabilized apartments, once vacant, to go market rate—qualifies as substantive news.

While the wider business community, from finance to Wall Street, maintains some skepticism of the Democratic mayor—how pro-business can an ex-Sandinista really be?—the Real Estate Board of New York, the industry’s chief lobby, has grown closer to Mr. de Blasio as he promises an unprecedented pace of housing construction. Like REBNY, he mayor wants more building density and is less willing to cater to NIMBY fears that can block shovels from every hitting the ground.

REBNY may have opposed Mr. de Blasio’s effort to swing the State Senate into Democratic hands last year, but the organization, as their chairman Steven Spinola has maintained, isn’t looking to become the permanent opposition—a coziness that could, in time, begin to alienate the mayor’s loudest allies on the left.

Progressives close to Mr. de Blasio—and even those who feel he is not tilting left enough—want him to push state lawmakers to scrap 421-a, a significant tax break granted to developers who build multifamily housing. Depending on where in the city the housing is built, the developer is mandated to erect some affordable housing, but critics say the abatement amounts to a loophole that lines the pockets of the wealthy at the expense of everyone else. The flashpoint of 421-a, so far, has been a protest organized by several liberal organizations outside One57, a luxury housing building near Central Park, that received the tax break.

Developers argue that the abatement is a necessity as land costs skyrocket and a property tax system skewed against condominiums remains in place. Affordable housing, they say, would not be possible without 421-a.

Mr. de Blasio’s progressive friends—many of whom are determined to keep him from drifting to the center—argue that’s nonsense.

“I think at the end of the day, builders are going to build. People are building. I wouldn’t worry about developers crying poverty,” said Jonathan Westin, the director of New York Communities for Change, a left-leaning grassroots organization. “I think what will happen, they will make less money, which they won’t like.”

Mr. Westin and other housing advocates want, in addition to the demise of 421-a and vacancy decontrol, new housing developments to have as much as 50 percent of their units be affordable, a far cry from the 20 percent figure the de Blasio administration first proposed for its mandatory inclusionary zoning at the Astoria Cove project.

These demands, even from those like Mr. Westin who have the ear of the mayor, may run up against a hard reality—developers, on all ideological spectrums, believe they’re unworkable now and could be even more so as land throughout the city becomes more expensive.

“How is the mayor going to deal with 421-a? I think he wants to have more affordability and yet, anything he does that makes it harder to get housing off the ground, is a problem,” said one prominent real estate developer who requested anonymity. “The mayor’s picked an awful time to be ambitious. Land costs are incredibly high. Construction costs are incredibly high.”

The de Blasio administration has targeted East New York, one of the poorest but land-rich neighborhoods in the city, and the Jerome Avenue corridor in the Bronx, for a sweeping rezoning that they hope will result in the kind of housing needed to offset skyrocketing rents which rose faster than inflation over the last three years. Land prices are also soaring and Mr. de Blasio, perversely, won’t have his predecessor’s advantage–building during recessions when developers could gobble up relatively cheap land.

The demand for subsidies like 421-a and other concessions to the real estate community may be too great to ignore—even for an unabashedly progressive mayor.

“I think that the de Blasio administration worked very hard during the first year to establish good working relationship with the real estate community,” said Kathyrn Wylde, the president of the Partnership for New York City, a nonprofit representing the city’s top business leaders.

Ms. Wylde said she had seen much more outreach to everyone else in the mayor’s second year. She added, “I think that the relationship with real estate is really strong but his relationship with the rest of the community is a work in progress.”

A version of this story appeared in the March 16 print edition of the New York Observer. 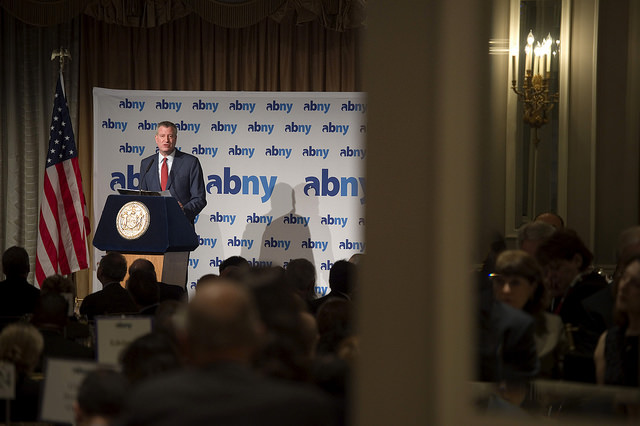