One of the most important aspects of liberty is having a say in your own destiny, the right to give or not give consent. How important is consent? Well, here’s an example. Most of us think that hugs are good, right? They makes the world a nicer place, warm and fuzzy, right? Well, not always. When it’s not consensual, it’s sexual harassment. It’s groping. It’s creepy. And you feel violated, your freedom and liberty violated.

There can be no liberty without consent. And, unfortunately, much is happening on the Internet that uses people’s information without their consent because getting your permission would get in the way of the profits being made by large corporations. Humans need to control their destiny on the Internet, the Internet shouldn’t control us. And that’s why consent is so important. For the Internet to progress, for society to progress, we need an Internet where businesses operate on principles that respect individuals, not just exploitation and the bottom line. Principles are even more important than ever when change is happening. They were developed over time to guide us through any storm of human controversy or conflict. While circumstances may change, principles do not.

There’s an Internet theory that’s been around on the virtues of the collective commons. Much good could come from it, and I think it can—when people participate voluntarily. But when it’s done without our choice or consent, there are very serious consequences. Maybe this “theory” and “innovation” is like the one behind the housing mortgages and credit-default swaps that ruined the economy and put millions out of jobs. Why should we give away our individual freedoms, our privacy, our consent, in the name of something that’s nothing but a theory? In exchange for what, free cat videos? I love cat videos but not enough to give up control of my destiny. Freedom to consume is not the same as freedom.

It’s a short step to saying an individual’s right to privacy is also censorship, your individual right would interfere with the “free” exchange of “information.” This has already been argued in some court cases in Europe, that you should have no say in how you are “monetized.” Those that suggest this are of course in the position of making billions of dollars in profits on the exchange of that information. And they have no desire to compensate you for your information, the very thing that makes the Internet interesting. Then they wouldn’t be billionaires, only millionaires. The same technology that websites like Google and Facebook use to sell your data-mined personal information over and over again could be used to figure payments to you for anything you created that draws eyeballs for them to sell to advertisers.

Sharing can be great, and necessary for human relations—but only when it is done with an individual’s consent. But when your information is taken from you and “shared” without your consent, this forced sharing is basically forced collectivism. It’s a kind of cyber Cultural Revolution that you are being led into. And the results will be as bad as the historical one, even though a lot of well-meaning people thought it sounded like a good idea at the time. Just like a lot of well-meaning Internet theorists think that an Internet commons can be built without even considering consent. I believe this is very dangerous; they’re helping take away liberty. As Martin Luther King said, “Nothing in the world is more dangerous than sincere ignorance and conscientious stupidity.”

These Internet theorists also invariably fail to distinguish between the profound moral difference between sharing something with a friend and distributing, without permission, other people’s files for profit. It’s a crucial distinction.

One of the reasons that this distinction is not brought up is because the Internet corporations don’t want you to see much discussion about the enormous riches being made on the Internet from both the consensual and nonconsensual selling of your information to advertisers, as if it didn’t matter. The advertising system has money and money is power. Ask yourself: Are you gaining real power over your destiny from the Internet, or just stuff?

If these evangelists truly want the Internet to be good for you, why don’t they discuss these three crucial issues—your consent, unethical distribution businesses and money? I see two reasons. First, the Internet corporations have lots of money. They spend lavishly to generate easy talking points and myths that do not include these issues. These issues do not help their bottom line. I’ve seen college professors, research institutions, and websites paid to propagate the party line. There are companies that are paid to plant “comments” and “discussion” for you to see and read on the Internet. It’s an industry now.

The second reason is ignorance. There are many well-meaning people that are currently buying the so-called “open Internet, sharing” belief system but haven’t looked at all facets of it or thought it through. To see how out of touch this is, consider that the Internet companies don’t even believe it themselves. You certainly don’t see them ‘sharing” any valuable search engine code on the “free and open” Internet. Or Apple code. (Both great code, by the way.) And protected by patents, not to be used without their consent. As it should be for everyone.

The big Internet companies really have little economic interest in protecting your information. That’s why society needs to develop other systems, checks and balances, regulations for the Internet to become sustainable, humanistic, democratic. What’s so hard about getting consent if you’re going to run a business?

If you want to have a better Internet, fight for people’s right to voice their consent and work to stop exploitative business practices. It’s in your own interest. What happens to one of us happens to all of us. Don’t let the Internet continue down a path that could look like digital Maoisim, with a Party elite at the top, rich and powerful billionaire Internet gatekeepers that control your information, and you at the bottom, in a virtual labor camp because you have no right to say no.

As Stephen Colbert said to one of the authors of the new Internet Red Book, Lawrence Lessig: “Well let’s see … so the hybrid [Internet] economy is where everybody else does the work and Flickr makes all the money?”

East Bay Ray is the guitarist, co-founder and one of two main songwriters for the band Dead Kennedys. He has been speaking out on issues facing independent artists—on National Public Radio, at Chico State University, and on panels for SXSW, Association of Independent Music Publishers, California Lawyers for the Arts, SF Music Tech conferences, Hastings Law School and Boalt Hall Law School. Ray has also met with members of the U.S. Congress in Washington, D.C. to advocate for artists’ rights. 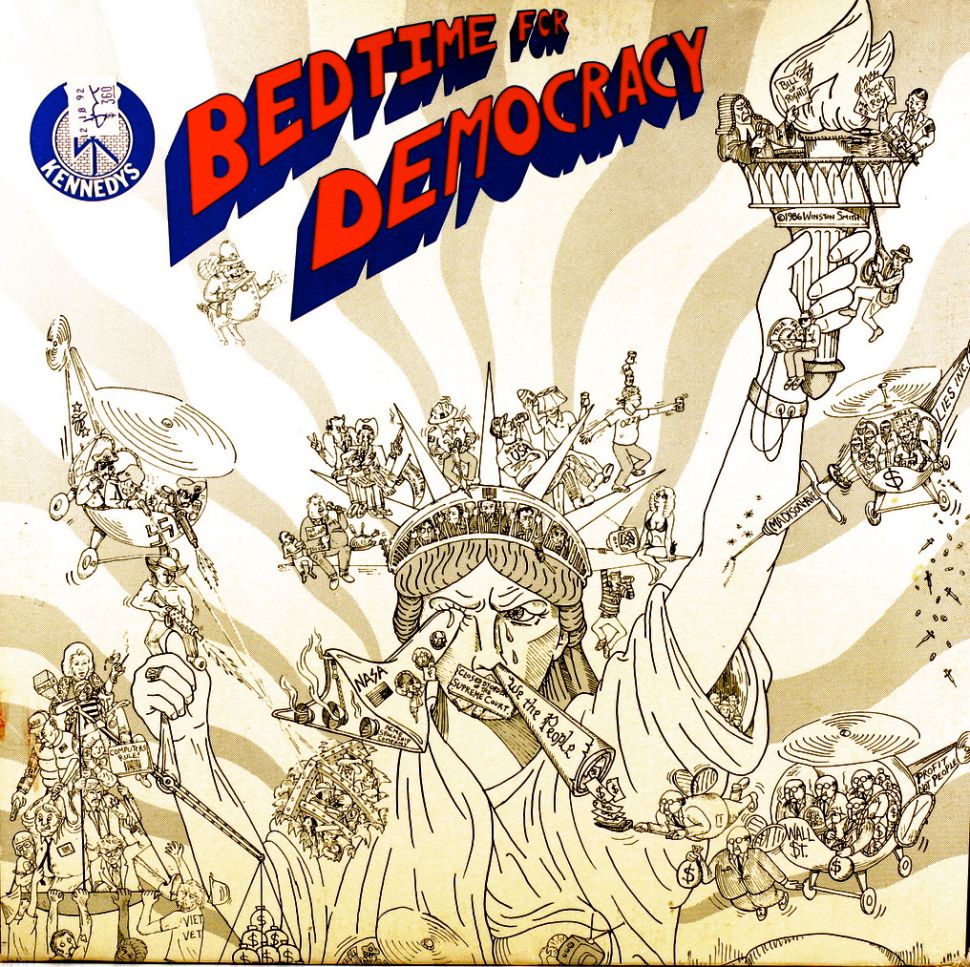