You know me—quiet, retiring, self-effacing. Humble even. There is nothing I love more than to fade into the background.

So today I’m going to indulge that urge and shove my wife to the foreground because she deserves a lot of credit for having saved Prime Minister Netanyahu’s speech to Congress from being disrupted by hecklers.

At Bibi’s last speech to Congress almost four years ago, my wife and I were guests of House Majority Leader Eric Cantor. As we walked into the gallery to take our seat we met a pleasant young woman who sat two seats away from us.

Well, it turns out she wasn’t as pleasant as we thought.

Halfway through the Prime Minister’s speech, she pulled out a red anti-Israel flag and started hurling curses about the Jewish state. The speech was thoroughly disrupted.Everyone looked up, including the Prime Minister. An elderly Jewish man to my right, whom I had been talking to just before the speech started, pulled the flag out of her hands and cupped his hands over her mouth.

It later turned out that the heckler was from Code Pink. Pictures ran throughout the world of her being dragged out of the chamber right in front of me.

I would later meet the young woman again at the Huffington Post Lounge at the Republican National Convention in Tampa in 2012, where she tried to set me up to say something negative about her while a hidden camera was trained on me. Oddly enough, we had a pleasant conversation and, discovering she was Jewish, I invited her to our home in New Jersey for the Jewish New Year of Rosh Hashana. She said she would come but it did not work out. If she’s reading this, I hope she’ll get in touch and allow us to host her for Shabbat dinner.

I later read that the man who sat next to us and subdued her paid an undisclosed sum as a settlement.

Fast forward to the Prime Minister’s speech yesterday. I walked in with Debbie to take our seats in the gallery. But our seats, which were directly behind Jewish philanthropists Miriam and Sheldon Adelson, were occupied. By three young women. They were so pleasant. They even spoke Hebrew. I had a sense of deja vu all over again.

This was reinforced by the fact that a day earlier, at a panel I hosted that featured Nobel Laureate Elie Wiesel and Senator Ted Cruz, the Code Pink people turned up in force and disrupted the event with giant signs opposing Israel’s brutal tactics.

Back to the girls, I asked them who they were and were they in the right place, and they responded that they were here to support the Prime Minister and to pray.

Reminded of what had happened two years earlier I wondered if these young women were a little too nice.

And that’s where Debbie stepped in. She told them that we were sorry but we had to take the seats that were allotted to us. So the young women very pleasantly meandered two rows away from us and somehow found other seats in a room where there truly were no seats to be found. Gosh, they were good. Blending in seamlessly.

Debbie then said, “They don’t have a ticket. They’re not supposed to be here. The reason is almost certainly that they’re going to ruin the speech and heckle.”

Debbie went to the police and sure enough, the young women made up some story about being part of a prayer group. They mentioned an organization they were a part of which the police later said did not check out. They had also told someone they were “Chabad” when they clearly were not observant. They had asked another woman to lie and say that she knew them.

The Capitol police took their details and evicted them from the room, a fact we found out only after the event. They police told us that while they could not be certain, they were fairly sure they were there to disrupt the speech.

How did they get into a building with an army of security? What were they trying to do in the chamber of the house? (And why do I always attract these hecklers to my seat? Weird, huh?)

Maybe we’ll find out. In fact, someone should find out who these people were. But thanks to Debbie at least they didn’t get to do whatever they planned to do while the Prime Minister of Israel was speaking. 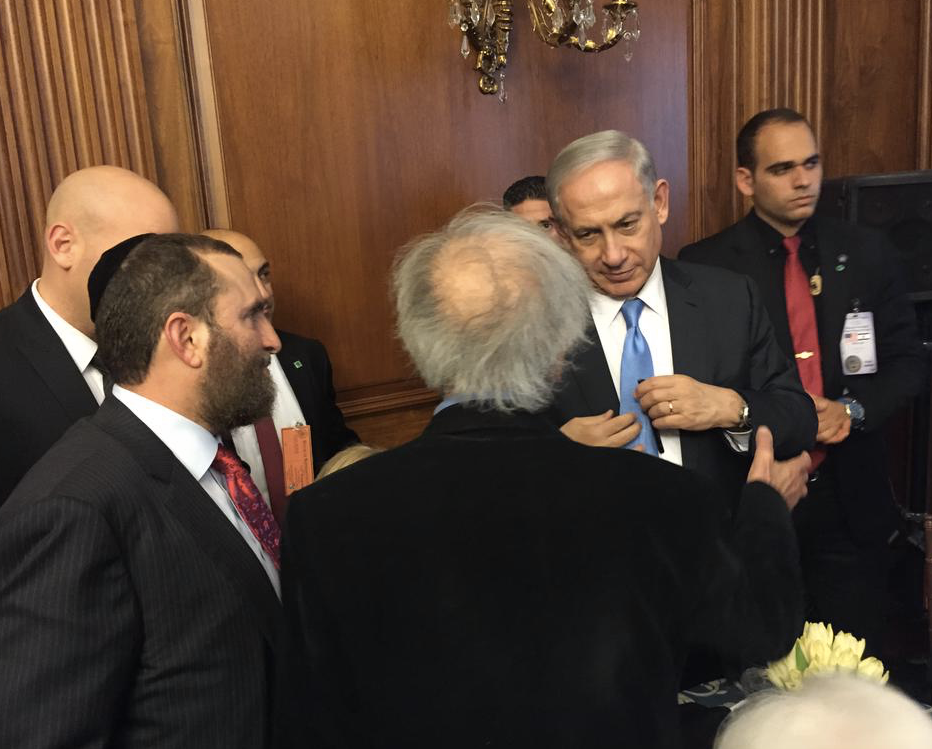