Most of New York’s congressional delegation said today they don’t like the circumstances surrounding Israeli Prime Minister Benjamin Netanyahu’s speech to the House of Representatives tomorrow—but that won’t stop them from attending.

The bulk of New York’s delegation to Washington—eight of 12 members of the city’s House members and one of its senators—gathered at Gracie Mansion this morning to talk with Mayor Bill de Blasio about the need to pass funding for the Department of Homeland Security. But just as they railed against Speaker John Boehner for failing to fund the anti-terrorism agency, the members also lashed out at him for inviting Mr. Netanyahu to address Congress about nuclear negotiations with Iran without notifying President Barack Obama, with whom the prime minister won’t be meeting.

Senator Charles Schumer said he was attending the speech to show the Israel-United States relationship is “strong and vital to both countries.”

“Both countries are in the lead in the fight against terrorism. And the second [reason] is preventing a nuclear Iran, which would be a catastrophe,” Mr. Schumer said.

Of the attending members of the House, Congressman Charles Rangel, the dean of the delegation, was the only one who said he would not attend.

“I want to make it clear: I am not boycotting the speech. I am just not going to the speech,” Mr. Rangel said.

Tying the speech back to the failure to fund homeland security, Mr. Rangel said he was “shocked” and “hurt” that the House was putting the security of both nations at risk. He also slammed the protocol behind the invitation to the speech—a letter inviting Mr. Netanyahu included Democratic Minority Leader Nancy Pelosi’s name, even though she was not party to the invite, and the invite comes as Mr. Netanyahu faces re-election back home.

“I think that for me to attend this would be violating the rules of the House of Representatives,” Mr. Rangel said, adding he did not blame “outsiders” for attending. “I do not think that the House of Representatives should be used as an arena for the debate of international politics. That is why we have a president of the United States, that is why we have a secretary of state. So I hope the word boycott is never associated with those who respect the rules of the House.”

Mr. Rangel’s worries about House rules notwithstanding, most of his colleagues plan to attend the speech. The only other member of the delegation who has said he will not attend is Congressman Gregory Meeks, who, like Mr. Rangel, is a member of the Congressional Black Caucus. More than 30 of the members of the caucus have said they will not attend, though Mr. Rangel objected to the characterization of skipping the speech as a boycott.

In New York, some Democratic members of Congress are in a are in a tricky spot due to the city’s large and pro-Israel Jewish population.

“I’m probably the only one here who still is not decided,” Congresswoman Yvette Clarke of Brooklyn said today. “I’m conflicted.”

Ms. Clarke said she would meet with some of her constituents who are in Washington today for a meeting of the American Israel Public Affairs Committee, where Mr. Netanyahu spoke today, before making a decision.

Congresswoman Nydia Velazquez said she’d attend—but called the situation “shameful and frustrating” and said Mr. Boehner had acted with “total disregard” for the decorum of the House’s rules.

“It’s disrespectful to us as members of Congress, to say that this was a bipartisan invitation which it was not; two, to disrespect the process—how do we know the policies of this administration? His negotiations are secret,” Ms. Velazquez said. “Yes, I will be attending, but I am very frustrated as a member of Congress to feel that the Speaker of the House, with total disregard, has put us in this predicament.”

Mr. de Blasio, too, continued to be critical of Mr. Boehner’s decision to invite Mr. Netanyahu to make remarks to the Congress during a campaign, which he said in the past had been a “no-fly zone” for visits from foreign leaders.

“I think Speaker Boehner made a huge mistake,” Mr. de Blasio said. “You don’t politicize the platform of the House of Representatives in the context of another nation’s election.” 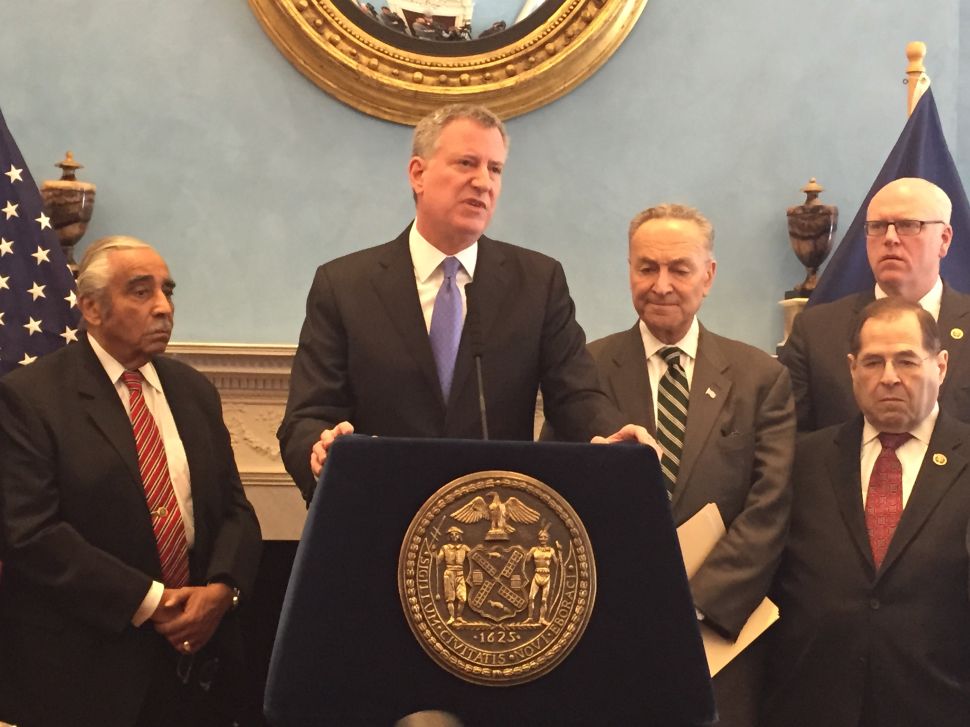