The boys, Dondi’s buddies, Corporal Ted Wills and Private First Class Whitey McGowan, were heading home. The war was over. The Iron Curtain had fallen over a ravaged, refugee-deluged Europe trying to rebuild. Shipped back to the states, the soldiers figured they left the little orphan behind.

Dondi, the brainchild of cartoonist Gus Edson, became a successful syndicated comic strip; the little boy came into the nation’s homes and hearts for the next 34 years. As with all creative process, there is something true to life that inspired the strip. Whatever an artist does from memory, that inspiration dwells somewhere. Perhaps it was Mr. Edson’s chance meeting with fellow cartoonist Irwin Hasen on a United Service Organization (USO) tour in Germany in 1954. The USO recruited cartoonists to entertain U.S. troops overseas.

In 1954 both men were being phased out. Mr. Edson, as about to lose his long-running strip,‘The Gumps.’

Mr. Edson’s’ idea was waiting in his mailbox upon Irwin’s return to New York City after the USO tour. It was a simple sketch of a little kid sitting on a duffle bag in oversized G.I. hat and pants. That was it. That was the little spark that ignited the hearts and souls of Americans for more than three decades.

Mr. Edson and Mr. Hasen worked as friends and partners on Dondi for the next ten years. Mr. Edson wrote the narratives and mailed a week’s dailies at a time to Mr. Hasen in New York. The comic artist drew the panels. The little six-year-old war orphan became a daily part of the lives of many Americans, who eagerly awaited the Sunday full-color recap. In New York, Dondi ran on the front page of the Sunday News comics. The little boy became an engaging social commentary, an endearing icon inspired by the real life artist behind the scenes. The little boy with large, ill-fitting GI hat, shirt and pants adopted by his U.S. Army buddies was Irwin Hasen and Irwin Hasen was ‘Dondi.’

Dondi lives. He is 96 years old. His inspiration propels a living eulogy to the long dead comic strip. Its run was over; it wore out the times or times changed. The love and moral lessons Dondi left behind are a legacy of the late Gus Edson and Irwin Hasen.

Born on 106th Street in Manhattan on July 8, 1918, Irwin Hasen attended PS 165 then DeWitt Clinton High School. After the Wall Street crash of 1929, his family somehow scraped up enough money to send him to the National Academy of Design. The school was only a few blocks from where he was born in Harlem. From affluence of his grandfather’s furniture business in lower Manhattan, where his father worked as a salesman, the Great Depression ended the Hasen family’s halcyon days with cook and chauffeur.

“I got basic training at the National Academy. It was on 110th Street. I can’t believe the work I did as a young man. I wanted to be on the stage. I was acting. I wanted to be an actor.” Irwin Hasen talks in short bursts that would fit in a dialogue bubble. His facial expressions are animated. He is vibrant, enthusiastic, peppy, happy. He is slight, five-feet-two-inches tall. No more, no less.

It is that stature, more likely than his animated eyes, that inspired Mr. Edson in 1954. It was only the germ of an idea, this little boy sitting on a duffel bag, alone, wide eyed, orphaned and looking for love. An inspiration that worked its way into the hearts of millions of comic strip readers that grew up with Mr. Hasen and Mr. Edson. Irwin never grew up. He is still that wonderful, sentimental little boy with enthusiastic countenance and animated eyes whose real life transects American twentieth-century history.

“I imitated Maurice Chevalier. I was a wise guy actor. A friend of mine said, ‘Show biz is not for you.’” When Irwin Hasen laughs everyone laughs. He has the most beguiling smile. He is always willing to joke. He jokes about himself, his diminutive stature; tells funny stories. If he exaggerates, it is to err on the side of comic fun. He doesn’t use coarse language, a lesson learned in the gracious days of growing up with his New York American Jewish family. Gosh, darn and son-of-a-gun are more natural to him.

Mr. Hasen responds to the early critique of his acting skills with appreciation, still holding out the pride of being a good impersonator that could make people laugh, “I’m so glad I made the right decision. I was about twelve when I started drawing. It was very close. I was darn good on stage. I made that decision. Being an actor is very tough.” So was being a cartoonist. Mr. Hasen often punctuates his labor churning out a daily strip saying, “I worked my butt off.” As close as he gets to vulgarity.

After Pearl Harbor, Mr. Hasen was inducted into the U.S. Army. It was 1942 and the military desperately needed recruits. His first day on the firing range revealed the fact that, with the rifle on his shoulder, Private Hasen’s fingers could not reach the trigger. A wise sergeant assigned him to Special Services. Poems in hand he trudged to the post’s newspaper and was taken in. It was serendipity. He began a cartoon strip called Sgt. Route Step O’Malley, and later became editor of the paper. His furloughs were spent across the Hudson River in New York City, in uniform, drawing covers for AA Comics’ ‘Wonder Woman.’

Mr. Hasen pulled guard duty and marched AWOL prisoners around the post, unloaded rifle on his shoulder. The ragged troops passed German prisoners of war that jeered and called insults at the little soldier. After his discharge, Mr. Hasen got a job at the New York Post drawing ‘The Goldbergs.’ His job in the newsroom lasted a year. Out of work, Mr. Hasen toured Germany with the USO.

He visited Nazi concentration camps and crematoriums at Dachau. What he saw marked him forever. “These people wanted to put me and my family in an ashtray,” he said in his apartment. It was the same walk-up brownstone building on the Manhattan’s East Side where he had been living in for many years. That was all he said about the Holocaust. His whole demeanor changed. A veil of sadness descended over his previously bright countenance, as he remembered Dachau.

“I never went overseas with the Army. Thank God. Other boys did it and died. I published a newspaper with cartoons. Thank God I survived. After the army I went into cartoons.”

He told about the antecedents of his art: “My father was a salesman. He used to draw pictures for people he sold furniture to. He sold them; it helped him make money during the depression. My cousin had a studio in Paris. My family had an artistic strain. My grandfather was a house painter in Russia.” Mr. Hasen pointed to two portraits on the wall of his living room.

“I was twelve years old when I did my grandmother and grandfather. Those are photographs of women I used to go out with. What did they see in this little runt?” His thoughts jumped around, as he glanced at the walls. The portraits showed great artistic talent, as did covers he drew for Bang Magazine, which are framed on a wall. Famous prizefighters of the day come to life on these old magazine covers. The fight game was crooked in those days and the young artist met gangsters that took a liking to the little guy.

Irwin Hasen survived the tough streets of Harlem growing up, the Army, the fight game and the rough and tumble life of a cartoonist, hustling gigs with newspapers and comic book publishers. He was good. He went to a convention of cartoonists. “A man sat next to me with a mustache. He turns around to me, he didn’t look at me, he just turns and says, ‘I like the way you’re doing it.’ That was Roy Crane, my idol. Roy Crane did ‘Wash Tubs and Captain Easy.’ That was the year I went down to the Island.”

The island was Bonaire in the Dutch West Indies. Irwin Hasen took a vacation, bringing his work for the Dondi strip. He met Captain Don Stewart, dive pioneer and founder of the first resort dedicated to diving. The chance meeting inspired a friendship and strip series that imparted a moral imperative for ocean conservation. Captain Don was a stalwart. He explained the importance of preserving ocean resources and taught the cartoonist to dive. It was a vacation like no other for this New York City dweller.

“Back from Germany, Gus sends me this picture of this kid. A kid from a European country who comes to America. I get a chill. I still have that chill. I said, ‘Gus, that is going to be the best strip in America and it was,” Mr. Hasen said. And it was.

“The making of an American,” Mr. Hasen remembers the editor’s words, after he studied sample strips for a few minutes in his office.

When Mr. Edson died at age 65 in 1966, ten years into to strip, Irwin took it over with the help of a friend. “I made OK. It was OK for the two of us. Money meant nothing. That little kid let it come across. I played great tennis in South Hampton, I wrote books…” he jumped again.

“Comic books were my life. God sent him down to me yesterday…” This time the leap went back to Captain Don and his time diving on the Island of Bonaire. Captain Don had just died. He was ten years younger than Mr. Hasen. They had not seen each other in almost 35 years. From memory, Mr. Hasen drew a caricature portrait of farewell to Captain Don.

“I’m an artist.” He is also a man of keen observation with social commentary whose life and loves were translated into comic strip stories read across America. Of his life’s work in art, how he did it, he cannot explain, only to reveal his secret, “I didn’t think about it. I just did it.” Dondi lives. 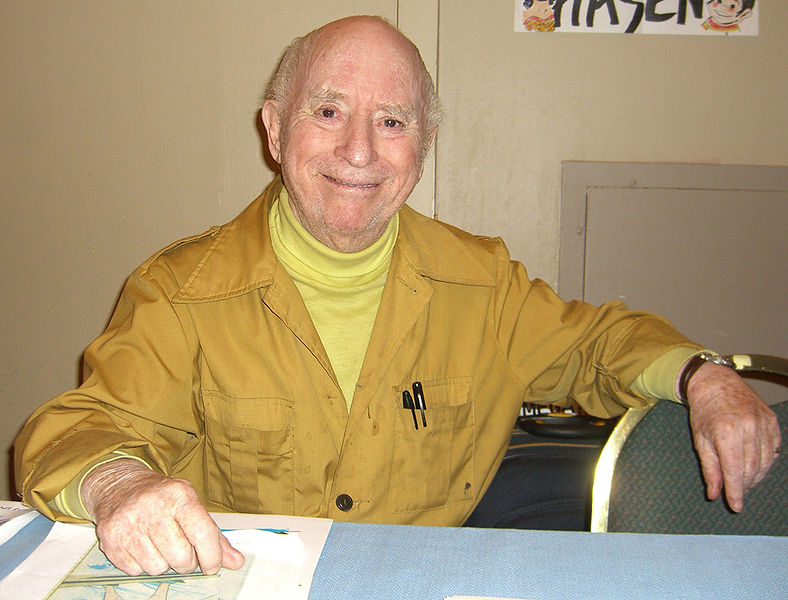