E! is going all out for its first scripted drama, the lavish British Monarchy-centered The Royals, by partnering with Uber to give New Yorkers a free ride in a Rolls Royce anywhere in the city (something you can be doing right now, by the by). I, on a related note, often scrounge in floor-pants pockets for quarters to ride the subway. So, naturally, when E! extended the four-wheeled offer my way, I put aside my natural disdain for the Kardashians and gave E! a resounding yes.

Now, on the surface, the whole process seemed amazing. A sparkling clean Rolls Royce would pull up, with a Range Rover covered in British flags clearing a path for us, and it would take me to any destination I wished. I’d feel like a real life whoever this person is.

In reality, here’s what happened: The Rolls and the Range Rover didn’t exactly have the best communication. The Rolls kept getting lost and the Range Rover kept calling me and telling me to go to a different location. This would have been irritating if I hadn’t asked them to pick me up at Penn Station, quite possible the most annoying place in the city, nay the world, to find proper parking. It would’ve been easier for me to jump through the Rolls’ moving windows. The driver of the Range Rover sent me a series of texts, one of which said simply “So sorry.” That struck me as hilarious for some reason. I told them not to worry, because the day I get mad at the Rolls Royce driver picking me up free of charge is the day I don’t know who I am anymore.

Oh, I should mention that they they were scheduled to drive me about ten blocks to the Observer office, which, yes, I’m very aware is an obnoxiously walk-able distance for all the effort involved.

But they found me! Eventually! And it was very, very pleasant. There were astonishingly soft leather seats, a frighteningly unfamiliar amount of leg room, an iPad was playing The Royals trailers next to me, and there was even a genial driver who is currently an NYPD Officer and Uber driver on the side, who just started his own entertainment business. (If you’re reading this, good luck with your business, buddy!)

Then, ten blocks and about 10 minutes later, it was over, a flash of smooth riding and leather seats that ended just as quickly as it began. A peek at how the other side lives, just as brief as a subway ride but infinitely more comfortable.

And, really, the entire thing was just so indicative of E! as a whole when you really think about it. Because what is a Keeping Up with The Kardashians, or a Total Divas, or even a Fashion Police but a brief yet comforting look behind the curtain? I don’t think, or maybe I just hope, that anyone watching those shows actually is delusional enough to believe they themselves live that lifestyle, nor do I think anyone is going to step out of that Rolls Royce Uber ride expecting similar daily transportation. I recently tried to delve into the reason why people watch KUWTK, and the most acceptable answer I commonly received was that it’s a mindless, stress free look at a lifestyle beyond one’s reach.  It’s just a rush of the rich life, like a sugar high of opulence.

And The Royals is set to be much of the same, even though it is E!’s first foray into scripted television. No one is headed over the that channel to indulge in some hard-biting political intrigue. There are countless other shows on right now that serve that up in abundance. The Royals highlights the lifestyle over the  — the clothes, the tabloids, the money, the power — and that’s because E!’s knows it’s target audience by this point.

So, really, whether or not you’re into watching The Royals, or any of it’s network peers for that matter, boils down to how appealing a simple ride in a Rolls Royce turned Uber sounds to you. I, for one, enjoyed the ride once but felt a strange, powerful longing for a cramped A Train and the smell of urine. But for every me there are millions of people who would be wholly content, no, absolutely exhilarated by the chance to take up a spot in a different life, even if it were only for about ten blocks, or ten minutes, or the span of an episode of The Royals. In the end, it all comes down to how long that exhilaration lasts after the TV turns off or the Uber drives away, and if it’s worth more to you than the price of a MetroCard. 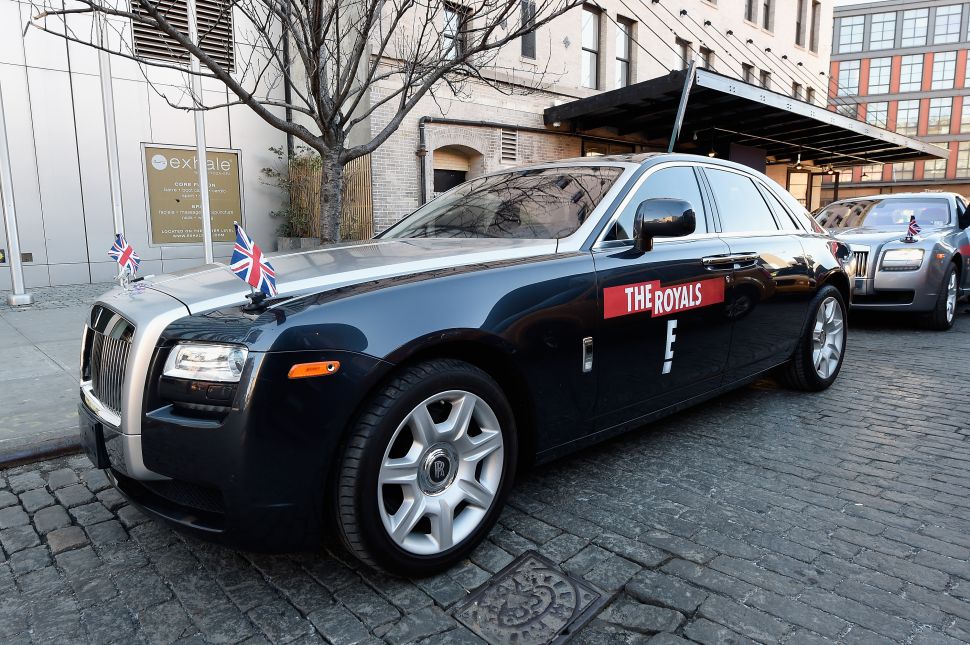 Filed Under: TV, Kate Middleton, Keeping Up With the Kardashians, The Royals