An East Village building that exploded this afternoon, spurring a seven-alarm blaze, had failed an inspection of a new gas line by Con Edison just an hour before the explosion, Con Edison President Craig Ivey said today.

Con Edison, the gas and electric utility, was at 121 Second Avenue around 2 p.m., approximately an hour before the 3:15 p.m. explosion, to inspect plumbing or gas work done by contractors within the building, Mr. Ivey and Mayor Bill de Blasio said today during a press conference near the scene. A new, larger gas service was being installed, and the building already had a separate existing gas line, Mr. Ivey said.

“The new installation did not pass our inspection at that time, so it meant it wasn’t ready for gas to be introduced,” Mr. Ivey said, later adding that gas was introduced to the head of the service, just inside the wall of the building.

Mr. de Blasio emphasized that the work on the building was being done by private contractors inside a private building.

“But the initial preliminary information is Con Ed inspectors arrived at the site earlier for a separate reason entirely, found the work to be unacceptable, gave instructions as to what changes were needed—and that was an hour or more before the explosion,” Mr. de Blasio said.

Mr. de Blasio said the city believes the work “may have been gas and plumbing.”

There were no reports to either Con Edison or 911 reporting the smell of natural gas prior to the explosion, Mr. de Blasio said.

Twelve people have been injured, three of them in critical condition. Two of those with critical injuries have burns to their airways, Fire Commissioner Daniel Nigro said.

The explosion today comes just over a year after another gas explosion, in East Harlem, killed eight people. 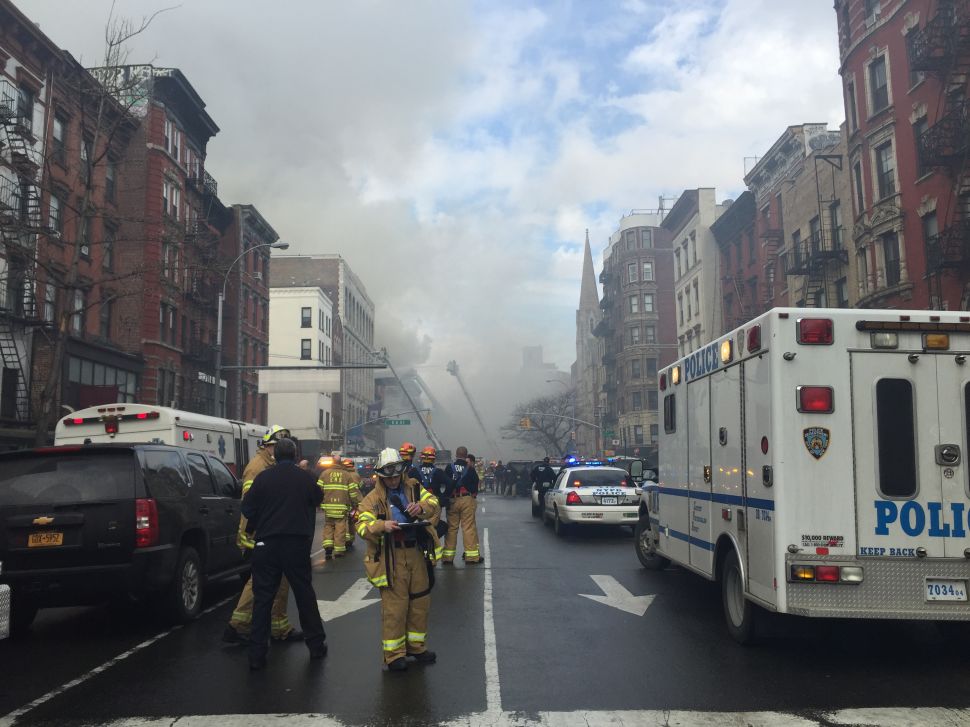