On Saturday Pulse New York’s organizers announced painter Elisabeth Condon as the winner of the 2015 New York Pulse Prize. The prize awards $2,500 to a standout artist presenting in a solo booth each year, and is selected by a jury of four. This year, Ms. Condon’s colorful paintings, four ink-on-vellum drawings, and red toile wallpaper, all inspired by her travels to Shanghai, takes the top honors. The work is being shown by Miami’s Emerson Dorsch Gallery in booth A2, adjacent to the fair entrance.

The paintings are displayed against a backdrop of red toile wallpaper, which features drawings from Ms. Condon’s sketchbooks. Notes from Shanghai wallpaper includes imagery of paper lanterns, bicycles strapped with boxes and goods, elements of the natural landscape, and skyscrapers of the Shanghai skyline.

Juxtaposed with the red wallpaper are Ms. Condon’s brightly colored paintings, created with poured ink, oil, acrylic, watercolor, glitter, and in some cases mineral elements. Recognizable elements from the cityscape appear within the organic shapes and abstractions created by the bleeding paint, like the iconic Oriental Pearl Tower in Electric LotusLand (2014) or the bow of a ship from the harbor in Elephant Path (2014). Her work Ethereal Body sold on the first day of the fair, March 5.

“Elisabeth Condon’s new paintings are spectacular,” said Ms. Erf in a statement. “They convey a deep understanding of Chinese literati and postwar American painting traditions that’s surprisingly fresh and completely her own.”

The artist, who works between Brooklyn and Tampa, was among 14 artists nominated for the prize. Previous winners include Andrea Canepa, Hassan Hajjaj, Duke Riley, and Cristina de Middel. 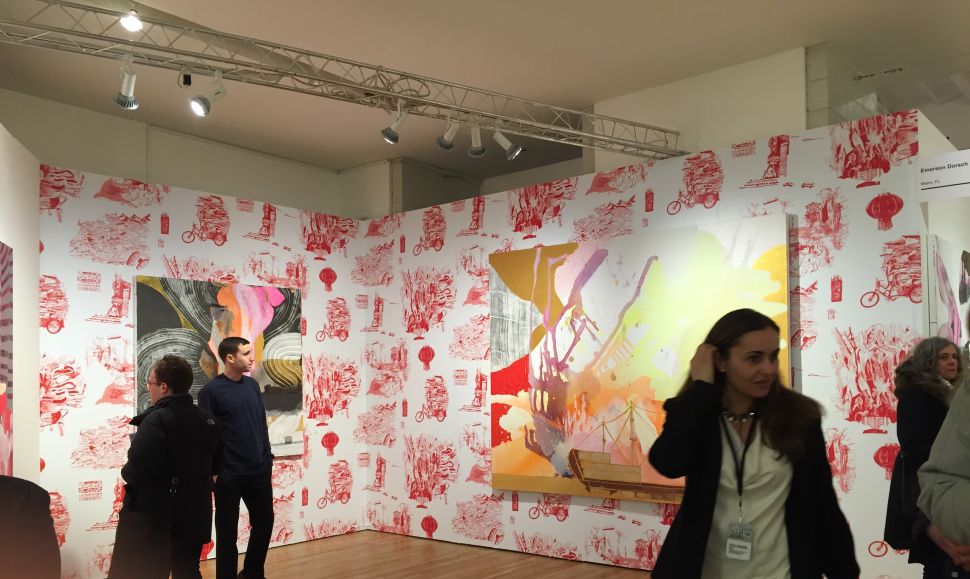