I empathize with Cyrus Beene the way that so many of my friends empathized with Walter White: they’re both men who do terrible things, but they do so out of a twisted devotion to their families, so it’s hard to hate them altogether. Objectively, I understand that Cyrus’s crimes and lack of empathy makes him a pretty terrible human. His emotional abuse toward James is unforgivable, and I have no idea how he’s managing to raise their daughter on his own without there being some serious child neglect going on. But the thing is, Cyrus knows how awful he is. He talks about that regularly. And every time a Scandal episode shows us flashbacks to his past, it becomes increasingly clear how much internalized shame and self-loathing he’s lived with forever, and that seems like the true motive for his behavior. It’s a testament to Jeff Perry and Shonda Rhimes that they’ve created such an evil character who still feels sympathetic, but that’s the beauty of Cyrus.

Michael, Cyrus’s shotgun spouse, deserves better. We’ve spent little time with him, but what we’ve learned this season is that he grew up in a small, homophobic town, lost his relationship with his small-minded, homophobic parents, turned to sex work in order to make ends meet in D.C., and sold his soul to Elizabeth North for an even bigger paycheck. He’s had to struggle to survive in a way that Cyrus — a man who came out late in life, after already securing a huge amount of privilege and power for himself — really hasn’t. Sure, it is sad for Cy that he had to marry a woman he didn’t really love before he could live his life authentically and openly, but he’s always had people he could turn to in crisis. Michael doesn’t seem to have that, and seeing the cruelty he endures from his family made that even more clear.

And because he isn’t actually a monster, Cyrus gets this, too. While getting married for a third time isn’t actually something he wants — particularly not the public White House wedding Olivia and Mellie orchestrated — he goes through with it to help someone who he recognizes has more goodness in his soul than Cyrus will ever have. No, Michael shouldn’t be subjected to a loveless political marriage, but a guaranteed, secure living situation and a benefactor who, at the very least, doesn’t hate him, is certainly better than nothing. So while the wedding planning and all related events could not have been more cringe-worthy to witness, by the end of it, I felt comfortable giving this union my blessing.

I was specifically moved by Cyrus’s unofficial pre-wedding vows to Michael, which essentially boiled down to, “I hurt the people I love, so because I don’t love you, we’ll be able to co-parent and care for each other without destroying each other’s lives.” He makes it sound like he only hurts the ones he loves, which we know is far from the truth, but he does have a special knack for torturing those closest to him. And this is an instance in which the emotional distance between the two of them will likely result in a happier outcome for all parties involved.

The message of this scene is not unlike the drama that has unfolded between Meredith and Derek on Grey’s this season, particularly these last few episodes. After deciding that they each needed to follow their careers and physically separate, Meredith’s been on a streak of saving lives at the hospital. It was a streak that ended this week, likely due to the stress of thinking that her husband, now living in D.C., is cheating on her. (A strange woman did sketchily answer his phone, after all.) But last night we finally learned that it was, in fact, all a big misunderstanding: when presented with the opportunity to cheat, Derek remembered just how much he truly loves his wife and their family.

Derek and Meredith’s undying love for each other is clearly the source of all of their problems, and as someone who, prior to this season, was only a casual Grey’s viewer, I have the ability to look at their relationship from a relatively neutral position. What I see is that they truly do function best without each other. Derek’s absence has made Meredith a better surgeon than she’s ever been, and Derek is accomplishing wonderful work on his own in D.C. By contrast, when they put their relationship before their professional lives, they are completely miserable. They try to make each other happy and end up destroying all of the capacity for happiness within themselves. The only way they seem to be able to function peacefully is when they put themselves first, which isn’t particularly romantic.

But if all of Derek and Meredith’s problems can be attributed to their love for one another, the fact that Cyrus and Michael have a much colder relationship may actually help their marriage survive. They already understand that they’ll need to lead separate lives, and they won’t worry about hurting each other since they already care so little about each other. But having that independence within the security of a marital commitment means that they will be able to help each other when the need arises. Cyrus and Michael care about each other just enough to be good to one another without risking the damage that Meredith and Derek have caused each other over the years. It’s a cynical take on relationships, particularly for the Shondaland universe, but you can’t argue with what works. 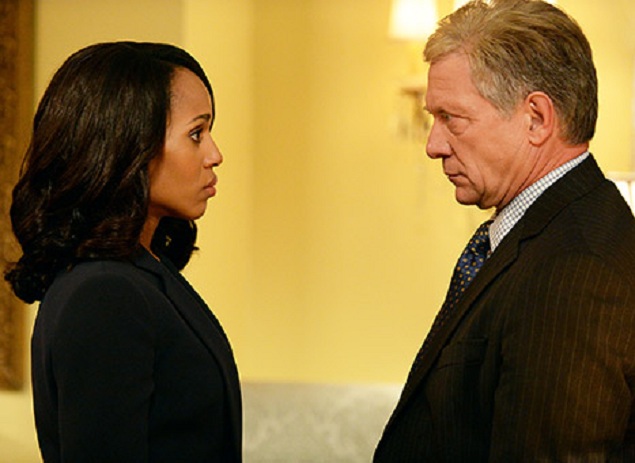