Beckies and Bunkies, this is it!  We have reached the end of the first season of (literally) America’s favorite television show, Empire.  They jammed-packed the season finale with enough fol-de-rol and fiddle dee dee that, honeslty, to expound upon each plot point would have us talking about Empire until, gosh, I don’t know, Season 2 begins. Before I even attempt to crack the code of the two-hour finale, let me first tell you that spoilers are ahead. I say this now as opposed to every other week that I have written about this show, because finally this week some truly plot-twisting stuff happens and I’m not talking about finding out that Gabby Sidibe has a white mom. There’s actually so much to go over that I feel like a twin duvet on a king sized bed. I just can’t cover it all! (Goodnight, everybody. Tip your waiters and spay your pets!) You had attempted murders, accidental murders, excuse me, murthers (that’s Shakespeare if you’re nasty), hostile takeovers, catfights, wordplay, foreplay, sex, GAY sex (so HTGAWM!),  Jennifer Hudson holding a stack of bibles, Snoop Lion (IS HE RELATED?!),  Rita Ora (not busy per the usual), Patti LaFreakingbelle, women playing pool in bikinis, Cookie in upwards of four furs (When does Cookie buy all her fur?! She just got out of jail and now she has 40 furs? Every rabbit in Upstate New York is moving to Florida with Raven Simone right now.) It was all just too much.

After 12 episodes of essentially playing the same scenes in different scenarios, the characters of Empire finally experienced the sky fall that they have been chicken little-ing about all season (that’s a metaphor, Lord knows with this show).  Everyone’s world got turned upside down right as the company was about to go public.  I have to give the creators of Empire credit on this one. By keeping the story at a 1 and the drama at a full-blown Courtney Love flailing on a bathroom ottoman 10, they practically made the audience keep tuning in. After edging the whole world week after week, they let their story explode in the last two hours. It was pretty much what you thought would happen, people turn on each other, people forgive each other, people sing uncomfortably close to each other faces.  There were, however, a few exceptionally clever reversals. And this above all else, more important than all of the religious lyrical dancing getting JHud a recording contract,  all of the Hakeem and Halle Berry sex, all of the Lady Macbecky being pregnant (with murder), is what I need to talk about with you.

First things first: Lucious, whose name I’ve been spelling wrong all season, doesn’t have ALS! He has MG. (I also don’t even know how to spell what ever the hell disease that white lady doctor said so let’s not go into it, but if you’ve got a bucket I’ve got a challenge.) Lucious isn’t going to die! But if he’s not gonna die, how will we ever have justice for all the bad he’s done?!  Lucious was allowed to be bad as long as he was badding himself into the grave IMHO.  Surely, there is something else coming to him…surely.

This revelation is obviously a real shake up for the Lyon clan. Lucious decides to break the happy (?) news to his family around his much-prized $20,000 dinner table. Lucious then presents a symbolic gift to each one of his family members as a way of asking their forgiveness. And here’s where Empire, a mash up of all things Shaking and Spearing, a show that loves to remix other great stories in literature for it’s own benefit, begins to show its actual hand. Let’s go gift by gift.

Hakeem:  He receives a chain with wings on it. Cool dad, thanks, I still hate you but I love chains! But wait Hakeem, there’s more. You don’t just get the chain; you get a JET! Call Naomi Campbell on the landline and get your haircut for the one-millionth-time cause you can go like wherever you want for no reason! This reminds me of something. Oh, what could it be? A father giving his son wings to escape… Could his name be Icarus? Yes of course, Icarus, who was warned not to fly to low (no ambition, like Hakeem at the beginning of the season) or too high (unruly ego ala Keem at the end of the season). And we all know what happened. Icarus flies too the close to the sun where his wings melt and he falls into the sea. Bye Hakeem, I hope there are barbers at the bottom of the metaphorical ocean.

Andre: Andre gets a large, religious cross and some money to go to a foundation for blah blah blah. Lucious, who constantly refers to himself as God,  knows that Andre, having emotionally fallen in love with music therapist/choir soloist/hip hop diva JHud, is now worshipping God (“actual” God).  That doesn’t sit well with Godscious, so naturally he gives his son a literal cross to bear. Andre is Lucious’s Jesus, the son who makes a sacrifice for the greater good and dies doing his father’s will.  I just hope Andre can rise again. Give it three days or three seasons, whichever comes first.

So, there we have two sons being given a symbolic death sentences, which leads us to…

Jamal: Jamal gets a scepter with a Lion’s head on it. Congratulations, Jamal, you just won Survivor: Hip Hop Island! Gay people win stuff too! Gay people can run companies! Gay people can withstand garbage cans and rappers named Black Rambo and your father singing an octave down when you’re trying to duet! As symbols go, I would say that the Lion’s head reminded me of The Lion King which is actually a really clever retelling of Hamlet. So that fits perfectly into the Empire world (clock the skulls all over the sets on your repeat viewings). Hamlet, who loves his mother, but constantly feels betrayed by her decisions, runs a great parallel to Jamal’s relationship to Cookie. But if we are going all HAM on this, Lucious is the one seeing ghosts. So, I’m not sure which one is supposed to be or not to be.

And what does Cookie get as a gift from her ex hubby? A gold rose, a rock to roll up a hill, a gift card to Red Lobster? She gets a pillow. Cute! Well, she got it ‘cause she tried to smother his ass with one the scene before. Cookie, who has recently had life-altering sex with Derek Luke in a fur on a bear fur rug near a fire that I’m sure used fur for kindling, who has gotten axed from Empire for being fabulous and sexy and the best actor this type of show has ever seen, heard Lucious admit to killing Bunkie (COUSIN BUNKIE!) and very much wants revenge for all the bad Lucious has done to her. Scenes later, when American Cookie and Co all team up against Lucious in a coup to take over the company, revenge she very much gets.  She even enlists Boobookitty to help out. Though not before throwing a drink in her face and pummeling her on a pool table. (One day I will write a think piece on female sexuality and pool tables in Empire. It will be called “CueCueSticky.”)

As an audience, we knew that Lucious would one day get what was coming to him, we just always thought it would be in form of death. So, where does a healthy, not-dying Lucious bring our Shakespearean tale of epic revenges and familial upheaval? Why to reversal #2 , of course! For 12 episodes, we have thought that this soapy nighttime drama was an ode to King Lear. That’s the way it has been advertised, that’s the way it has played out until now. Lear dies broken and alone, so naturally Lyon must too. However, with Lucious alive and well, we begin to see that maybe the creators had another idea in mind the whole time. Its Shakespearean structure was just a set up for its actual intention, its biggest reference, its formal thesis.

At a press conference, early in the finale, Lucious tells a group of reporters that soon Empire Entertainment “will be synonymous with American culture.” Later in the episode, as Lucious stands in front of the stock market, the finicky heart of our capitalist society, he is told that all he has to do is push the green button. The GREEN button. Suddenly we see flashes of Lucious’s whole life that have led him here. A poor black kid from the hood who made it out to become one of the most powerful men in the America. The green button. The green button. The green light.

Gatsby. Lucious Lyon is Jay Gatsby staring at that green light. A self-made man living the American dream on shady business deals and wild ambition, who is as lonely as he is rich. A man who as an orphan changed his fate along with his name, who fell in love with a girl who will never be the version of perfection he has built up in his mind.  A girl who in a catfight to rival any scene from Dynasty broke a string of pearls and watched them scatter on the ground. Lucious Lyon is a man who in spite of his success can’t stop trying to recreate the past—or kill it or bulldoze through it. Empire, in its final two hours, twisted itself from a show about a Lear dividing a kingdom into the story of the forever broken American dream.  Broken because money comes before family, power comes before generosity, and dreams come before reality.

One of the last images of the season is a flashback to Jamal first walking down the stairs in those famous heels that got him thrown in the trash. The camera reveals his face, a wide-eyed little boy with a bright green turban wrapped around his head.  A green turban.  If Lucious is Gatsby, could his gay son be the green light? Whose dream is this? Everyone has a different green light. So maybe this is Lee Daniel’s dream: the thing he’s running toward, the history he needs to fix, the dream he’s desperately trying to make real?  The gay little boy who could grow up to be king. It’s a powerful and subversive thought to send out on the most popular show in America.

But back to Lucious.  He ends up in jail vowing to return to get his revenge on his family. And we know he will. He will for at least six more seasons, but not without the flashbacks of all the wrongs he can’t erase, all the people he can’t make forget, all the things that money can’t buy. And so we beat on, rappers against the current, borne back ceaselessly into the past. 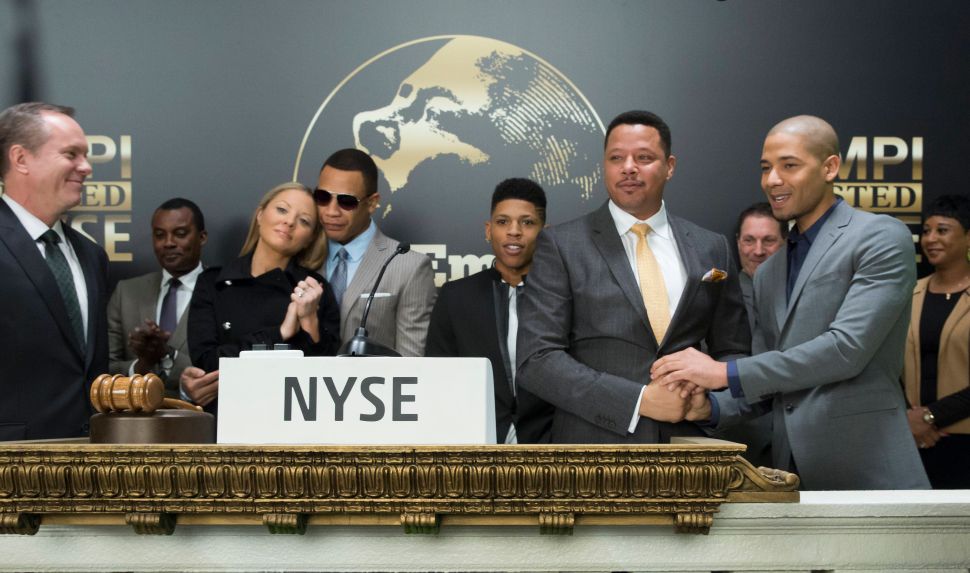