Have you guys seen the House of Cards season finale yet?

No?! Oh my god, how come? What are you doing with your life?

It only takes 6.5 hours to watch The Unbreakable Kimmy Schmidt, and you add that to the 13 hours of HOC’s third season, you don’t even equal a whole day’s worth of TV! What else are you doing with your time?? Sleeping? Eating? Watching The Jinx: The Life and Deaths of Robert Durst on HBOGo? (If so, that’s only like another 5 hours, so you just need to pull an all-nighter to cram it in.)

And House of Cards has been out a whole week now. And yet I’m as paranoid as Frank Underwood when *SPOILER* turned into a gambit to *SPOILER* for the Russians to *SPOILER SPOILER* in the Middle East.

Yeah, it looks like we’re going to have to start addressing the Spoiler Issue. Again.

In his essay for Medium, “How Netflix Broke the Unbreakable Kimmy Schmidt,” Rex Sorgatz gave a pretty comprehensive history of the modern day spoiler paradox and sketched out our current samizdat conditioning about streaming shows:

Back in the aughts, we survived a similar crisis, when two cultural events coincided:

The collision of these trends triggered a nuclear reaction — a pop culture fission, spewing immense heat. People got very, very serious about The Spoiler Alert.

The burgeoning recap society, in particular, was put under immense scrutiny. The fracas reached peak intensity when The New York Timesrevealed the plot details of unaired episodes of Mad Men. Fans of the show were outraged. It was bad — so bad, the critic was exiled deep into theHighbrow / Despicable quadrant. The worst quadrant!

Mr. Sorgatz goes on to extrapolate how fear of Spoilers, which seem to bring out the Internet’s collective itchy trigger fingers–has trickled down (or maybe saturated through) the social media chain, ramping up the stakes in the process. After all, you can avoid New York Times reviews if you don’t want to find out what happens to Don Draper, but what about Twitter? Facebook? A Gchat from your brother, who assumed you watched the whole season as voraciously as he did?

This is a problem that I’ve agonized over before, both in terms of how I tell writers to approach reviewing shows episodically as well as my own social media inclinations. But the answer, unfortunately, isn’t the one Mr. Sorgatz came up with:

Every day, a new episode is released,
always at the same time, and blind to time zones.

Can you imagine? The conversation around this viewing window would be massive, almost unbearable. Fans would feel compelled to catch up every night, so as to be involved in tomorrow’s discussion. And if you missed a day or two, catching up would be painless.

A resurrected, reconfigured schedule — modeled on the miniseries, but contemporized for real-time culture — would unleash the potential for conversation. The lost art of appointment viewing could return. (Potential downside: Congress might have to go into recess — not much downside!)

Agh! No! The point is to move AWAY from appointment-based viewing, not revive it as some nostalgic model for egalitarian television viewership. All you need to know about how that plays out can be seen on nights where we still have to watch television “events” like the Oscars or The Superbowl or Saturday Night Live’s 40th Anniversary…an inevitable slog that every year seems to be more of an homage to The Way Things Used to Be instead of The Way They Are.

The only thing appointment-based viewing would do is alleviate our binge-watching guilt about Spoilers: if you ruin someone’s season of Scandal by tweeting about it a day after it came out, well, that’s on them for not having watched the show. You don’t have to feel bad about participating (or anticipating) in the Airing of Thoughts you have about an episode of television.

Most content we refer to as “television,” by the way, still works off the “fans would feel compelled to catch up” argument. Trying to shove everything back in Pandora’s Box of Social Media Etiquette is not how Netflix, HBO, CBS or any media organization should ever run their business. Scandal here is a good example: the way ABC creates and promotes hashtags in real time (shown as chyrons on the bottom of the screen) serves as a beacon for people on Twitter who want to discuss the events that happen in the episode.

Last May, Twitter conducted a study (along with FOX and db5) and discovered that 85 percent of people tweeting during prime time are doing so about television, with 72 percent doing so when watching a live show. That’s compared to the 58 percent that are talking about “time-shifted” programs that appear on streaming sites and can be watched all at once. But here’s the interesting statistic:

After seeing TV-related Tweets, 90% of respondents took subsequent action such as watching a show they’ve never watched before, resuming watching a show that they’d previously stopped watching, and/or searching for more information about the show online. In fact, one-third of respondents reported having changed the channel to watch a show after seeing Tweets about it.

That, to me, is one of the greatest things about binge-watch culture: it’s not quite populist, but it is egalitarian. ANYONE–provided they have accounts to the streaming services (and if they didn’t, wouldn’t likely care about spoilers one way or another for a show they don’t watch)– can join the conversation, but it’s the super fans who are in the driver’s seat. The more devoted you are to House of Cards or Kimmy Schmidt, the bigger fan you are, the quicker you will finish the series in order to talk about it. There is none of this East Coast/West Coast programming bullshit because it’s already available to everyone at the same time. The only factor is your time: how much of it are willing to spend watching one series, all at once?

It’s a huge time commitment that not everyone can make, and I get that. And I’m all for finding ways to talk about shows– on social media, on tvDownload, in person– without giving away giant plot points to someone who ostensibly really wants to see the program but hasn’t gotten around to it yet. But let’s be clear, it’s like Frank Underwood said this season (in a moment that’s not really a spoiler!): “You are entitled to nothing.” Just because you haven’t finished House of Cards doesn’t mean society can’t handle the episodes all being released at once. It means YOU can’t. If you are so very, very worried that knowing a celebrity cameo will ruin the entire season of something for you, stay off Twitter until you get your shit together and watch the damn thing. Stop trying to fix this system and watch the damn show already. And once you do, please stop feeling bad that you got to the finish line before anyone else. Because you’re not actually feeling guilty, you are feeling frustrated. You WANT someone to talk about these shows with. You WANT everyone to be on the same page. If only companies could control how much of a season we could handle at one time, parceling out the content in a palatable structure that we could all handle!

Or you could just see if Netflix’s House of Cards Spoiler Foiler is still working from last season, which scanned your Twitter timeline for any mention of the show and hid it behind a SPOILER ALERT banner you’d need to click through to read. At least that seemed like a proportional/original way to address the issue, instead of capitulating to the social media scolds.

Sorry, no. We are all adults here. If you finished House of Cards, guess what? You are still entitled to nothing, least of all a change in Netflix’s content distribution model so you can control your bingeing impulses. Shit has already changed; we can’t go back to the way things were watched, nor should we. We can only go forward, letting the most devoted TV addicts among us drive the conversation, as we always have, towards the shows Worth Your Time.

When you make the time is still your call. Just please don’t ask that creative forces slow endure your finger-wagging lectures about spoilers when you are the one choosing to spend your energy on monitoring, not enjoying, this new moment in pop culture. 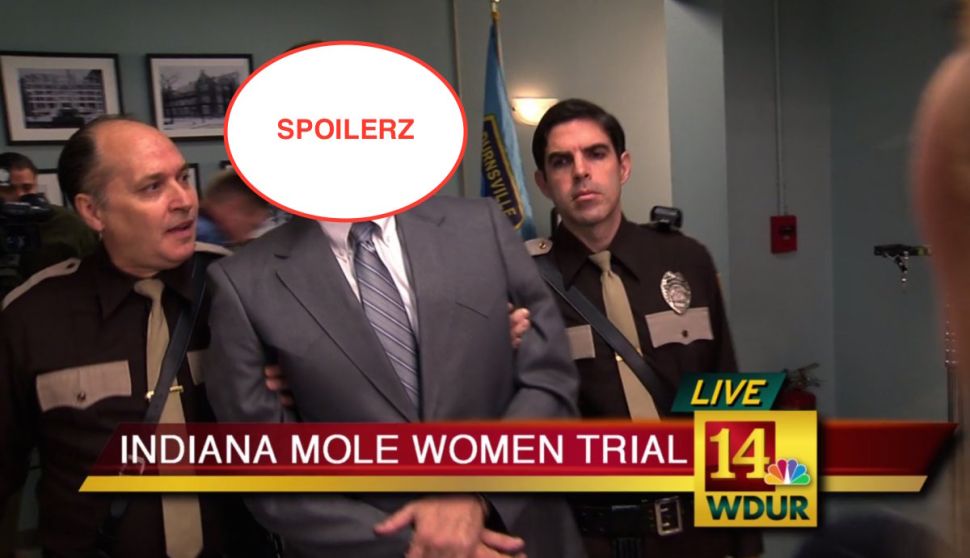