Understanding global conflict is often difficult, but when broken down, at its core, it’s always about two sides who want very different things.

The Travel Channel serves up it’s newest entre with Breaking Borders, an ambitious undertaking in which a  journalist and a chef  journey to a global hot spot and host a meal for guests who are firmly planted on opposing sides of a serious conflict with the hope that peace and understanding will be gained as the parties break bread together.

Breaking Borders follows seasoned journalist Mariana van Zeller and acclaimed chef Michael Voltaggio as they travel into conflict zones to get the story behind the story.

Executive Producer of the series, Michael Yudin, reminds viewers that unfortunately unrest is a global problem with far too many places mired in conflict. “Sadly, it’s a very long list with no shortage of places to go.”

On the plus side, he says that while these regions are known for their unrest, “They’re all beautiful places with amazing people.”

In each episode, van Zeller and Voltaggio take viewers on a journey through a different region in conflict. They discuss the pressing matters of the area with people directly affected by the unrest, while exploring the history and culture that has created it. As van Zeller digs deeper into the issues, Voltaggio goes on a culinary adventure, collecting ideas and ingredients to create a unique meal reflecting the culture and inspired by the people he’s met.

The series premiere features a dinner bringing together Palestinians and Israeli settlers living in the West Bank. Their guests include a Jewish winemaker who lives with his family in the West Bank, a Palestinian bookstore owner, and an Israeli who advocates separate states for Israel and Palestine.

While the meal is kosher, not everything is so as the participants get into a heated discussion, each attempting to explain their position to the others. Voltaggio keeps the food and wine flowing while van Zeller does her best to mediate, but in no way guide, the conversation. The issue is so extemely complex and so deeply rooted in this culture that it obviosuly cannot be resovled during the dinner hour, but the mere presence of all parties and the willingness of them to actively participate in this type of exchange is a triumph in and of itself. And, it’s quite stimulating and interesting to watch.

Throughout the subsequent episodes the pair travel to Belfast to facilitate a gathering of Catholic Republicans and Protestant Nationals, and to Rwanda where genocide divided the Tutsi and Hutu, and where now representatives of the two groups share a meal.

Also on their tour, Zelier and Votaggio make trips to Cairo, Sarajevo, Cambodia and Cuba, as well as making a stateside stop along the Arizona/Meixco border.

Yudin assures viewers that while Breaking Borders is about exploring the deep history of these regions it’s not about making judgmental statements via government involvement. “This isn’t about politicians. It’s about real people; real people who really just want to live in place, take care of their families and keep their family members safe.”

Breaking Borders is many things – a travelogue, a cooking show and a dinner-table summit all rolled into one. Each element – the history lesson, the culinary adventure and the mediation mission — enhances the others, resulting in a thought-provoking and highly entertaining hour.

Yudin chokes up a bit as he admits, “I get emotional about this show because we found that just the simple act of getting people to come together and share a meal together with Michael’s cooking, Mariana’s guidance and some wine, and the conversation really starts flowing. What I loved most about every episode is that everyone has at least of glimmer of hope that things can get better. That’s the most important thing to take away from this show.”

Breaking Borders premieres Sunday at 9/8c on The Travel Channel. 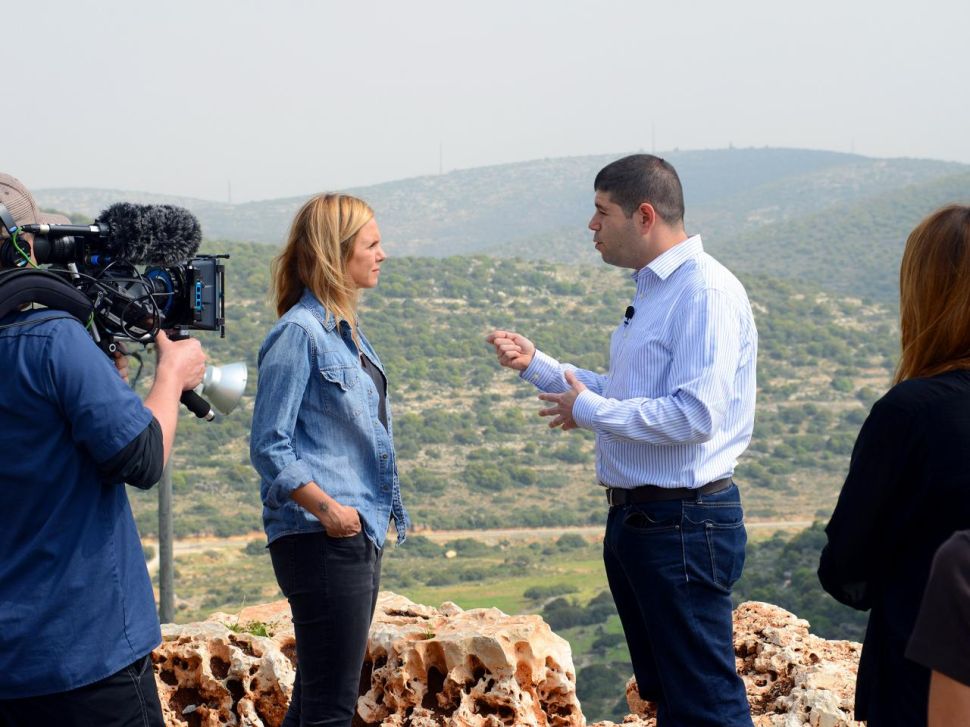