For the first-time visitor to Disney World in Orlando, Fla., there is an avalanche of information to digest. Guidebooks, websites, friends and family contribute their well-meaning advice. Few things in life require this level of pre-planning. People have planned weddings with less work. Royal weddings. The pressure is enormous. You will do Disney right or you will have failed your family. Or worse, you’ll have to go back and try again. Just kidding, Disney-fans, don’t hurt me.

Much of the information you’ll find, though, is trying to help you maximize your time there, to fit everything in and meet your goal of seeing and doing it all. Be there before rope drop (at 6 a.m.!). Stay on property and take advantage of your hotel’s activities. Visit multiple parks in one day.

These are all tips aimed at the type of person who wakes up on a Sunday at 6 a.m. with a calendar full of activities for their children or who asks other parents for ideas on what to “do” with the kids during school break as if “let them play with all of their toys and watch as much TV as they want” isn’t a good enough option for their snowflake.

This is not me. Perhaps this is not you, too. Perhaps you love your children and want to take them to the happiest place on earth but not at the cost of your own happiness. Here are five tips for the lazy parent to actually have fun at Disney World.

1. Do all possible character breakfasts or lunches at the parks you visit. Eat with the Winnie the Pooh characters at Crystal Palace in Magic Kingdom. Dine with the Disney Jr. cast at Hollywood & Vine at Hollywood Studios. Have a meal with Mickey and the whole gang (except, oddly, Minnie Mouse) at Tusker House at Animal Kingdom. Hang with the Princesses at Akershus Royal Banquet Hall at Epcot.

Let’s be real: food at Disney World is…not the draw. Everything you eat will already be overpriced so you may as well get an experience for your money. Plus, and this is where the lazy parent really gets their money’s worth, you won’t have to wait in a line to meet each of these characters later. Your kids will get a full-on, personal character experience which will beat out the six seconds they will spend with them at the front of a long line. At Hollywood & Vine, Princess Sofia commandeered my iPhone and took about 15 selfies with my 5-year-old while we also worked on hooking her up with Jake the Pirate. You just saved hours of time. Bravo, lazy parent.

2. Don’t have meals, character or otherwise, at hotels other than the one at which you are staying. This seems so obvious in retrospect, but Disney planning can make a person a little crazy. Lots of people suggest doing breakfast at Chef Mickey’s at Disney’s Contemporary Resort. I’m sure it’s just terrific. But consider this: Breakfast at another hotel means waiting for 15-20 minutes for a bus at your hotel then taking a 20-minute bus ride—plus eating there, another wait afterwar and another bus ride to the park. It may not seem like much when you’re reading this from the comforts of your home. But when you’re wrangling your kids in transit for over an hour for the privilege of eating with characters you can see elsewhere, you’ll feel differently. This is an option for people who need to “do it all.” If you’re one of those people then you’re reading the wrong Disney piece.

3. Don’t give up. Laziness goes hand-in-hand with under-planning and Disney tends to punish the under-planner. But the secret is that Disney also tends to reward the last-minute, um, no-reservationer. I hoped to book the princess makeover at the Bibbidi Bobbidi Boutique inside Cinderella’s castle during our trip for my 5-year-old daughter. It was her birthday and she had seen pictures of her cousins with their hair piled high on their heads, in princess gowns, lounging on a chaise, and she asked to have that, too. I called and I called and all appointments were booked for our days there. The reservationist suggested I try the Downtown Disney location. Now, maybe an ambitious mother, the kind who has to make all of her child’s dreams come true would go to Downtown Disney. Me? I shrugged my shoulder and told her, “Sorry, no updo for you, kid.” But when we rolled into Magic Kingdom around 10 a.m. on a Saturday, I maneuvered us toward the castle to try for a walk-in appointment. They couldn’t take her right then but, amazingly, we booked a 2 p.m. appointment for later that same day due to a cancellation. When we got there at 1:45 p.m., there was a long line out the door of people trying to do the walk-in thing. A stern Fairy Godmother with a notepad was telling people it would be impossible to accommodate any additional princesses today. The moral of the story is you can be lazy, you can take your chances and walk-in to restaurants and experiences, but you have to do it on the earlier side before the truly lazy moms get the same idea.

4. Start walking to your bus when the fireworks start. I know, it’s all just so magical. You’re on Main Street USA. Cinderella’s castle is in the distance. The light show begins. Your kids start to ooh and aah. That’s your cue, lazy parents, start walking. Kids can see the show while they walk the same as they can standing still. So unless you want to double or triple your wait time for your bus back to the hotel, the smart move is to watch the show in transit.

Disney World shouldn’t be a job and planning for it certainly shouldn’t be the second career some people turn it into. Follow these lazy principles and everyone will have a good, mellow time. If the goal is to actually vacation on this vacation, these tips will help make that happen. 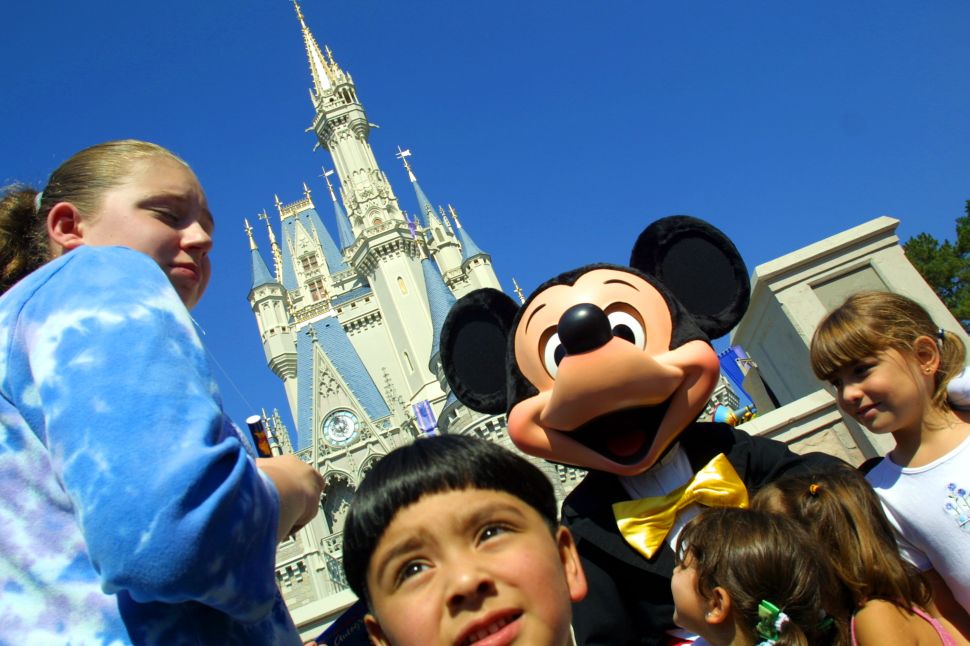